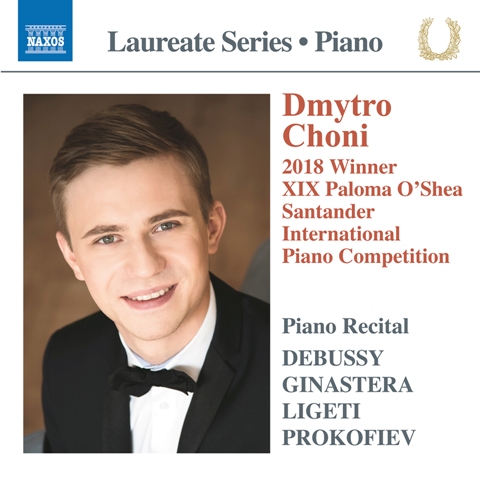 This is a rather different CD for Naxos. Rather than focus on a single composer or a group of composers of the same nationality, even if the performer is little-known to the general public, this one focuses on the artist himself.

Dmytro Choni is a young Ukrainian pianist, touted on the album cover as 2018 winner of the XIX Paloma O’Shea Santander International Piano Competition, a contest I’ve never heard of before. His recital attracted me because it focuses on 20th-century composers even though two of them—Debussy and Prokofiev—began their careers fairly early in the century, the former moreso than the latter.

Choni’s performances of the two Debussy pieces are quite good; he captures both the notes and the mood of these pieces very well, although I thought the opening section of Reflets dans l’eau sounded just a bit too loud and too glib. He really shows his mettle in the Hommage à Rameau and Mouvement, which he plays nearly as well as Michael Korstick.

But Choni really takes off in the Ginastera Piano Sonata No. 1. This is a piece that is, stylistically speaking, right up his alley, with strong rhythms and bitonal but not forbidding harmonies. For a Slavic pianist, he also captures Ginastera’s Latin rhythms very well. In Ligeti’s Arc-en-ciel, however, I didn’t think he captured the mood well at all.

If one would expect Choni to be on target in the Prokofiev sonata, however, one would be 100% correct. This is mother’s milk to Choni, and he engages in it nearly as well and as fully as Natalia Trull did in her phenomenal set of the complete Prokofiev sonatas on Sorel Classics. If Choni played a Prokofiev sonata at the Paloma O’Shea Santander competition, it would be small wonder that he won. Every note and phrase sounds exactly right, and he is fully engaged with the music emotionally.

Methinks that one reason for Naxos’ promotion of Choni via this CD is that they hope to use him as a repertoire pianist in future discs. I hope I’m right. He has a lot to offer.