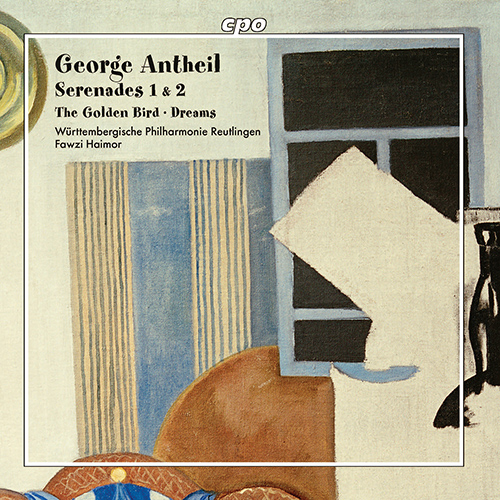 It almost boggles the mind to realize that the music of George Antheil has become mainstream. For decades, the only piece that anyone paid any attention to was his Ballet Mécanique, and that only because it was attached to a surrealistic film of the same title that was suddenly being rereleased on VHS tapes (and later, DVDs), but in the past few years—and it really has been only a few, perhaps six or seven—a large number of his other works have been recorded, most of them for the very first time: Archipelago, Fireworks and Profane Waltzes, The Golden Bird, Jazz Sonata, McConkey’s Ferry, Piano Sonata No. 4, Death of the Machines, The Airplane Sonata, Sonatina for Radio and Symphonies Nos. 3, 4 & 6.

This new CPO release gives us more pieces, the major ones being the String Serenades of 1948 and 1950. By this time, Antheil was past his edgiest, most experimental period and had settled down into writing “Americana”-type pieces in more conventional forms. Some of the music was good and some of it was fairly conventional. One of his stranger pieces during this time was the film score to an independent movie, The Specter of the Rose, but both movie and film score did poor business.

The String Serenade No. 1 is typical of this period. It is a fine, solidly-crafted work using a little bitonal harmony but more or less fashioned in the traditional form. It is still very good music, but it sounds more like certain works by Creston, Harris and even Britten and not like the Antheil of the 1920s and ‘30s. Apparently, he had reached a point where wanting to have his music performed overrode his desire to shock his audiences.

But “entertaining” Antheil is still worth hearing. He didn’t compromise his principles all that much; he just softened his all-out maniacal tendencies for more conventional form. Within those forms, the music still had quite a bit of invention, but it just lacked his individual stamp. “Popular” Antheil is still a bit edgier and less conventional than, say, the popular works of Morton Gould or Aaron Copland. The second Serenade, written for a full orchestra. is cut from a similar cloth, but in the first movement in particular seems to be reaching back a bit to his older, more radical style. The second movement of this serenade is surprisingly different for Antheil: slow, quiet and brooding, almost like a late work of Debussy or Koechlin, both composers he admired. Of course, I don’t claim to know what Antheil’s entire oeuvre sounds like, but within my own frame of reference I can’t think of another piece by him that really sounds like this. In addition to the slow movement and soft profile, he also uses very soft wind and brass blends as Debussy did with frequency. There is, surprisingly, a piano solo in it about 3:15 in, uncredited in the booklet, and a bit later a viola solo, also uncredited. The brisk last movement, though energetic and somewhat bitonal in a Prokofiev-like manner, is somewhat more conventional, but by and large this second serenade is a masterpiece in Antheil’s later style.

The lengthy, convoluted and poorly-written liner notes by one Eckhardt van den Hoogen give long and torturous “background” for the other works while obscuring the year of composition, but from what I can gather The Golden Bird seems to come from 1922, the year of his London concert debut. Van den Hoogen does give us the date of Dreams, “a ballet composed in1934,” although the very next paragraph tells us that it premiered in June 1933! I think The Golden Bird may have lost a bit in its translation from keyboard to orchestra, but there are some odd moments of Oriental harmony in it that grab the listener’s attention. As for Dreams, a half-hour ballet written in nine sections, parts of it look forward to his later style (the “Introduction” and “Andante – Allegro molto (Sonatina”) while other portions (“Polka” and “Rat”) look back to his anarchistic days. All in all, the music, though interesting, is very episodic in nature and doesn’t really cohere as a ballet score should. It sounds more like a suite, albeit a very interesting suite.

Haimor and the Württenburg Philharmonic give us clean, brisk, rousing performances of each piece on this CD. Overall, I rate it as an important entry in the Antheil discography despite a few weak moments.