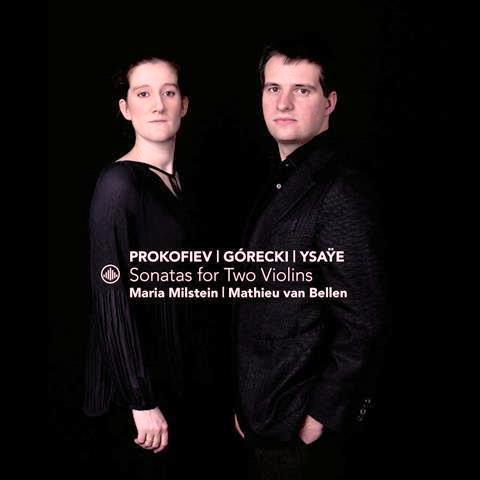 Russian violinist Maria Milstein and her musical partner, Dutch violinist Mathieu van Bellen, team up here to perform three rarely-played works, the two-violin sonatas of three 20th-century composers from different eras. Of the three, the only one I have in my collection is the Prokofiev work. Both artists are avid chamber musicians, Milstein with the Van Baerle Trio and van Bellen with the Busch Trio. In fact, van Bellen plays Adolf Busch’s 1793 Guadagnini violin.

One thing that struck me immediately in the opening of the Prokofiev sonata was these artists’ sweetly soaring legato. The other thing that struck me is that van Bellen plays Busch’s violin with the same rich, slightly thick tone that its previous owner possessed. This almost makes his violin sound like a viola, which to a certain extent is appropriate, since his lines are lower than Milstein’s and thus assign a pseudo-viola role to his instrument.

To be honest, however, I was not as much taken by the first movement as by the second, where they play with more energy, although Milstein continues to soften Prokofiev’s music by giving it a “German” treatment. An aside: since she is Russian and her name is Milstein, is she somehow related to the famed Russian émigré violinist of the past, Nathan Milstein?

Despite my caveat about her reliance on a silken legato, I admit that the duo plays with plenty of energy. And please understand, it’s not that I’m against a good legato, only that I think that taking it to extremes dulls the impact of the music, reducing it from high art to the level of a soporific. Both violinists again play in this manner in the third movement of the Prokofiev sonata.

Having not heard the Gorecki sonata before, I was startled by the fast, edgy opening of the first movement, so unlike his other works. But this was written in 1957, when he was only 22 years old and had not yet arrived at the softer, more relaxed style of his later years. If the style is less individual, the music itself is no less excellent because of that. A couple of minutes into the movement and we encounter the more typical Górecki style, albeit with more bitonal harmony than in his later works, and here both Milstein and van Bellen play with a more intense legato than in the Prokofiev work. The, at the six-minute mark, we return to the edginess of the opening for the remainder of the movement. The second movement is entirely slow, almost minimalist in its inexorably halting repetition of identical or similar motifs, while the third is a medium-tempo piece using a lot of pizzicato effects in a bitonal framework. Towards the end, we return to the fast, edgy music of the first movement’s beginning.

The Ysaÿe Sonata for Two Violins dates from 1915, before he wrote most of his justly-praised solo violin sonatas, and is a much more Romantic work. I didn’t really care for it at all.

In short, excellent playing in a mixed bag of works.