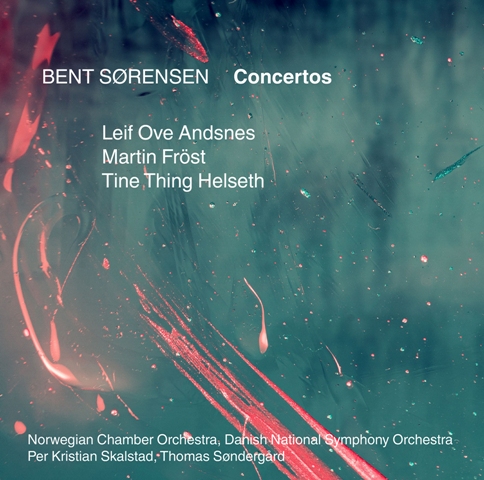 In a world of nearly uniform composing styles, it’s always refreshing to hear a composer who stands out from the others, and Bent Sørensen (b. 1958) is clearly one of those. Indeed, his individuality of expression may be the very reason he is not well known outside his native Denmark, despite having won the 2018 Grawemeyer Award for his 2016 piece, L’Isola della Citta.

Sørensen has essentially taken the French impressionist school of the early 20th century and combined it with hints of Bartók and Ligeti. As stated on Wikipedia, “His mature works create a sense of decay that is emotionally similar to viewing an aging visual artwork…Sørensen achieves this by treating major/minor tonalities with microtonal inflections and blurring the harmonies with glissandi.” His melodic top lines are essentially tonal, but the sliding chromatics of the underlying harmony give one a sense that the music is slip-sliding, very slowly, into quicksand. The contrasting but connected movements of the piano concerto La Mattina is a perfect example of this. Even in the faster second movement, the chamber orchestra rarely if ever plays together as a unit, but is heard in soft, almost ambient passages behind the piano soloist. In this movement, this even includes the percussion, which here includes maracas. What I found fascinating was the way in which Sørensen is able to maintain this feeling of weightlessness or decay despite the clipped, precise rhythm that the maracas provide.

Within a work like this, it’s difficult to say that the soloist is exceptional or not simply because the music calls for subjugation to the mood rather than to impose itself on the listener’s consciousness. Surprisingly, the most concerto-like passage, with very complex and highly rhythmic music, occurs in the “Lento” third movement, whereas the “Andante” fourth movement actually sounds slower. This piece also uses “live electronics” in the orchestra, most noticeable in this movement. In the fifth and last movement, marked “Presto,” Sørensen combines his natural aesthetic with lively, tarantella-like figures—a very strange combination, indeed.

The clarinet and orchestra piece Serenidad is on a different level, perhaps due to the nature of the solo instrument. Here, Sørensen combines his “decay”-like sound with a livelier rhythm from the very beginning. In places, it almost sounds like Messiaen’s “bird” music, with soft but edgy string tremolos in the background and what sounds like someone humming along with the clarinet soloist. In the second movement, Sørensen introduces a quasi-Spanish feel to the rhythm, and overall this entire piece avoids the feeling of “decay,” in part because the chromatic movement is more regular and rhythmic rather than sliding around (think of the introduction to Britten’s A Midsummer Night’s Dream for an analogy of what I mean). This performance is a live one, given in 2014, as opposed to the two studio recordings that surround it.

One interesting thing I noticed about Sørensen’s music is that, although it is quite complex in its understructure, it is often comprised of fairly simple building blocks, sometimes of repeated material, yet he avoids the feeling in the listener than his music is repetitive. It’s a very clever slight-of-hand trick of his. One reason why it works is that he varies his approach (see my notes on the piano work above), mixing in building blocks of different material in different tempi and alternating moods while still maintaining a cohesive piece. In the last movement, after all the activity we just went through, the music slows down and just sort of fades away in what sounds like the middle of a chorus.

Similarly, he creates a different world yet again for his Trumpet Concerto. Take the trumpet’s lead line and just read that, and you’ll be convinced that he has written an almost retro-Classical-era piece, but listen to it with the strange and fluid harmonic underpinning, and you’re suddenly in a different world. Here, too, Sørensen has taken the deep-sounding sliding chromatics of La Mattina and pitched them much higher up, matching the range of the solo instrument. And, as in Serenidad, he throws in some fast rhythmic passages that ameliorate the “decaying” sound that he favors. In the second movement, he creates an entirely new sound world in the middle, I know not how. This concerto, too, just sort of ends in the middle of nowhere.

In short, Sørensen is a composer who has created his own style but is not locked into a one-size-fits-all formula, and that makes all the difference in the world. Towards the end of the first movement of the Trumpet Concerto, for instance, he has the soloist insert a cup mute into his horn and even use “wah-wah” effects like a jazz musician, albeit in a non-jazz context. And no matter what we have heard so far in the first two works, very little of it is repeated in this concerto. Moods, yes, to a point, but neither the same orchestration nor the same sort of melodic-harmonic content. Each piece has its own feeling and character.

This is a wonderful album, highly recommended.