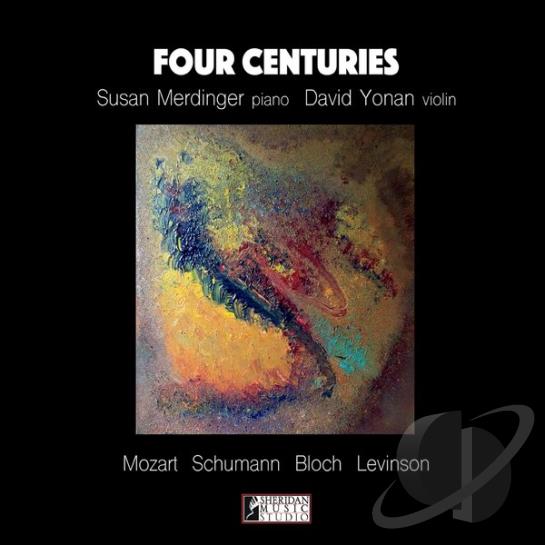 This CD by pianist Susan Merdinger consists of four duet pieces with violinist David Yonan, each one written in a different century, though to a certain extent this is misleading as Bloch piece is resolutely tonal. With that being said, it was like a breath of fresh air to hear a Mozart piano-violin sonata played on a real, modern piano and not one of those midget tack piano horrors from the 18th century as well as by a violinist who doesn’t use straight tone on every sustained note. The music is typically Mozartean, which means regular, sweet melodic lines with the occasional spurt of harmonic change or dissonance just to keep the cognoscenti listening, but it was delightful to hear when played by real masters of their instruments like these. There are so many delightful turns of phrase in this performance that I’d be spoiling the listening experience for you if I pointed them all out, but I will mention that Yonan uses a tasteful and judicious amount of portamento which helps the music immensely. In addition, Merdinger’s touch and musical style continually holds one’s interest. Oh, how I wish she could record the complete Mozart Piano Concerti with someone like Adám Fischer or Stefan Mai conducting!

Needless to say, a work like the Schumann sonata is perfect for artists of this skill level, and they give it all they have. Seldom have I heard music-making by a modern-day violin-piano duo on this high a level; I think the last time was in the Barbara Govatos-Marcantonio Barone recording of the Beethoven Violin Sonatas on Bridge. Every note, phrase and accent falls perfectly into place like diamonds on a tiara, and their emotional commitment to the music runs deep.

Bloch was, for me, one of those composers whose work was almost on the cusp of modernism for its time. He lived until 1959 but, being born in 1880, his aesthetic was that of the pre-Stravinsky and Bartók revolution. Like its cello counterpart, the “Rhapsody Hebraïque” Schelomo, Bloch’s Suite Hebraïque is an excellent piece, well constructed and interesting. The principal difference is that it is in three movements, and I was particularly taken by the second, titled “Processional.” Here, again, Merdinger and Yonan give it everything they’ve got, producing a performance of searing intensity.

I found Levinson’s Early Crossing more interesting than the Shtetl Scenes on Merdinger’s other CD (see previous review). Here, he plays with harmony in a way that moves it in and out of tonality while still circling the wagons around it, so to speak, and this teasing of the ear with the harmony is, for me, very interesting. This piece was dedicated to Yonan, who plays it with great feeling. At one point around the 3:44 mark, Levinson has the violinist play on the edge of his strings to produce a weird effect, but by and large this is not an “effects” piece as too much modern music is nowadays. In addition, Levinson’s melodic lines here are more interesting, original and less predictable. I enjoyed this piece very much.

The end result is a very satisfying recital in which both pianist and violinist prove that if you are an intelligent and emotionally committed artist, you can make virtually anything sound great. I give it five fish!