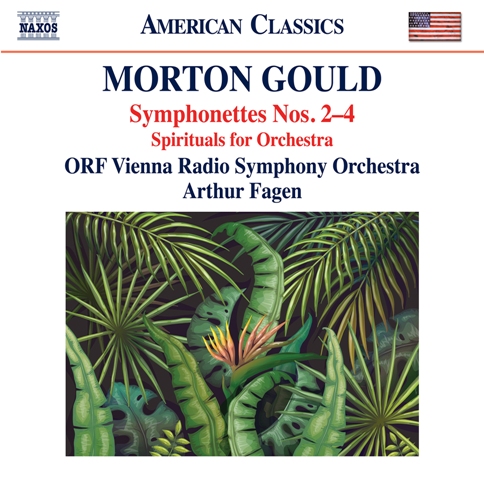 As I mentioned in an earlier review, Morton Gould was a much better composer than he is often remembered as being, not only in his late Stringmusic but also in his Piano Concerto and other works, but of course he also, like Aaron Copland, had his populist side. These pieces are in that style, but I enjoy them nonetheless because Gould was one of those American composers who had a real appreciation for and understanding of jazz, which he incorporated into this music.

Interestingly, the Symphonettes Nos. 2-4 are presented on this disc in their opposite order, starting with the fourth and working back towards the second, and the fourth is his Latin-American Symphonette. As a conductor, Fagen conducts in a light, airy style with little emotional involvement in the music. It is crisp, clean and professional but sadly lacks bite, and it was clear to me from the opening “Rhumba” of this Symphonette that his approach is to ride on the surface of the music.

Of course, this isn’t bad in itself, particularly in music that was designed to entertain, and entertain it certainly does. But you think back to the way Michael Tilson Thomas, Bernstein and even such foreign conductors as Munch, Doráti, Abravanel and even Toscanini performed American music, and you feel a little cheated. Indeed, Abravanel’s performance of this Symphonette No. 4 is a barn-burner compared to Fagen’s.

Nonetheless, if you prefer your light music to sound light, with no edginess or drive, this recording will surely satisfy you. Fagan at least gets the rhythms right, which is a good thing, and the ORF Vienna Symphony plays them with expert technique and, in this case, very good, clean sound from Naxos.

Gould has a lot more jazz influence in the Third and Second Symphonettes, but here the Austrian musicians approach the music with less sureness of style and syncopation. They play it about as well as most classically-trained foreigners do, but not quite with the sure swagger of their American counterparts. But, again, it’s not a bad performance, only a pretty good one instead of a great one. The Second Symphonette begins with a bit more pep in its step; this is the most successful of them; but the famous “Pavanne” (orchestrated and recorded, after Gould introduced it, by Glenn Miller and his Orchestra) is a shade too slow.

Fagen and his orchestra do not play the Spirituals with quite the zest that Gould himself did with the Chicago Symphony Orchestra, but again, they’re OK performances.

So there you go. OK performances of music that, although not Gould’s best, has much charm, humor and zest in it.