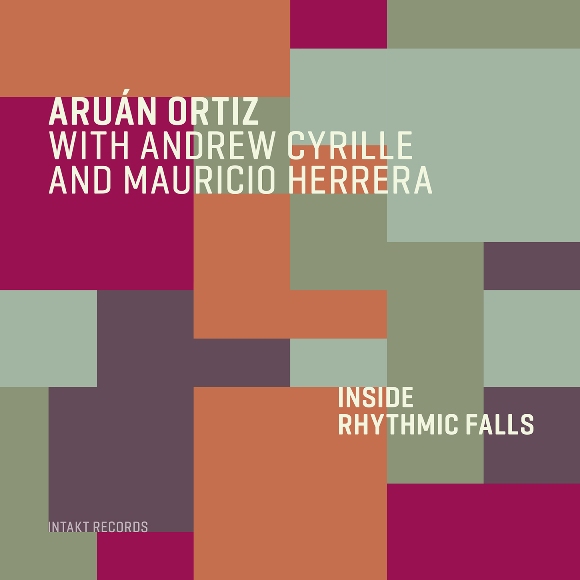 This CD represents a different kind of project for him. According to the publicity sheet:

Aruan Ortiz has long dreamt of making an album that would evoke “a cascade of rhythms going over me, almost dragging me to fall.” This feeling of being overtaken by rhythm is one he knows well, having spent his first 23 years in Cuba. Born in 1973, Ortiz grew up Santiago de Cuba – the cradle of Afro-Cuban music and a veritable “vortex of rhythm”. Ortiz captures the symphony of everyday life in Oriente on his arresting new album, Inside Rhythmic Falls. “I think of myself as a storyteller,” Ortiz says, “and each of the album’s ten tracks tells a story about Oriente province.”

An unknown pair of voices, the first of which sounds female, speak in a foreign language for a minute or so, the only English words being “from the Kingdom of Congo” while Cuban percussion played by Herrera is heard in the background. Later on, we hear the words “in the center of Yanga” or “Unganga” (I couldn’t quite make it out). Ortiz himself doesn’t play on this track, but he opens Conversations With the Oaks in a strongly percussive manner, moving into a right-hand solo comprised of single notes and crushed chords, very abstract in feeling, accompanied by Cyrille on drums. This is a very different Arúan Ortiz, a more diffuse, “outside” jazz player who avoids a set form in favor of very abstract meanderings. Here, he sounds very close to Matthew Shipp in both style and feeling. I half-expected to hear Ivo Perelman coming in to join him. In short, the music, though fascinating and creative, is quite difficult for the average untrained ear to follow, and it doesn’t help that Ortiz stays essentially in one chord space for the majority of the track.

Marimbula’s Mood opens with Cuban percussion, played mostly softly, as Ortiz sprinkles notes over the top. I’m not sure if I agreed with him, however, that the “cascades of rhythms” were “almost dragging me down”; to my ears it seemed, rather, that he was able to stay above them, creating his own soundspace while they played behind him. I say this because, for the most part, the rhythms in his own playing are discrete from those played by the drums and percussion. It sounds to me as if Ortiz is commenting on the percussion effects rather than being dragged down by them.

Despite the presence of such strong rhythmic playing, in fact, the mood of this album, and Ortiz’ own playing, leans more towards the cool side of modern outside jazz and not towards the hotter aspects of it. This is not meant as a criticism, however, but merely to define it a little clearer. In Golden Voice, it sounded to me as if he were playing his piano part around the edges of the percussion figures, adding a little “gingerbread” to the structure they were creating. Towards the end of this track, however, Ortiz matches up his rhythm with that of Cyrille.

By contrast to all this, De Cantos y Ñáñigos is a slow, soft piece that opens with Ortiz playing a relatively tonal chord sequence around which Cyrille plays his drums with brushes, very softly and creating an asymmetric pattern that Ortiz generally ignores. In fact, if anything, the basic pulse or tempo continues to slow down as the piece progresses; here, I did feel that the work of the drummer was “dragging him down.” A very strange piece, indeed!

Finally, by track 6, we reach part 1 of Inside Rhythmic Falls, and here both of our percussion players have a field day, banging away on their instruments in happy counterpoint, but that’s all it is, two minutes and 41 seconds of percussion. In Sacred Codes, Cyrille is the only drummer while Ortiz plays a series of single notes and chords that appear to be rather random. Rhythmic Falls 2 opens with an ominous-sounding bass note pattern played by Ortiz, over which Cyrille overlays his asymmetric drumming. The pianist’s rhythm, however, becomes gradually faster and more insistent, to the point where he is clearly fighting against the drums. The remaining tracks are built along similar lines.

Although Inside Rhythmic Falls is an interesting experiment, I found it somewhat uneven in both concept and execution yet nonetheless fascinating. Well worth a listen.