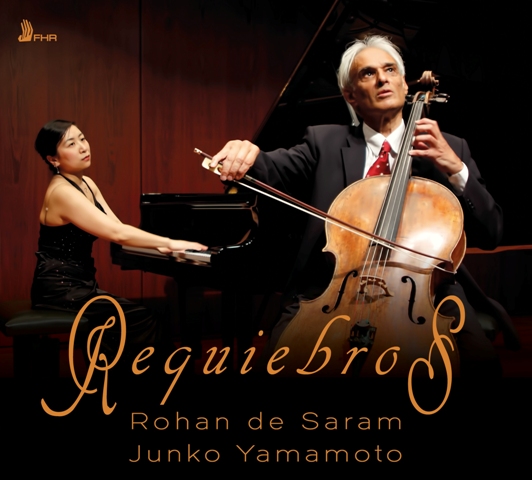 This CD, scheduled for release in April, is the latest in cellist Rohan de Saram’s large body of work on records. The intrepid cellist, noted for his promotion of modern music, here takes a step back to play several established classics by older composers, including such chestnuts as Saint-Saëns’ The Swan, Ravel’s Pièce en forme de Habanera, Fauré’s Après un rêve and de Falla’s Seven Popular Spanish Songs while including first recordings of works by Oliver Sascha Frick and Toshio Hosokawa. (On his Wikipedia biography, it says, I think with a great deal of irony considering the staid tastes of most listeners, that “Until his thirties he made his name as a classical artist, but has since become renowned for his involvement in and advocacy of contemporary music (bold print mine),”  the implication being that contemporary classical music IS NOT CLASSICAL!)

In this program, he is partnered by Junko Yamamoto, a superb pianist who is on his wavelength from start to finish. Her lyrical yet exciting keyboard approach spurs the now-aged de Saram to some of his most exciting playing in all of these works. That is the good news. The bad is that, for reasons known only to themselves, First Hand Records has recorded these two great artists in a booming sea of reverberation, which undercuts the immediacy of their playing and in fact thins out de Saram’s usually full, beautiful tone. He almost sounds as if he is playing in an empty gym locker room. If you have an audio editor, I recommend copying a small sample of the reverb, reducing its volume by about 11 db, and then filtering the recording so that most of it is removed before burning the files to a CD-R.

But what fiery performances these are! As much as I’ve admired de Saram in the past, he is absolutely on fire in these works, most of which are based on Latin rhythms and/or themes. He digs into this music with the passion of a man to the manner born despite the fact that he is a British-born Sri Lankan by heritage. His deep feeling and legato playing in “Nana” from the Seven Popular Spanish Songs is absolutely exquisite.

Frick’s Chasse au moment, according to the notes, was inspired by “Yukihiro Taguchi’s short film Moment – performatives Spazieren, a room’s wooden floorboards journey through a summery Berlin,” whatever on earth that means. The music is in your now-patented edgy modern sound, with the cellist playing atonal eighth-note figures on the edge of his strings with his bow while the pianist limps behind him a fraction off the beat. It’s an interesting piece and doesn’t overstay its welcome, but hey folks…why are so many of you modern composers locked into the exact same style of writing? Have you gotten marching orders from the Boss Composer or something? I did, however, like the slower, slightly syncopated figures the cello played in the middle of the piece, and overall it works pretty well without really fitting into this program (it seemed to me an odd fit between de Falla’s and Ravel’s Spanish-themed pieces).

Hosokawa’s Lied III, also modern, is a slow, brooding work that requires great breadth of phrasing from the cellist, which de Saram provides. The composer says in the notes that although his music stems from an aesthetic quite different from Western classical music, he has always been drawn to Schubert’s songs and so tried to channel a bit of Schubert in this piece. I will say this: unlike Frick’s work, Hosokawa’s is unconventional in form and emotionally quite moving, and I liked it very much despite his tendency here to work with one particular drone note most of the time, only moving into other notes when the cellist’s line becomes more agitated. Nor do the effects he calls for—pizzicato and spiccato playing—sound contrived, but rather part of the overall design of the piece. In short, I really liked it very much. The ending fades away into nothingness.

After excellent performances of Après un rêve and The Swan, we get the not-as-well-known Fünf Stücke in Volkston by Robert Schumann, written the year before his famous Cello Concerto. The first of these is very rhythmic, with a nice swagger about it, using a brief but catchy theme in the minor. The fourth piece, in the major, is also lively and energetic with a secondary theme in the minor that veers back to major, while the fifth—also in a minor key—is highly dramatic, veering sharply away from the mood of the others. The program ends with Saint-Saëns’ lively Allegro appassionata.

Except for the two modern works and the odd Schumann suite, this CD is almost “De Saran Plays Cello Favorites,” but he does such a great job on them that you thoroughly enjoy the ride.