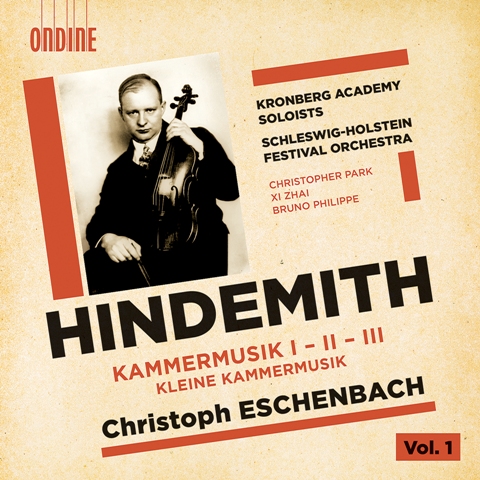 This is the first volume in a projected series of CDs covering the chamber works of Paul Hindemith. The Kammermusik has received several recordings in the past, including one by, of all people, Dietrich Fischer-Dieskau conducting the Ensemble VARIANTI on Hänssler Klassik, but it’s nice to have new ones.

It’s funny how perspective can change your view of certain music. Hindemith has always been considered a rather knotty composer, but after listening to an hour-plus of Luciano Berio, Hindemith sounds like Poulenc—particularly in the lively style that Eschenbach uses in these performances. Everything is crystal-clear in texture, but what sets these performances apart from the average run is their joie-de-vivre. Eschenbach clearly loves this music, and he wants to convey that love to you, the listener. The result is a series of almost infectious readings in which a good time is had by all. In his hands, these small-orchestra pieces by Hindemith almost seem like a modernist equivalent to Mozart’s Eine Kleine Nachtmusik.

In the slow movements of these works, Eschenbach conducts in a smooth style, almost “floating” the music, but not with any noticeable tempo modifications. This does not harm the music any, but provides an effective contrast to the livelier sections.

One thing is quite clear, however, and that is that, since modern musicians are far more comfortable playing harmonically complex music than their forebears, they are able to play such composers as Hindemith with far greater fluency. In his time, only Hindemith’s own Amar Trio and Quartet was able to really engage with this music in a way that was pleasurable to the ear; most performances of his music sounded leaden and uncomfortable. A perfect example is his Horn Concerto, which sounded lumpy and dull even in the hands of such a paragon of musical art as the late Dennis Brain, but sounds quite lively when played by Marie Luise Neunecker. The reason? Neunecker grew up in an era where modern music was all around her whereas Brain did not—even with Paul Hindemith as conductor—and in fact didn’t even like the piece.

This disc, then, is delightful throughout. I can’t wait to hear the next release in this series!