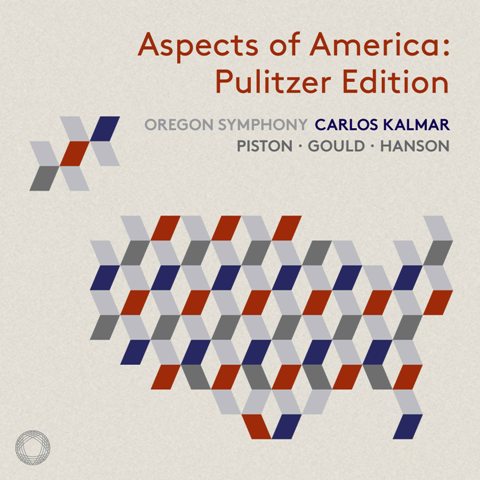 Uruguayan conductor Carlos Kalmar, current director of the Oregon Symphony, presents here three compositions by American composers that won Pulitzer Prizes. There are two ironies to this: first, that all three of these compositions, prize-winners and excellent, are strangers in American concert halls, and second, that it took a Uruguayan conductor to resuscitate the names of three American composers who were once quite famous and to a certain extent popular, but whose value has dropped significantly in the last 30 years. Up to the 1970s, all three—along with William Schuman, who has similarly sunk beneath the waves—were familiar figures in American concert life, but nowadays they are scarcely remembered.

Of course, when I say “scarcely remembered,” there is a caveat. Each of them wrote a very popular piece that has more or less retained some currency (Piston The Incredible Flutist, Gould the Pavane and Boogie Woogie Etude, and Hanson his Merry Mount Suite), but none of the three are big names in contemporary American concert halls. But of course I’m very glad that these works have been re-recorded.

As a conductor, Kalmar employs a straightforward style alternating sharply-etched playing in the brisk, harmonically edgy passages with soft, mushy romantic style in the lyrical ones. I have a bit of a problem with this as I think it is the musical equivalent of mixed metaphors, so to speak, and my internal system bristles against warm mushiness in any performance of any music. Moreover, despite his surface excitement in the faster passages, I never got the feeling that Kalmar was playing the music “from the gut,” but rather riding on its surface. This does not mean that the performances are bad, only that they are not quite as good as those by conductors who get rather deeper below the music’s surface. This approach is especially damaging in the case of the slow second movement, which emerges as a soft ear pillow and nothing more except for the brief brass outburst at the 7:09 mark. Predictably, the almost consistently fast third movement comes off the best, but in this Symphony, I preferred Jorge Mester’s recording with the Louisville Symphony Orchestra.

On the other hand, Kalmar’s performance of Morton Gould’s Stringmusic is tighter and more energetic than the one by David Alan Miller and the Albany Symphony Orchestra, which is the only other commercial recording of it I know. Except for the first and last movements, which Kalmar plays a few seconds longer, all of the tempi here are brisker, particularly the third-movement “Dirge” which Miller drags out a minutes longer. As for the music itself, I am not ready to proclaim it the greatest piece of music for a string orchestra written in the 20th century, as some critics have done, but it is certainly a good piece. There’s quite a lot going on under the surface here, and except for a few mushy-romantic moments Kalmar conducts this with considerable brio and a good understanding of the work’s structure. Happily, Kalmar does not overdo the romanticism in the “Dirge,” as Miller did. This, then, is a masterful performance and definitely a “keeper.”

Surprisingly, Kalmar does get under the skin of Howard Hanson’s Fourth Symphony, to such an extent in fact that it almost sounded, to me, like a composer-conducted performance…in fact, not too dissimilar from Hanson’s own recording of this symphony on the Mercury label, though Hanson himself gave a bit more “bite” to the music. I especially liked the way Kalmar played the rapid third movement.

A bit of a mixed bag, then. The performance of the Piston Symphony is so-so, the Hanson quite good and the Gould splendid. The sonics are excellent, by the way: lustrous and clear, with only a bit of natural reverb around the orchestra.