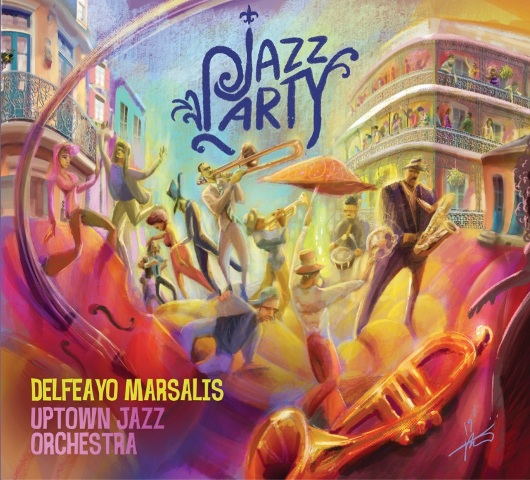 Ever since I bought my first Delfeayo Marsalis album back in the 1990s—it was on the RCA Novus label, a label that no longer exists as an independent company—I found myself drawn to his wonderful trombone style and his commitment to a more modern style of jazz than that of his older brother, Wynton.

This album is a departure for him, a program of what he terms “happy jazz.” He explains it this way:

I stopped at a local restaurant whilst wearing an Elvin Jones Jazz Machine t-shirt. An elderly gentleman approached me, inquiring excitedly, “Do you play jazz? I love jazz! What type of jazz do you play?” My response was simply, “Modern jazz.” Somewhere between disappointment and deflation came the muted admission, “Oh, I don’t like modern jazz. I only like happy jazz!” I pondered this statement for a while, then concluded that the traditional New Orleans and swing era songs were mostly in major keys and the prominent players interpreted them with a great deal of optimism.

But as one also steeped in the blues and the modern New Orleans beat, which in general means an R&B or Professor Longhair style, Delfeayo’s concept of “happy jazz” is not really the Swing Era style, as much as he may like it himself. It’s sort of a modified version of the Dirty Dozen Brass Band, the New Orleans aggregation that took the city, and the country, by storm back in the late 1980s and early ‘90s with an orchestrated funk-New Orleans beat. With that being said, Marsalis has made an effort here to keep his big-band arrangements neat and clean. A bit of funk is here, both in the ensemble and solo passages, but it’s not too overwhelming or overly complex. It is, as advertised, “happy jazz,” albeit happy jazz with some modern twists. A good example is Trevarri Huff-Boone’s baritone sax solo in Blackbird Special, which goes a bit more “outside” than, say, the “happy jazz” of the 1940s and ‘50s played by such groups as Sharkey Bonano and his Sharks of Rhythm or by Al Hirt in the ‘60s. And the beat in this track is indeed quite close to the kind of things the DDBB was doing in the early ‘90s.

7th Ward Boogaloo is one of the most Latin-sounding pieces on the album, with Delfeayo playing the opening melody on his trombone. Yet oddly, the leader doesn’t get many solos in this program; he turns most of them over to his talented sidemen, on this track tenor saxist Roderick Paulin before he himself does indeed return to play a solo of his own—at which point the beat is converted from a Latin beat to a straightahead swing. His tone and technique, including some nifty triple-tonguing, is as impeccable as always. I also liked the intricate sax section writing following his solo.

The opening tune of Raid on the Mingus House Party sounds for all the world like the Spider Man theme, scored in a Charles Mingus style. We then move into a different melody played by the saxes, and the band does indeed do a good job of sounding like a Mingus aggregation. Gregory Agid plays an interesting and, at times, gritty-sounding clarinet solo, followed by a chase chorus between Khari Allen Lee on alto and Scott Johnson on tenor, again with shades of Mingus’ own soloists with their emotional cries. This is the only track on the album on which Ryan Hanseler plays piano, and he makes the most of it in a good if not exceptional solo.

The only soloist on Mboya’s Midnight Cocktail is speaker Karen Livers in a pretty dumb, overtly sexual monologue. I could have lived without this one. So New Orleans returns us to a Professor Longhair/DDBB kind of groove, with trumpeter Bryce Miller doing the speaking. Again, it’s not particularly interesting. Dr. Hardgroove slows down the funk but keeps it present, thankfully without a superfluous narration. The tune isn’t particularly good or memorable, but there are nice solos here by Khari Allen Lee and Andrew Baham.

In Let Your Mind Be Free we finally return to some interesting jazz. The opening melody, played by trombonist T.J. Norris, reminds me of another tune but I just can’t put my finger on the title. Clarinetist Agid plays some counterpoint before the whole band enters and again changes the melodic line. The band sings the vocal on this one and we hear solos from Paulin, Norris and lead trumpeter Scott Frock. Irish Whiskey Blues again gives the leader a chance to shine, and this is a real swinger, somewhat in the Count Basie mold but with a New Orleans accent. This is a real showcase for the leader’s trombone, also including two choruses by saxist Scott Johnson.

The real closer on this CD is Caribbean Second Line, another funk/R&B-type tune. Some of the sax scoring in this one is pretty interesting, and we hear solos from soprano saxist Khari Lee, alto saxist Amari Ansari, and the band’s other three trombonists, Terrance Taplin, T.J. Norris and Christopher Butcher. We end with an instrumental version of Mboya’s Midnight Cocktail which I greatly preferred to the original.

A mixed bag, then; tracks 5-7 are kind of a waste of space, but the rest of it is quite good.