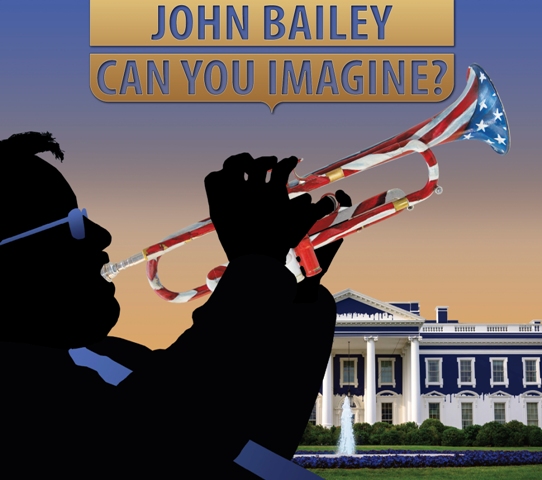 For whatever reason, many jazz musicians today seem to be politicizing their CD releases. This one is less offensive to me than most, so I decided to review it. The backstory of this album is Dizzy Gillespie’s run for President in 1964. It was, like so many things Dizzy did, a quixotic, half-in-jest campaign (Duke Ellington was to be Secretary of State, Louis Armstrong Secretary of Agriculture and Miles Davis CIA Director!!!), but, as the liner notes tell us, it had a serious side. Gillespie was trying to bring the country’s attention to “human rights, education, disarmament and human dignity.”

This was a true picture of America in 1964. We were deeply embroiled in a moronic war with Vietnam, run by one of the educated power elites (Robert McNamara) who was sending thousands of young men to the battlefield to be killed or maimed every year. America was still in the midst of its second and even more contentious battle for African-American and black Americans’ civil rights (black Americans being those people of color who had no African heritage). Martin Luther King was being spied on by J. Edgar Hoover’s FBI at the orders of the Kennedys. It was a pretty awful time. I know; I lived through it, and it wasn’t fun.

I also agree with the claim in the liner notes that “America in 2019 is as divided as at any time since the 1960s,” but dispute the claim that “Americans are now desperate for leadership that embodies the compassion and decency that used to define America.”

Name me this “leadership that embodies the compassion and decency that used to define America” other than Jimmy Carter or Ronald Reagan. Lyndon Johnson was a power-hungry megalomaniac who did nothing to diffuse dissention and allowed the FBI to continue spying on MLK. Richard Nixon was neurotic, paranoid and insecure. Bill Clinton, both of the Bushes, Obama and Trump acted/act as dictators in the White House, just with different personal styles. Donald Trump is arrogant by nature but, like Reagan and Carter, cares deeply about our republic (yes, folks…we don’t have a democracy, we have a constitutional republic. Look it up. They aren’t the same). What is different from the 1960s is that we now have a new Power Elite directing the narrative THEIR way and ONLY their way, and that is the corrupt and ideological media—a media that was only too happy to allow President Obama to censure and ban reporter Helen Thomas, a veteran of the compassionate, decent yesteryear (the first president she covered was JFK), from his White House press briefings because she didn’t march in lockstep with them. If you want to stop hatred and division in this country, go after the mainstream media. Ignore them. Crush them. Stop watching, listening to and reading their hatred, lies and distortions. If you do, you’ll be surprised how many people on “the other side” you can love, embrace, and have things in common with. As for “social justice,” we have it. People of color have NEVER been more respected, admired or accepted into the mainstream of society as they are today. I know. As I said earlier, I lived through the ‘50s and ‘60s. Pepperidge Farm remembers.

I have spoken. And that’s the last time I’m going to bring it up on this blog.

As for the music, Pebbles in the Pocket is a fast 6/8 tune that is played in the top line as if in 4. When Bailey hits his first high note, coming out of a theme statement with the sax, he is flying. No, he does not sound entirely like Dizzy Gillespie—Dizzy could fly around his horn with a speed that left most of his competitors in the dust—but he does incorporate some Dizzy-isms into his own aesthetic. Stacy Dillard is up next on tenor sax, flying around the horn with an almost manic feel and playing an absolutely magnificent couple of choruses. Stafford Hunter is also brilliant on trombone.

The President Gillespie Suite is divided into three sections, titled “The Humanitarian Candidate,” “Road to the Blues House” and “President Gillespie’s Birthday Song.” The music has a Latin feel to it, possibly reflecting Gillespie’s infatuation with Latin jazz dating back to the 1940s with his Afro-Cuban big band. The music develops interestingly through Hunter’s plunger-muted solo, later intertwining with the saxophone and, later still, mixing in with the leader’s trumpet until it sounds for all the world like a Charles Mingus composition—then, suddenly, around 7:05 we shift to a straightahead bop beat, with trumpet, trombone and tenor sax playing a different theme in unison before Dillard comes flying out with a great solo, followed by Bailey. They then engage in a chase chorus with Victor Lewis adding his two cents’ worth on drums. Bailey plays a nice coda to wrap it up.

The Touch of Her Vibe, written by drummer Lewis, also has a quasi-Latin beat but moves at a slower pace with the music in the minor to start with, giving it a somewhat more ominous sound. At 1:18 the beat changes somewhat as we shift to the major, and the meter sounds asymmetric to me. At 2:47 the tempo becomes more upbeat, the theme changes, and Bailey plays a nice flugelhorn solo. The music continues to morph as Dillard and Hunter engage in the fray. The Blues House harks back to an early-‘60s, Blue Note kind of style, with that medium-tempo feel and funky beat. (I could just imagine Alfred Lion dancing around the studio with a grin on his face as it was being recorded.) Hunter has a really nice, Jimmy Knepper-ish solo for two choruses, followed by the leader playing a nice, relaxed style, a little reminiscent of Lee Morgan. Bassist Mike Kam also has a very nice chorus on this one just before the ride-out chorus.

Ballad From Oro also has a Latin feel, more like a samba than a bossa nova, and here Bailey shows off his outstanding breath control by playing half of his first chorus in one breath (or, perhaps, using circular breathing as Rafael Mendez used to do). At 1:47 the tempo suddenly doubles, then at 2:28 falls back to more of a ballad pace as we finally get to hear a piano solo, pleasant but undistinguished, by Edsel Gomez. Bailey returns to dominate the second half of this tune with occasional commentary from Dillard and Hunter.

Dillard’s own composition, Elite State of Mind, follows, a nice jazz waltz which features flautist Janet Axelrod playing the theme, with Dillard joining in on the breaks, then both Dillard and Bailey in the second chorus. Hunter then also joins the ensemble and later plays a subtle but very tasteful solo. Although all of the soloists play well here, it is only pianist Gomez who I felt was really comfortable enough with the 3/4 beat to play a really imaginative solo.

Francis Hime’s Valsa Rancho is mostly, but not entirely, a ballad dominated by the lush but musically uninteresting playing of Axelerod’s alto flute, although later the tempo picks up and Dillard plays a very fine solo, here on soprano sax (and he has a good tone on the instrument, too). Lewis’ drums also add to the excitement as he kicks up a ruckus behind Dillard before we suddenly return to Axelrod for the finale. Happily, we get a somewhat uptempo number next in Lewis’ From the Heart, mostly ensemble in the early going until Dillard bursts in with another fine tenor solo. Bailey plays a nice trumpet solo, more emotionally dramatic than musically creative but with his usual excellent tone and technique, and Gomez adds a pretty good piano solo. Hunter also plays very well in spot solos during the ride-out.

Sadly, the album concludes with People, a piece of dreck that I’ve always detested (and, as far as I can remember, very few jazz musicians ever tackled because it was a piece of dreck). Not even this talented band can make much out of it, but here it is for those who like it.