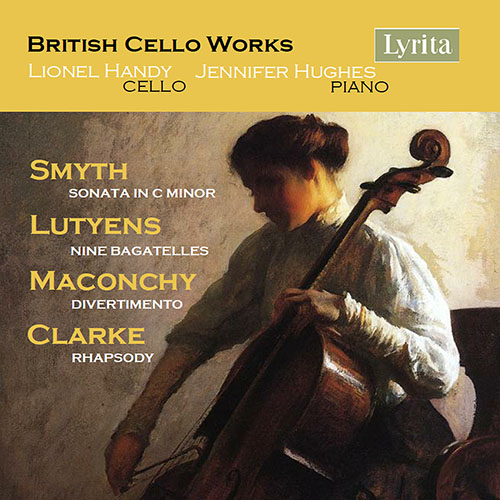 In this interesting set, British cellist Lionel Handy plays not only cello works by British composers but, more specifically, British women composers, of whom the only well-known ones are Ethel Smyth and Rebecca Clarke.

Yet although Smyth’s name may be known, her music always seems to be going in and out of fashion every 30 years or more, since the last recording of this cello sonata I can trace was made by Friedemann Kupsa on the old Trouba-Disc label about 1986. The music remains as excellent as ever, lying in style somewhere between Brahms and Tchaikovsky (her two idols of the 1880s, though she only met Brahms in person), yet with a manner of development and sense of passion entirely her own. When shown one of her chamber works (not this one) by his friend Heinrich von Herzogenberg, Brahms refused to believe that it was written by a woman, since his only experience in “women’s music” was in much more sentimental works, and although Smyth’s music was emotional it was NEVER sentimental. Indeed, I’d pit the development section of the first movement against anything Brahms himself wrote around this same period. I think I like Handy’s performance even better than Kupsa’s, though his cello tone, at least on this recording, sounds a bit “buzzy” if you know what I mean. Interestingly, both the theme (played in the minor) and the rhythm of the last movement sound more Russian—evidently her Tchaikovsky influence.

Elizabeth Maconchy’s Divertimento, composed in 1941-43 for William Pleeth and Margaret Good, is often described as a “witty and offbeat,” using foreign dance rhythms to propel her unusual and sometimes tongue-in-cheek themes and development. Yet I don’t think she wrote this piece tongue-in-cheek; rather, I got the feeling that she simply enjoyed incorporating, for instance, a Latin rhythm into the first piece because it fit the character of what she was trying to do. By way of verifying what I just said, listen to the second movement, where the rhythm could be called “dance-like” if it stayed in a regular meter, but it does not. Both the meter and harmony move all over the place, and halfway into it the average listener will surely be lost. Interestingly, Maconchy seemed to play on this, putting pauses in the music as it reached the end as if to say, “OK, so you’re lost…here’s the way out of the maze!” The third movement, “The Clock,” plays in a similar manner with a different rhythm, and so on through the cycle. Very interesting music!

Elisabeth Luytens’ Bagatelles are also unusual pieces. One might almost call them ciphers—very short constructions, mostly bitonal, which play on a specific motif or rhythmic idea for very brief periods of time, ranging from 34 seconds to 1:19. Despite the fact that they are not in the 12-tone format, there’s something about their concentrated efficiency that reminded me of Webern, only not nearly as abrasive on the ears. Luytens was surely a composer who made every note count; indeed, some of these pieces seem to end in the middle of a statement, indicating to the listener that Luytens had said all she was going to say and had no intention of filling up space with folderol. For a female British composer writing in the mid-20th century, these are unusual and excellent pieces; even a few of them could be played in a concert, and listeners would get the point very well, I think.

We end with Rebecca Clarke’s Rhapsody, a post-Romantic romantic work that lasts nearly a half-hour. Much of the music here is comprised of typically pretty, lyrical themes, but Clarke throws in a few interesting harmonic twists and has the music rise to a climax every now and then to keep up listener interest. Nonetheless, it is not as structurally sound as Smyth’s sonata or the other works on this CD, although you are free to like it more than I did. Handy and Hughes certainly play it with a good deal of fervor and commitment. I should point out that although Clarke’s name is fairly well known, this is not one of her better-known works.

An interesting recital, then, with several ups and not many downs.