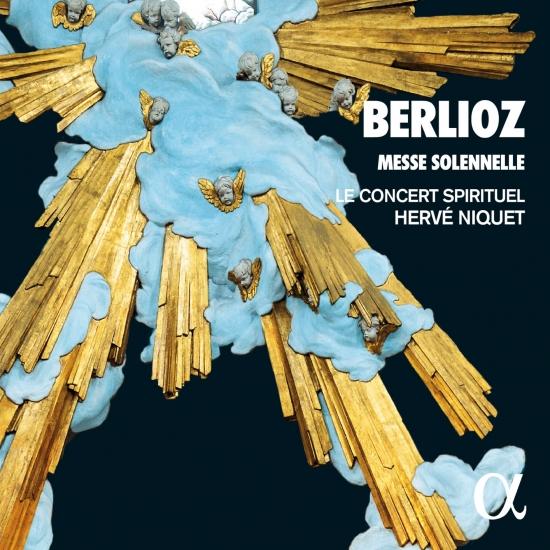 Up until now, there have been only two recordings of Berlioz’ early Messe Solennelle, the famous Philips issue conducted by John Eliot Gardiner (included in Warner Classics’ Berlioz: Complete Works set) and a version on Koch International with the Washington National Cathedral Choral Society conducted by J. Reilly Lewis.

Now we have a third, this new release led by early-music veteran Hervé Niquet, and I believe it is the finest performance of the three. Why? Sound. Berlioz’ music, particularly his religious music such as the Requiem and the Te Deum, was all about sound, the resonating of a choir and orchestra in a large space, creating an ambience that was meant to envelop and occasionally overwhelm the listener. The same principles apply to his Messe Solennelle, but Gardiner’s recording was somewhat thin-sounding in both the orchestra and chorus and Lewis’ performance was a bit boxy and constricted.

This new incarnation corrects all that. Recorded in June of this year at the Royal Chapel of the Château de Versailles, Niquet, his performers and recording producer Manuel Mohino have achieved the impossible. They have brought the entire, full-spectrum sound of the Royal Chapel into your living room, and with it, Berlioz’ music takes on an amplitude and richness that I would have deemed impossible prior to hearing this recording.

From the very first note of the Introduction, you are immediately transported out of your current time and space into another world. I can’t even adequately describe it; words fail me trying to convey the stupendous wholeness of it all. But let me try. First, there is the chorus, which sounds so rich and sings with so much heart that they immediately suck you in. And listen to the way their sound reverberates when they suddenly stop singing on a chord. Although Niquet uses those blighted straight-tone strings, they have a certain sheen here that both Gardiner and Lewis somehow failed to achieve. And then there are the tempi he chose for the various sections of the work. The fast passages are clearly faster than Gardiner: the Introduction has only three seconds shaved off it, but Niquet’s “Gratias” runs only 4:50 compared to Gardiner’s 6:42, his “Crucifixus” 1:41 compared to 2:33, and his “Agnus Dei” 3:21 compared to Gardiner’s 3:51. Yet none of them sound rushed or pressed, and by way of compensation he takes other sections slower that Gardiner, i.e., the “Kyrie” 7:39 compared to 6:49 and the “Resurrexit” comes in a few seconds longer. Soprano Adriana Gonzalez has an uneven flutter in her voice that I didn’t like, so Gardiner’s soloist (Donna Brown) is better, but both tenor Julien Behr and bass Andreas Wolf are as good if not better than Gardiner’s soloists (Jean-Luc Viala and Gilles Cachemille).

Yet in the end it’s that incredible sound that gets to you, the richness and 3-D quality that convinces you that this is the performance of the Messe Solennelle to beat. I also rush to point out that the sound quality is so realistic that, at one point in the “Crucifixus” when you hear the winds mix with the French horn after the male choristers sing the opening words, the blend is perfect yet you hear the instruments so clearly it’s as if they were playing in your living room. It’s simply uncanny. Although the brass outburst in the “Resurrexit” isn’t quite as much a “surround sound” experience as the famous moment in the Requiem when the four brass choirs come at you from the balconies, it’s impressive enough to make an impact. Small wonder that “High Res Audio” is featuring this album on its website. I still get a kick out of hearing snippets of the Symphonie Fantastique and Les Troyens, both future compositions, in this Mass, partly because Berlioz treated them quite differently from the way he did in those works-to-come.

If you’re a Berlioz-lover as I am, you need to get this album into your collection. There’s no two ways about it. This is both a great performance and a sonic blockbuster.