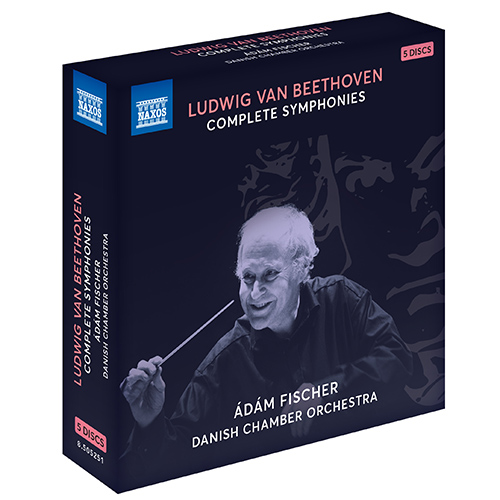 Almost simultaneously being released along with their massive, 90-CD set of the Beethoven “Complete Edition,” Naxos here presents Adám Fischer, clearly one of the busiest bees in the conducting hive, in a new set of that composer’s symphonies. With this release, Fischer becomes the only conductor to present complete boxed sets of the Mozart, Haydn, Beethoven and Mahler Symphonies. Since the Haydn set alone took him nearly a decade to complete, one can infer that he spends the greater part of his life in recording studios!

This set, scheduled for release later this month, comes fairly hard on the heels of the mind-blowing Philippe Jordan set that I recently reviewed. Like Jordan, Fischer uses a lean but modern-sounding orchestra without straight tone in the strings, but also with blistering tempi (very close to score) within each movement. But there are two differences: first, unlike Jordan who played the slow introductions to the first, second and fourth symphonies proportionately fast, Fischer takes them at their more traditional slower tempi, as did Toscanini in most of his performances. And secondly, Fischer is just a bit more prosaic in his use of rubato effects whereas Jordan, I thought, was remarkably creative in his use of rubato and rallentando.

There is another difference as well, and that is that the fast movements are not quite as zippy as in Jordan’s performances. Some of them, in fact, like the first movement of the first symphony, sounds so much like Toscanini’s recording that if one were listening to it played at a relatively low volume (so that you couldn’t tell if the sound quality was modern or old), one might very easily mistake it for Toscanini’s hi-fi NBC recording. Which is not a bad thing, thus if you don’t own the Toscanini recordings and have shied away from them because of the sound limitations, these would be fine substitutes.

Of course, there is one other element of Toscanini’s recordings missing here, and that is what I call an “undercurrent of energy.” Yes, the Danish Chamber Orchestra plays with good energy, and they are clearly suppler in their phrasing and pacing than David Zinman’s overrated cycle with the Tonhalle Orchestra, but there are several moments when you WILL notice that it’s not Toscanini conducting. Yes, there are some truly exciting moments in these performances, but it’s not a consistent feeling.

Having not heard it since I reviewed it in December 2016, I think I remember that Yondani Butt’s remarkably good Beethoven symphony cycle on Nimbus was very close to what Fischer does here. In fact, I just compared their performances of the First Symphony and found them remarkably close in both tempi and style—but yes, I do prefer the leaner sound and greater textural transparency of Fischer’s orchestra to the full London Symphony under Butt. It’s a marginal difference, but noticeable and important.

Fischer takes the first movement of the “Eroica” at Beethoven’s metronome marking of dotted half=60, and so far as I know he’s the only conductor to do so on records except for Hermann Scherchen back in the 1950s. This, I’ve always felt, was really a bit too fast; I much prefer Jordan’s slightly slower pace; but it’s what Beethoven gave us, and Fischer does introduce moments of rubato to modify the headlong rush forward. In the first movement of the Fourth Symphony, Fischer’s shift from the slow opening to the fast portion seemed to be a bit too abrupt; he doesn’t “prepare” the listener’s ear as well as Toscanini or Jordan did.

Indeed, as one progresses from this point on, one begins to notice some flaws in Fischer’s approach. Although taken at a Toscanini-like pace, I felt that the opening movement of the Fifth Symphony was just a little too choppy, but the tempi are fine. In the last movement, however, I felt as if either Fischer or the engineer over did the timpani, which keeps booming incessantly throughout. The “Scene by the brook” in the Sixth Symphony doesn’t flow, but stays rhythmically static, although the rest of the symphony is excellent.

In the Seventh Symphony, Fischer again resorts to some bizarre accents in the last movement, with a strong downbeat (accompanied by thundering whacks of the timpani) on the first and third beats of each bar throughout the opening section, which skews the feel of the rhythm. Near the end of the movement, he even increases the tempo in order for his strange drum whacks to make a more percussive effect on the listener’s ears.

Further, he continues this odd sense of phrasing into the first movement of the Eighth Symphony. Apparently, Fischer hears Italianate-style syncopations as an opportunity to un-syncopate them and increase the volume of his timpani. He similarly conducts the second movement with a choppy rhythm. Perhaps this has something to do with his being Hungarian, because Georg Solti had a similar problem with Italianate rhythms all through his conducting career.

The opening of the Ninth was, in my view, far too fast to be effective; he makes even Toscanini’s fastest tempo in this movement sound slow by comparison, and again he is chopping his rhythms and having his timpanist bang away. Yet he does play the syncopations properly in the second movement, and in the third, despite the very fast pace, he achieves a nice “floating” sound. The fourth movement started out pretty well, but good God almighty, what refuse heap did Fischer find these singers on?!?? “Baritone” Lars Møller has a raw, coarse tone and is all over the place in pitch during his florid opening phrases. Sara Swietlicki has a pretty timbre but also a “fly-away” vibrato that comes and goes (on her sustained notes, she sounds as if she is singing trills). And what the hell is a countertenor singing the mezzo line for? Don’t they have any mezzos or contraltos in Denmark anymore? Fischer’s penchant for chopping the rhythm returns in the choral passage just before the tenor solo, sung by one Ilker Arcayürek who has a cheap tone, poor breath support, and a flutter bordering on wobble. the late Robert Shaw wouldn’t even have hired this guy for one of his choruses. Oddly, Fischer conducts the fugue with a nice swagger, no chopping or parsing of the rhythm, and the chorus is pretty good, but with soloists like these, who needs enemies?

Thus, in the end, I came down to not wanting to recommend this set except as an outlier in style and execution overall. Back to Philippe Jordan, Gielen and Toscanini I go!