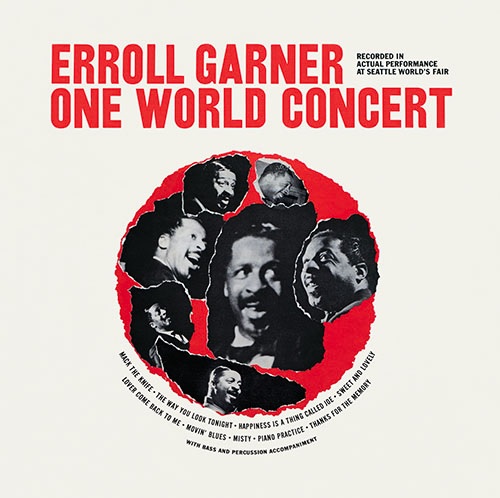 This was Garner’s first live album after his chart-topping Concert By the Sea. The digital reissue includes one track not on the original LP, a trio arrangement of Other Voices. The original LP was issued in America by Reprise Records, in Europe by Philips and Fontana.

There was never any real guarantee that a “live” set by Garner would be any better than his recordings; in fact, in my experience, Concert By the Sea was the exception rather than the rule, but although Garner always gave of himself even in the studio, there’s a bit of an extra kick to this album that is palpable. He attacked the keyboard with just a bit more joy. His grunts and groans are also clearer and more forward as he played.

Where this concert differs from the earlier one is in the quality of the improvisations. Although quite good, nothing on this disc is as surprising and inventive as the Concert By the Sea, but that doesn’t mean it’s inferior Garner. It’s just average. In the opener, for instance, I heard nothing quite as inventive as the superior tracks on Dreamstreet that I described in my review. In Happiness is a Thing Called Joe (one of the dumbest songs of the Swing Era; I absolutely hate it), he transforms it into a blues, which certainly improves it, without really moving into his more surrealist style.

But the audience eats it all up, and why not? Garner, even in “ordinary” mode, could make people smile and feel good when he played, which was his only goal. He does revert to his stabbing left hand against the melodic line of Sweet and Lovely, and on this one can actually hear Kelly Martin’s crisp cymbal work clearly accenting behind him. Garner occasionally transforms the bass line into a quasi-boogie beat, which also adds to the performance. This is clearly one of the real highlights of this set. He opens Mack the Knife with an interesting single-note, moving bass line that bears a slight resemblance to Beethoven’s “Moonlight” Sonata, thus temporarily fooling the listeners as to what his next number was going to be. I’ll say this much for Garner: by and large, he adhered to Jelly Roll Morton’s admonition to “always keep the melody going,” especially on his own tunes like Other Voices and Misty.

Garner uses another quasi-classical opening for Lover, Come Back to Me, and I appreciate the way he could turn even such a sappy ballad into a lively swinger. Yet another quasi-classical opening prefaces his own Misty, and of course the audience applauds as soon as they recognize the familiar melody. Garner throws one odd chord into it near the end of the first theme, a piquant choice. Immediately following this, he jumps into his uptempo romp, Movin’ Blues, with all the energy of a steamroller. The rhythm section sounds awfully good on this one, too. In one chorus, Garner alters the beat in his right hand to play triplet quarter notes against the solid 4 in the left.

Ponce’s Dancing Tambourine, though harmonically pretty straightforward, takes off like a rocket the way Garner plays it. By now thoroughly warmed up, Garner finishes the piece with a cute-corny ending, then launches into a somewhat Baroque rendition of Thanks for the Memory, only a little over a minute long, as his closer.

And just when he was getting warmed up, too!

The first half of this recital, though full of energy, won’t probably thrill you, but the second half surely will. Erroll Garner didn’t sound like any other pianist in jazz history, and no one has been able to duplicate his style since he died. He was one of a kind.