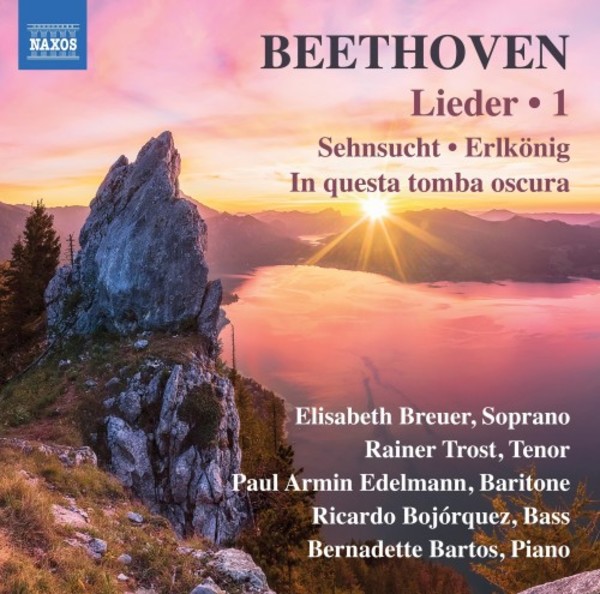 In preparation for the 250th anniversary of the death of Beethoven, several labels have been scrambling to release boxed sets, some complete and some merely a “best of,” to celebrate. Here is one of what appear to be several new issues by Naxos, another of which (to be reviewed soon) is Adám Fischer’s traversal of the Nine Symphonies.

This first volume of what will no doubt be a complete series of his songs focuses on his early output without opus numbers, the exception being the well-known “Freudvoll uns liedvoll” from Egmont. The album is split up among four different singers, but the lion’s share goes to tenor Rainer Trost and soprano Elisabeth Breuer, with baritone Paul Armin Edelmann in third place. Basso Ricardo Bojórquez gets but one song, probably the best-known of all of these early pieces, “In questa tomba oscura.”

What I found interesting about these songs is that, although Beethoven’s early piano music, chamber music and concerti sound much like Mozart, these songs clearly do not. He is already introducing major-minor changes into the harmony that Mozart would have avoided (I won’t say “didn’t think of,” because he was a musical genius, but probably avoided because they might have upset his not-too-sophisticated audiences). And then there is a song like Neue Liebe, neues Leben that sounds for all the world like Schubert (I dare you to play this as a blindfold test for your musical friends and ask them to name the composer…it sounds like a song left out of Die Schöne Müllerin). Perhaps not surprisingly, even the young Beethoven rose to the occasion for Erkönig, which sounds like an earlier version—again by Schubert, only less “regularly” melodic and more dramatic. It’s far more sophisticated than the much later version by Carl Loewe, as much as I admire many of Loewe’s ballads, and Edelmann sings the hell out of it. Bojórquez sings an incredibly subtle In questa tomba oscura, almost the equal of the kind of work that Alexander Kipnis could do in lieder, despite lisping in the letter “s.”

Elisabeth Breuer has one of those “pure”-toned voices of the old German school (think of Elfride Trötschel or Gundula Janowitz) that scarcely exist any more, but here she is. The three different settings of Sehnsucht are entirely different from each other, not just slightly different variants on the same melody. I’d like to put in a plug here, before I forget, for the fairly lively and sensitive playing of pianist Bernadette Bartos, who is excellent throughout this recital. Unlike Edelmann, who is the most famous singer here and is dependably excellent, Trost was unknown to me, yet I was really knocked out by his beautiful tone, vocal and breath control and interpretive skills. Please, let him not die young or ruin his voice! We need someone like this to take over from Peter Schreier as a great singer of lieder and light German roles! By contrast with Sehnsucht, the three versions of An die Geliebte sound like the same melody, reworked differently in rhythm and tempo, and with different piano accompaniments.

Freudvoll und liedvoll again changes the melody completely in the three different versions. Breuer does her level best here to interpret the lyrics but, although she is good, she’s not on the same high level as Trost or Edelmann. The second of these is the most famous setting, the one that even Lilli Lehmann recorded back in 1906, but the third version is also quite good—in fact, I think it’s more creative and dramatic than the famous second version. Breuer is also pretty lively in Das liebe Kätzchen.

Dimmi, ben mio, che m’ami, one of his rare songs in Italian, is sung beautifully by Trost. The two versions of Buβlied are packed into one performance, which includes the different version of bars 101-103; this is sung with excellent voice and interpretation by Edelmann. Oddly, the last piece on this disc, Languisco e moro, sounds like an unfinished song—it ends abruptly, in the middle of nowhere.

An outstanding disc of early Beethoven lieder, then, highly recommended!