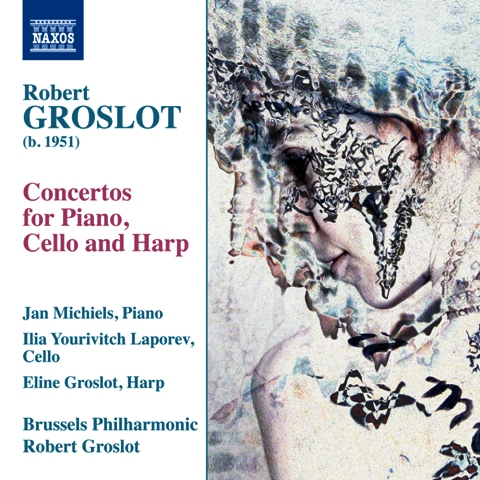 Robert Groslot (b. 1951) is a composer who has been around for several years, written concerti for many solo instruments as well as a Concerto for Orchestra, yet has managed to fly under the radar of most classical aficionados. Which is a shame because, from the first crashing chord of this Piano Concerto, I was drawn into the web of his music and held fascinated to the very end.

Although Groslot’s current music—all three of these concerti were composed in 2010-11—plays into the modern trend towards “edginess” in terms of fast, spiky themes played by high winds, brass and strings with timpani undercurrents, it is not aimless or underdeveloped music. On the contrary, I found him to be a modern equivalent of someone like Erwin Schulhoff, a composer who thinks things through and has a definite game plan in mind. From a strictly technical standpoint, his music develops in the traditional sense; it does not meander, nor does it depend on the juxtaposition of themes for its structure; but it continues to move and change, and is highly rhythmic. Like so many other modern composers, Groslot treats the solo instruments of his concerti as if they were an integral part of the orchestra. In the case of the cello and harp this would certainly be the case anyway, except that their roles are expanded here for the sake of preserving the concerto form. But the music each of these three instruments play is not a separate thread under and around which the orchestra performs, as in the case of the virtuoso solo concerti of the Romantic era. Rather, they take the form of the sinfonia concertante as did the concerti of Stravinsky.

And my guess is that Groslot admires Stravinsky even if the Russian was not a direct model for these works. The rhythmic vitality of the music is very Stravinskian, as are the changing meters. By and large, except for big climaxes Groslot uses his orchestra sparingly in most passages, just a section or two, sometimes just part of a section, giving the Piano Concerto the feeling of going in and out of a full orchestra-chamber orchestra setting. The liner notes indicate that Groslot uses in this work “a minor triad with a major triad one major second above (in the beginning: C minor and D major)” which reappear throughout the concerto both melodically and harmonically. At the 15:20 mark, the pianist does get a virtuoso cadenza that almost fits the “classic” concerto form. At the 18:35 mark, Groslot uses a repeated rhythmic motif played by the strings that takes a bow to minimalism, but not for long. A trumpet fanfare and timpani roll gets us back on track very quickly. At about 20:30 we enter the last phase of the concerto, and here the music moves at an almost frantic pace, with short, jarring orchestral chords that stab at the listener before trumpet fanfares lead into a Petrouchka-like swirl of high winds and strings. Yet even this section relents somewhat as the French horns enter, playing a chorded passages, followed by the trumpets which continually rise in pitch with the drums pounding behind them. This is quite a work!

Both the Cello and Harp Concerti are receiving their premiere performances on this CD. The former opens with a remarkably lyric and even lovely theme played by the solo instrument with light background accompaniment (mostly lower strings and trombones, but later on clarinet and oboe interjections) before the music takes off, once again, in a sinfonia concertante sort of way. This time, however, the music, though rapid and rhythmic, sounds almost playful and light-hearted, the last thing in the world you’d expect from a cello concerto. Quirky, atonal figures played by solo wind and brass instruments (flute, trumpet, bassoon, etc.) come and go behind the soloist who, probably because the instrument is one that is normally an integral part of the orchestra, really does dominate the concerto. Yet even here, as the music develops, one hears the soloist being used, you might say, as a “section” of the orchestra except that it is by itself, playing against the other sections. I also noticed that Groslot wisely did not write very much for the orchestral cellos. The liner notes, again, tell us that the development uses the notes D, F, Bb, C#, G# and D# which have an important effect on the further development of the work. Structures, melodic and harmonic, made up of a minor third, fourth and another minor third (thus a major triad in first inversion combined with its minor third in the upper voice) regularly occur, as do a series of perfect fifths.” This is what I call taking musical analysis to extremes. Yes, everything said here is true, but when I listen to music I’m really not as interested in the intervals used or how such they’re used as I am in the music’s linear progression and how it affects me emotionally and intellectually. I can certainly hear all the notes being played and appreciate Groslot’s ability to use them in such a clever pattern, but as the late Rafael Kubelik once said, music that is merely clever doesn’t interest me. It has to be emotionally affecting and cohesive in order for me to appreciate it. I’m the kind of person who’s more interested in what these building-blocks make than what the building-blocks are, if you know what I mean.

For instance, at 15:30 into this concerto, Groslot creates a polyphonic web of syncopated notes in which the solo cello is one component. I could take the time to analyze it structurally, but why should I when I like the way it plays against the preceding and succeeding music? That’s much more important to me. Anyone can throw intervals on a piece of score paper and hope that they make sense, but it takes a master to know how to use those intervals to create music. Towards the end of the piece, the cello plays some isolated three-note figures, again almost playfully, but this time a cappella. I suppose this is the instrument’s cadenza. Following, a series of jabbing, two-note motifs are played by the soloist and picked up by the orchestra, which develops them. This is what I mean about the music developing and going somewhere.

The Harp Concerto, played here by the composer’s daughter Eline Groslot, happily takes an entirely different approach to the instrument from the norm. Rather than have it play “angelic” music, it uses the instrument’s oddly ethereal sound to make it mysterious, even a bit edgy. Alberto Ginastera did something of the sort in his harp concerto, but made the soloist “shoot” the notes out as if they were being played by a Flamenco guitarist. By making the soloist’s music here rhythmic but quieter, Groslot has found a new way of writing for harp in a modern context that brings it more in line with the mood and rhythms of the Piano Concerto, except that here less timpani are used. Indeed, Groslot also tends to avoid the celli and basses in his orchestral writing here, emphasizing the upper-range instruments (including glockenspiel) to create a web of sound around the soloist.

Eventually, however, the pressed, rapid tempi dissipate, the mood becomes darker and more mysterious, and Groslot presents us with an eerie, Twilight Zone-like web of sound. Yet this, too, eventually accelerates as trumpets, winds, and timpani suddenly jar us out of our dream and into a rather harsh reality in which the harp soloist is merely window dressing for the feverish orchestral activity going on. Rapid little triplets figures played by the horns and flutes come and go, followed by sharp, stabbing figures by the brass, high strings and timpani. This, again, quiets down, leading into a particularly quiet, dark passages played by the soft strings—only for the concerto to stop on a dime and end!

As in the case of Groslot’s chamber music, which I reviewed earlier on this blog, this is an exceptional album of music by a modern master who deserves to be more widely known.