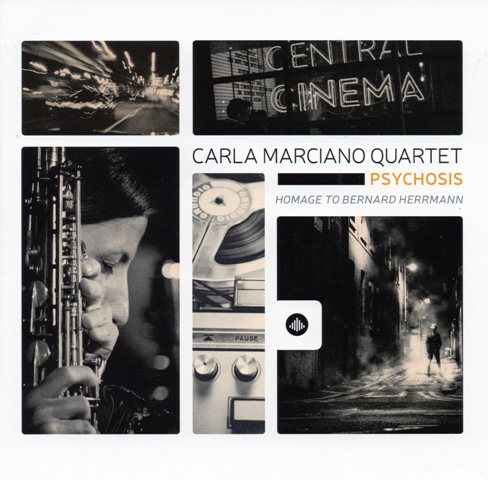 This album is saxist Carla Marciano’s “heartfelt homage to one of the greatest geniuses of film score, the composer and conductor Bernard Hermann, whose music has dazzled me since I was a child.” Since all of the films chosen here are psychological thrillers, she titled her album Psychosis. As a tag ending, we get a piece by John Williams for one of the Harry Potter films.

Not too surprisingly, the arrangements presented here are often slow and atmospheric, with her husband and pianist Alessandro La Corte playing the inside strings of his instrument at the outset of the Theme from “Taxi Driver.” Since the only one of these films I’ve ever seen, and saw it only once (once was enough), the only theme I kind of recognized was the one from Psycho. Essentially, these are free-form variations on each theme. Marciano is clearly a very fine alto saxist with a beautiful tone, although to my ears she plays just a bit “outside” the music when compared to a transcendent genius like Catherine Sikora. Nonetheless, she is very fine and the music produced here is certainly interesting. Only at the six-minute mark do we finally hear the drums, and then they are very heavy, playing a quasi-rock beat.

The Theme from “Marnie” starts with a much faster, more aggressive beat before moving into the typically 1960s-type tune that consists of the film theme—albeit with tempo and mood changes. I suppose that, within the framework of these arrangements, a certain stop-start feeling was inevitable, but personally I found it a bit precious and overdone. La Corte does, however, play a fine piano solo on this one, and Gaetano Fasano’s drums are very interesting. The pace quickens as Marciano plays very intense, almost Coltrane-like lines. On Theme from “Twisted Nerve,” Maricano switches to sopranino sax, playing fast. edgy lines, after which the bass pays its own sole above the drums with the piano chiming in with some sprinkled chords. La Corte is also very busy on this one though, when he plays, they mostly stick to just one chord. When Marciano enters, again on sopranino, she is all over the map, playing an equivalent of Coltrane’s “sheets of sound.”

The Theme from “Psycho” opens with a double-time, out-of-tempo solo by La Corte. The famous Psycho “scream” motif is then followed by Marciano and the trio playing a fairly rapid yet choppy theme which eventually swings. This is then developed in a choppy, angular manner before taking off again with a jazz beat. Fasano gets a rare drum solo in this one, too. We then get not one but two themes from Vertigo, titled “Prelude” and “Scene d’armour.” La Corte plays an electric piano on the first of these which creates a strange effect, and Aldo Vigorito plays an electrified bass. This then leads into the more melodic “Love scene” music. Marciano is particularly intense on this one, at the 7:15 mark quite clearly playing “sheets of sound” in emulation of Coltrane.

We close out this CD with John Williams’ theme from Harry Potter, apparently based on a popular series of children’s books about a wizard or some such thing. Overall, a very interesting CD in which Marciano & Co. play some very interesting variants on unusual material.