This unusual CD presents 11 spontaneous improvisations inspired by nine paintings by artist Daniela Chionna. One’s appreciation of the music, then, is somewhat dependent upon one’s knowing the artwork that inspired it, and fortunately the full-color booklet accompanying this CD includes most of the paintings that did so.

The one thing the booklet did not impart to me is who Daniela Chionna is. Looking online, I found nothing in English, only in Italian (which I do not read or speak), in which she is simply described as an “Artist designer.” Her paintings for this series, as you can judge from the cover artwork reproduced above, are all watercolors in soft dark blues, blacks and grays. The paintings are impressionistic and convey moods rather than concrete objects, even when one can discern a tree branch or something that looks like a flower in them.

In the opening selection, Giorgia Santoro appeared to be playing an alto flute very low in its register. Unlike much free jazz, however, she creates actual lines of music—melodic snippets but melodic just the same. When pianist Pat Battstone came in behind her, he too was playing somewhat tonal music. Both musicians seem to me to be strongly influenced by the French impressionist composers, but this is not a bad thing. Unlike most free jazz I have heard, this music has form and substance. It develops; it goes somewhere; and although the rhythm is not strongly accented, it is still felt.

This, in itself, is a great improvement over most free jazz, which has neither a direction nor form. I suppose that those who are most thrilled by free jazz hear something that I do not, but even in a “free jazz” setting, I want to hear music that has some semblance of order and meaning. In the second piece, Santoro sings into her flute in a way that produces a breathy resonance or “after-sound,” if you will. The music here is less melodic than the opener, and uses more glissando passages that are not so much atonal as microtonal. Battstone, whose piano is tuned regularly, contributes just a few light notes here and there, some of them produced by plucking the inside strings of his instrument. Santoro responds by making breathy sounds by blowing across the mouthpiece of her instrument. Then, suddenly, the music becomes more concrete and rhythmic, with Battstone playing a strong rhythm at the keyboard and Santoro following him with melodic-rhythmic ideas of her own. This is really wonderful music. This piece, The Forest Within, continues into the next track, which features Santoro playing a cappella flute in a manner reminiscent of some of Paul Horn’s meditation recordings, though even here she makes edgy sounds by blowing sharply across her mouthpiece, and when she does—adding some loud vocal “ah!”s here and there—Battstone comes in behind her, beating out a Middle Eastern sort of rhythm on his piano.

In Beyond the River Banks we move from Middle Eastern influences to those of Chinese flute music in Santoro’s playing and American jazz in Battstone’s; somehow, they mesh together.  But the jazz feel does not last long; Battstone moves in and out of it as Santoro switches from a conventional flute to a sopranino recorder, and now she, too, channels a bit of jazz feeling in her playing. This, too, is a wonderful piece of music which I thoroughly enjoyed.

With Attraverso i Rami, Santoro returns to a conventional flute but again plays it in a way that resembles Chinese flute music. This is rather appropriate since Chionna’s artwork has a quasi-Oriental feel to it. Battstone’s delicate traceries on the keyboard eventually expand into minor mode flourishes as the two musicians find common ground. And once again, the pianist tosses in a few jazz-like licks in which he doubles the tempo. Santoro plays a few comments of her own during the silences before they continue as a duo, playing almost an improvised double cadenza. 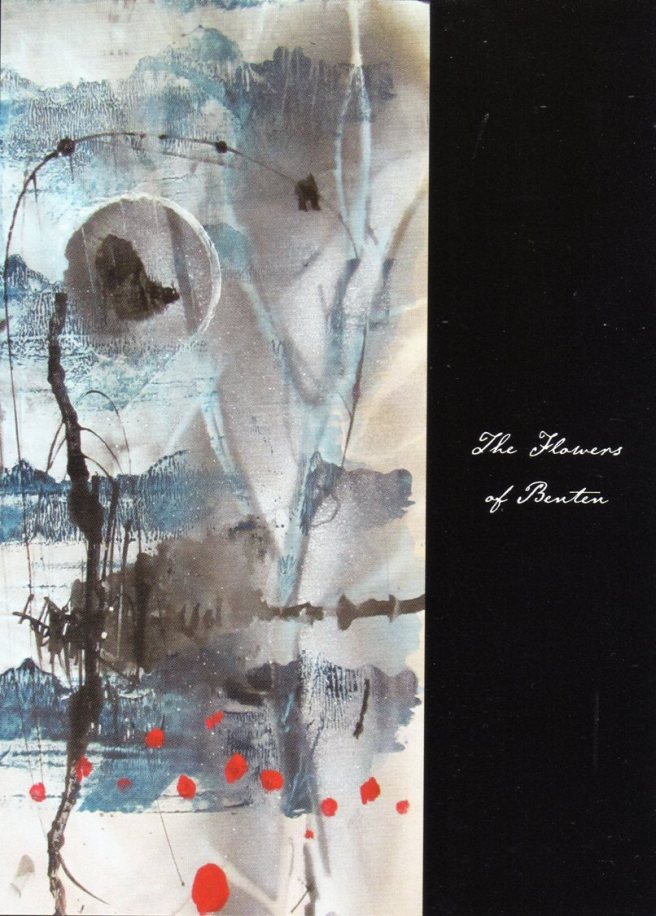 The Flowers of Benten features solo piano for the first minute before Santoro plays along with Battstone, sometimes following him and sometimes leading. And “play” is the operative word here; their music-making is very playful indeed as they enter into a medium brisk tempo and evidently have fun just creating music together. At the 4:10 mark, the music becomes even more animated as both flautist and pianist are clearly enjoying each other and responding positively to the call-and-response set up.

Much to my surprise, Part 1 of Window Into the Night begins with Santoro playing a Jew’s harp in a non-melodic fashion, following which Battstone plays edgy piano with paper stuck between the instrument’s strings to produce an eerie sound. Eventually Santoro sings an eerie, atonal melody while still playing the Jew’s harp, now also intoning a few notes. Quite amazing material. In Part 2, Battstone plays what I would characterize as a modified folk-rock beat on repeating piano chords while Santoro plays choppy, breathy notes on the flute, added to which she occasionally coughs. Battstone then takes off on a solo improvisation of his own, but after a while Santoro cannot hold back, thus she joins the fray as they play a nice little chase chorus.

In the opening of Blue/Ocean of Hearts, Battstone plays some of the richest music on the disc. It comes dangerously close to sounding like lounge jazz, but there is something about it—the continuous if slight forward push of the beat, the unusual melodic and harmonic structure—that keeps one from calling it so. At the 2:30 mark, he again tosses in some jazzy and bluesy licks, upping the tempo briefly as well as the volume level. Finally, around 3:12, Santoro comes in to join him, playing a melodic line in which she, too, tosses in some flatted thirds as the music becomes more animated.

The Mist of Morning Waters opens with ominous rumbles in the contrabass section of the piano, along with thumps on the instrument’s body, as Santoro blows soft, edgy notes across her mouthpiece. Then the pianist indulges in some actual free jazz, sprinkling notes up and down the middle and upper portion of the keyboard as Santoro jumps in to provide some lines of her owb, here also tossing in some soft, edgy notes here and there. We end with Song of Daphne, in which Santoro hums a strange melody very softly as Battstone plays some repeating, rambling figures. Eventually Santoro moves into her higher vocal register and sings wordless notes in a sort of Eastern-modal framework as the pianist plays a few slow right-hand tremolos to accompany her. Eventually Santoro switches to the alto flute, which she played in the opener, to bring the music on this disc full circle as the music ends in the middle of a phrase.

For me, this is one of the brightest stars in the entire Leo Record catalogue. I could listen to this CD endlessly and never grow tired of it. Two thumbs up!