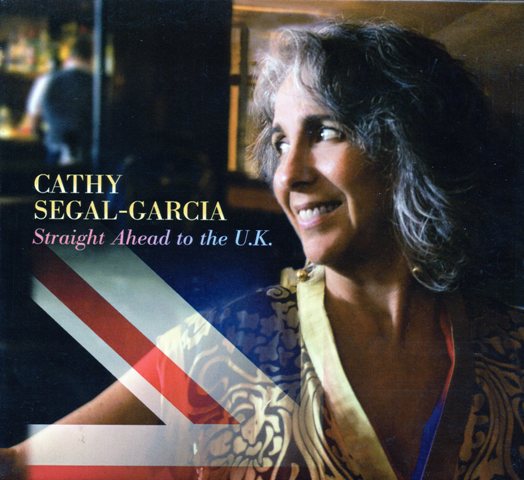 Now, here’s a record with a complicated history. Buckle your seat belts for this one, sports fans. It’s going to be a bumpy ride!

To begin, Cathy Garcia-Segal was born in 1953 and grew up in the Boston area, where her father played saxophone in local bands and her mother was a singer. Cathy studied flute, guitar and piano as a child and attended the Berklee College of Music from 1972 to 1975. In the latter year, she traveled to the U.K. to sing, and when there she dated alto saxist Andy MacIntosh, who came to the U.S. when Segal returned and played with Maynard Ferguson, Louie Bellson and others. But they broke up, MacIntosh returned to England, and they lost touch for many years until 2011, when he found her on Facebook, now as Segal-Garcia. Their friendship was rekindled, and they made this album.

For some reason, however, Segal-Garcia let the master tapes sit on a shelf and never released the album, and in 2013 MacIntosh died. That might have been the end of it, but Dan Davilla, a friend and executive producer, heard her talking about the album one day on a radio interview and encouraged her to “revisit” it. In doing so, she decided to do something different with the music. She brought in John Leftwich, a bass player, engineer, producer and arranger. Segal-Garcia also decided that she wanted to bring the vocals up-to-date, so she re-sang almost the entire album. Leftwich also hired some top studio pros from the L.A. area like Isamu McGregor, Carey Frank, Katisse Buckingham and Brad Dutz to bolster up the sound. This CD is the result of all this activity.

Whew! Now that that’s out of the way, we can talk about the music.

One of the things I liked about Segal-Garcia is that she sings out. She’s not one of these “soulful whisperers” who pass as jazz singers nowadays, but remember, she came up in the 1970s when being a jazz singer meant swinging hard and using all of your voice. At age 66, her timbre isn’t what it had been in her prime, but she can still swing, and the electronically-assembled band, which includes both the original musicians from 2011 (including the now-deceased MacIntosh) and the new ones brought in by John Leftwich. Of these, I was particularly impressed by Cary Frank on the Hammond B3 organ; he’s quite a player.

Another thing I really liked about the album is that Segal-Garcia doesn’t let the ballads sag. They’re sung and played with a jazz beat that really moves; in fact, I’d say that this is the overriding feeling of the entire album: .it moves. I also liked Leftwich’s arrangements; he knows exactly how to use a trumpet here, a Fender Rhodes there, a soprano sax there, and in the end it all works together.

About the only thing that disappointed me about the album was the fact that there aren’t that many instrumental solos. Heck, even Annette Hanshaw, way back in the late 1920s/early ‘30s, allowed her musicians a lot more solo room on her records. Just saying. Fortunately, when we do get solos, they’re all first rate. The only song I really disliked was Hippityville, despite a duo-scat chorus by Segal-Garcia and Norma Winstone. The song really doesn’t have much going for it in terms of tune construction or lyrics, it goes on too long, and Winstone, unfortunately, is one of those whispery lounge jazz singers I normally ignore.

Segal-Garcia’s performance of Sermonette, originally adapted from Cannonball Adderly’s original instrumental by Jon Hendricks for the super-group of Lambert, Hendricks & Ross, is a very good one, and here we get a nice trumpet-alto sax duet with wonderful backup vocals by Bill Redd and Irene Cathaway. There’s also a really bluesy, swinging bass solo by Paul Morgan. This one’s so good that it makes up for Hippityville.

I Get Along Without You Very Well is a perfect example of what I meant regarding her ability to keep “moving the beat forward” even in a ballad. It’s exactly the sort of thing that Nat Cole did so successfully throughout his 37-year career as a jazz singer and pianist. I strongly urge all young prospective jazz singers to listen carefully to this track and study what she does; you’ll learn a LOT even from such normally ignored lines as “to think my breaking heart” when you hear what Segal-Garcia does with it. This, folks, is masterly jazz phrasing. It keeps the song from “sagging” and losing shape.

Following this is another self-composed song, Shake it Down, and this one swings nicely from first note to last. Yet again, listen to the way she throws in those off-beat accents when she sings. The late Andy MacIntosh plays an excellent alto solo on this one, as does pianist Carey Frank. Recipe of Love is that rarity, a jazz waltz, and although the lyrics are fairly silly the tune is a good one and MacIntosh sounds particularly good here in his solo. Song 4 Sandy was written for Segal-Garcia’s niece when she was eight years old. The lyrics are cute, the song a swinger with a nice scat chorus and an excellent solo by MacIntosh.

Dreansville is a ballad by Henry Mancini. Again, listen to the way Segal-Garcia links the lines and the words. This is jazz singers used to do it, and should return to ASAP. Gypsy in My Soul is a medium-slow piece written by Clay Boland; it’s a nice song, but not a very interesting one. Happily, the closer is a nice uptempo version of Harold Arlen’s Gypsy in My Soul, and both Segal-Garcia and the band have a ball on this one. At long last, we finally get a trumpet solo (after the organ), and Simon Gardner acquits himself well with nice, clean bop lines. Segal-Garcia also sings a full chorus in scat. An abridged version of Hippityville closes out the CD.

Taken all together, this is a wonderfully upbeat CD with some really outstanding singing and killer playing from the band as a whole.