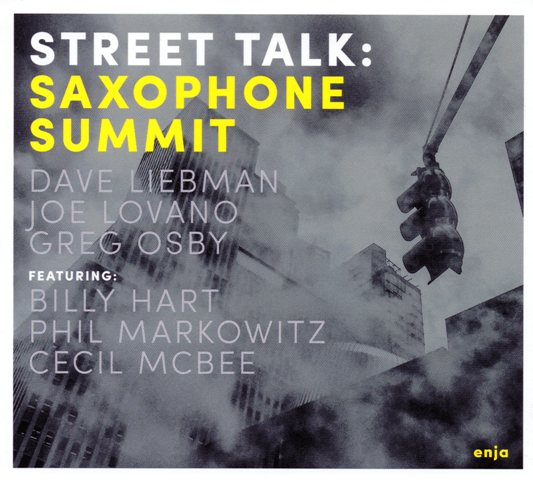 Somehow I just knew, sooner or later, that we’d reach a day when CDs would be issues without any liner notes at all. This is the first I’ve encountered, but I know there will be more to come. This one features the talents of three top jazz saxists, one each on soprano, alto and tenor, with the excellent bassist Cecil McBee and drummer Billy Hart along with pianist Phil Markowitz.

The Intro is pretty much just free-jazz squealing by the three horns sans rhythm, though it does settle down into a chord just before it finishes. Lovano’s Street Talk is a Monk-like piece with appropriately Monk-like playing from Markowitz before the sax trio plays its quirky, angular melody line. Lovano is up first with a solo, his vibrato-less tenor tone instantly recognizable, somehow managing to sneak in a bit of a Latin beat here and there. When he finishes, Liebman and Osby play a sort of modified chase chorus with the soprano player echoing the alto’s lines and vice-versa before they join forces to play opposing improvisations against each other. I was very impressed by Markowitz’ piano solo, which is even more cohesive than the saxes. The horns then return to ride things out.

Markowitz’ Point opens with a simple yet odd melody that sounded to me like the opening bars of Arditi’s famous song Il Bacio, but it quickly morphs into a strange-sounding piece in an off-meter, with Liebman running up and down his soprano with scalar and arpeggiated figures. The other two saxes then enter, playing a more sustained line as the rhythm slowly seems to iron itself out, approaching a standard 4. Osby is the first soloist here, sounding surprisingly lyrical, with Lovano coming in with a rough, dirty sound as contrast. They play against each other for some time, and Liebman also joins the fray. Markowitz’ solo is also quite angular, with a few Cecil Taylor-like flourishes up and down the keyboard.

Liebman’s soprano opens Loudly, an uptempo romp with a catchy but elusive melodic line. The composer dominates the first two choruses, playing angular, atonal lines up and down his horn. Truthfully, this didn’t say anything to me; it just sounded like exhibitionistic showing off without substance. Osby, however, is all business, playing a most interesting solo with form and shape. Markowitz plays another Monk-inspired solo, also quite good, and Lovano is really inspired, contributing a solo that, though somewhat angular, has shape and form and really swings.

Bassist McBee opens up his own A Portrait, which has a sort of quasi-Latin rhythm. The three saxes play together in thirds through the opening melody as well as the beginning of the next chorus, finally splitting up with Liebman first and then Lovano. Markowitz is his usual excellent self following the tenor, after which McBee gets a full chorus a cappella. I was rather disappointed by the ending, however, which just stops as if they couldn’t think how to end it. Following this is Osby’s Carousel. Considering the ordered logic of his solos, I was surprised to hear such an abstract piece, although careful listening reveals how well it is constructed. Then suddenly at the 1:30 mark, we get a regular rhythm (either 6/8 or 3/4) as the rhythm section and other two saxes come in. The reeds then play what sounds like a collective improvisation, following each other slowly up the scales in thirds, before splitting up to play a three-way conversation as McBee works out, double-time, behind them. A very interesting piece!

Tolji’s Dance is the contribution of drummer Billy Hart, who appropriately opens the proceeding with a solo. When the horns are at last heard, they are playing the swirling, quasi-Middle Eastern melody line before the three of them engage in an alternating reed trialogue. Osby gets an extended solo, followed by McBee in fine shape. The three horns, playing together, ride it out, followed by an Outro as wild and cacophonous as the Intro.

I found this to be an interesting album, but not one I’d willingly listen to a second time. The music just wasn’t all that interesting to me personally, but of course you may feel differently.