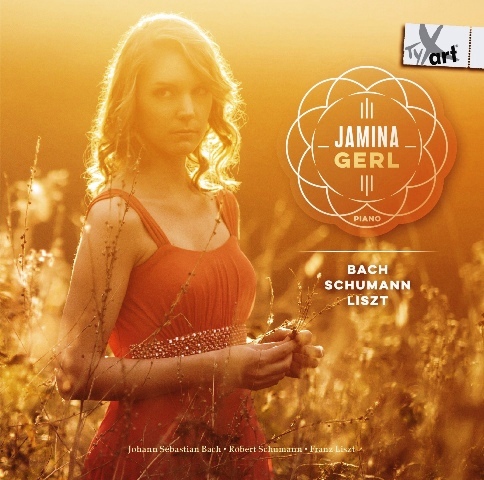 In a world of cookie-cutter pianists, all of whom win awards and all of whom play in the same general style—fast, brilliant, energetic and full of flash—it’s often difficult to spot a genuine artist on the rise, but a few moments spent in the musical company of Jamina Gerl convinced me that she has something different. I sense her as a true artist in the making.

Granted, she is still young and a bit brash in her self-assessment. She sticks to the Olde Fogey piano literature of the past; except for one piece by Ligeti which I discovered online, her repertoire consists of composers from the 18th and 19th centuries (I still think of Rachmaninov as a 19th century composer though he died in 1943). Yet there are arresting and interesting features to her performances that mark her, in my eyes at least, as potentially the Annie Fischer of the 21st century.

Certainly, one of the reasons I say this is that Gerl plays the piano like a man, by which I mean that she holds nothing back in terms of emotion or physical power. To watch her on one of her YouTube videos, you wonder where such a slender young woman gets such power—until you notice her well-developed upper arms, almost as muscular as those of a weight lifter. Perhaps some of her emotional commitment to the music she plays stems from her studies with Russian-born pianist Eduard Zilberkant. Whatever the case, Gerl has strength in abundance but, unlike Martha Argerich, she is not just a slam-bang showoff. Listening to her continuity of phrasing in both the Bach Prelude and Fugue on this CD and a performance of Beethoven’s immensely difficult Piano Sonata Op. 111 online, I heard sensitivity and understanding of what the music was about in addition to her technical skills. She knows when to pull back and how to caress a line when the music calls for it. Towards the end of the Beethoven Op. 111 sonata, I felt that she just missed the spiritual depth probed so well by Artur Schnabel, John O’Conor and Michael Korstick, but she is on the right path. She really does know where she is going artistically; she just hasn’t quite crossed that bridge into full identification with the music to reach Nirvana.

For me, the real test in this recital was the music of Liszt, who I generally consider to be an over-romantic blowhard. My favorite performances of much of his music are the recordings by György Cziffra, who played his music with an almost manic energy that lifted them above the romantic goop and made them sounds like interesting music. Gerl imparts some romantic touches to his music but does not linger or over-emphasize these moments and, like Cziffra, she understands the structure of the pieces. In many places her phrasing, as well as her attack, reminded me of Annie Fischer, who is one of my piano idols. With that being said, by the time she reached the third of these pieces I was getting bored because the music was so bad.

I also felt that Gerl didn’t quite have the structure of the oddly-shaped Schumann sonata down pat. Her performance, though interesting, tended to sound episodic in her hands, unlike those of Barbara Nissman, Jenny Li or Shura Cherkassky. She comes close, but there were several moments where I had the feeling that she was skimming the surface of the music to show off her technique and power and not to illuminate what she was playing. A bit more work is needed here to make it sound more Schumann-like and a bit less Liszt-like.

Following the Schumann, we return to Liszt with his Dante Sonata, and here Gerl is on home ground. What colors she brings out of the piano! And how apropos her playing is! I was delighted by every note and phrase; she clearly has this music under her skin, and knows what to do with it.

So there you have it. A very impressive outing on record for this young pianist, who has good instincts but still needs to learn how to penetrate some of Beethoven’s and Schumann’s more intimate moments before she can rest atop the Mount Olympus of pianists along with Cherkassky and Fischer. Right now she is clearly more than just a whirlwind, but not quite a “fine artiste.”