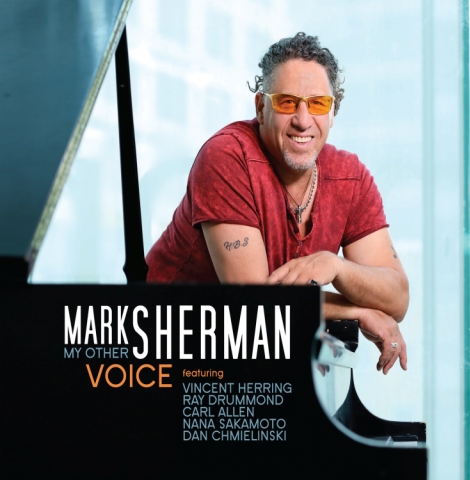 Mark Sherman is a well-respect vibes player in the jazz community, but as he puts it in the liner notes for this CD, “I’ve been playing piano since my mom encouraged me to take lessons at age 8. Over the years, I moved onto to drums, percussion and eventually the vibraphone. But all along, it was all about the piano…I teach at the piano, I write at the piano and I simply love to play the piano.”

On this disc featuring his piano playing, Sherman has surrounded himself with a wonderful band. Both alto saxist Vincent Herring and trombonist Nana Sakamoto are inventive, compelling soloists, and his rhythm section of Roy Drummond and Dan Chmielinski alternating on bass (the latter plays on the three tracks that Sherman composed himself) and Carl Allen on drums really swings.

Since I am not really familiar with his vibes playing, I can’t say whether Sherman plays the piano as he plays vibes or vice-versa, but his comping with the rhythm section and his work underpinning the two horns is superb. In his solo turns, he shows good imagination in his solos while tending to stay fairly low-key in his touch and style. He is perhaps at his most swinging, and clearly at his bluesiest, in Horace Silver’s Juicy Lucy, which he plays with great rhythmic verve and joie-de-vivre. I also liked the way Drummond played behind Herring on this track. The altoist is clearly influenced by black players of the late 1950s-early ‘60s with his biting tone and propulsive swing, adding quite a few double-time licks that run through the chromatics up and down his horn. Following him, Drummond steps forth, playing a very nicely-constructed solo of his own. When Sherman returns, it is to play a brief chase chorus with the drums, which then continue as Herring enters the picture and Sherman then returns.

On Milestones, Herring and Sakamoto play John Lewis’ melodic line in unison before Sherman enters with his solo. Here, his playing is for the most part gentler than in the preceding track, and he uses single-note lines in the right hand with occasional chords in the left. I really liked his invention and sense of musical structure, both pluses in the way he approaches a chorus. Herring is good, as usual, while Sakamoto takes two nice, relaxed choruses of his own before the ride-out. Ale, another Sherman original, has a loping, quasi-Latin beat and a brief but catchy melodic line using bitonal harmony (and extended rhythm in the breaks). Sherman swings lightly but politely through his own solo, taking the harmony of the theme and using it to propel himself through some nice variations. Herring is really flying in his solo, and then there’s a nice chorus in which Allen’s drums underscore a repeated lick played by Sherman.

Cole Porter’s ballad Ev’ry Time We Say Goodbye makes a nice contrast to the uptempo pieces preceding it. Here, Sherman shows that he can also construct interesting choruses at a slower tempo and using fewer notes played in a sparser style. After his first chorus, he keeps on building and developing the theme in different and interesting ways. Cedar Walton’s Hindsight is taken at a nice medium tempo, with Allen playing almost marching-band drums in the first chorus under the band, then continuing for a short while beneath Sherman’s excellent and quite busy solo. Our trombonist follows with a mellow, burry solo of his own; when Herring comes in, he is reflective in his first half-chorus before returning to his double-time playing.

Devotion’s Dance is a nice triple-time piece, probably in 6/8 rather than a straight 4, but with an irregular rhythm on the middle. This is undoubtedly the most complex piece on the album, but the highly experienced band handles it all well. Somehow or other, the tempo straightens out before the trombone and alto solos. The complexity returns for Chmielinski’s fine bass solo, however, which he handles with aplomb, as does the composer at the piano. The finale, however, is a bit disappointing: Sherman just slows down and stops.

We close with Tom McIntosh’s The Cup Bearers, a nice swinger if not one with a particularly strong or memorable melodic line. This one is mostly a string of solos, and good ones they are, too, particularly Sakamoto who plays here his most interesting contribution to the disc. Sherman, by contrast, is light and airy, almost too relaxed in his solo, at least until the bass begins prodding him in his second chorus.

This is a very fine album. It doesn’t really break any new ground, but it’s an effervescent disc to listen to, particularly on overcast days when you need a little cheer in your life.