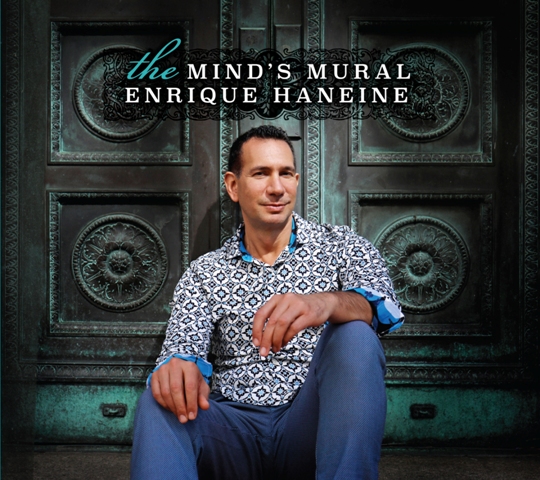 This CD, the follow-up to Enrique Haneine’s Instants of Time, features a quartet rather than a quintet. Gone are the two brass instruments (trumpet and trombone) as well as guest vocalist Lori Cotler; in their place is tenor saxist Anna Webber to complement Catherine Sikora on both tenor and soprano sax. The rhythm section of de Rosa on bass and Haneine on drums remains the same.

If anything, the music here is even a bit more angular in form and shape than on Instants of Time. The opening track, Once a Thought, contains elements of both Mingus and Ornette Coleman in its circuitous melodic shape and irregular rhythmic construction. Without a piano, Haneine can move the harmony around fluidly just as Ornette did and the melody around the way Mingus did. The one difficulty I had as a reviewer, however, was that the soloists are not identified on any of the tracks, thus unless Sikora was playing soprano I had a hard time telling the tenor saxists apart. With that being said, the first tenor solo up in Once a Thought didn’t really sound like Sikora’s work to me, thus I am tentatively attributing it to Anna Webber since the playing sounded more aggressive and more tied to scalar figures than those I am used to from Sikora, but I might be wrong.

The rhythm is so irregular, in fact, that it never does establish a pulse that can be followed by the ear. Our two soloists work around this problem by creating their own rhythmic space within the context of the very busy bass and drums, occasionally playing in synch but more often than not playing their own feel for what is going on rhythmically. Things are a bit less convoluted in The Seventh Layer, where the irregular rhythm at least bears the semblance of a beat the ear can follow. On this track, the two tenor saxists play the broken melodic line in unison while the bass and drums work around each other. There are no solos on this one until 2:17 into the piece, and here the soloist sounded like Sikora to me. Haneine’s unusual combination of Middle Eastern harmony and rhythm with a Latin beat occupies a unique space in today’s jazz music or, indeed, in any era of jazz that I can recall with the exception of Rabih Abou-Khalil’s arrangement of Juan Tizol’s Caravan on one of his Enya albums. Sikora (if that is indeed her) works her way around this mixed-media minefield skillfully, finding interstices in the music in which to pour her ideas. By 5:20 we hear a tenor saxist, possibly Webber, playing a repeated series of two notes in varying rhythmic stresses against the rhythm section. Towards the end, the two tenors play again in unison, weaving a variant on the opening melodic fragments.

The One Eleven Tale opens with just the cymbals; when the two saxists enter, playing the catchy but quirky melody, they are underpinned by the bass, which follows them both melodically and harmonically as Haneine’s cymbals continue to support them all. A more lyrical and somewhat conventional melodic line is heard next, with the two tenors weaving their way around each other before playing in thirds and leading into a bass solo for de Rosa, and a very fine one it is, too, improvising on both the melody and the harmony. The first tenor soloist, again, sounds like Sikora to me; she just has, to my ears, a warm tone and a very individual style that is at once creative and sensuous. The music slows down to a dead stop before Haneine’s cymbals pick up the tempo again and our two tenors return in unison then in thirds, for the final chorus.

Just Because bears no relation to the old Bob and Joe Shelton tune later sung by Elvis Presley, but is rather another very amorphous piece, this time very much in the Ornette Coleman tradition but for the Middle Eastern feel to the rhythm. The melodic line, such as it is, consists of just a few upward-rising gestures of two notes played in harmony by the saxists as the rhythm section works furiously to create a complex web beneath. After the three-minute mark, there are moments where the reeds return with their metaphoric melody while the rhythm continues roiling actively underneath. In Motionless Passage, Sikora (on soprano sax) plays a haunting melodic line over the bass with a few light snare drum and cymbal comments. Her soprano continues to meander through the piece, creating a delicate tracery, until Webber joins her around 3:08 with her own take on things. The two then continue in a duo-improvisation before coming together in unison near the end.

Hidden Mirrors begins with a Latin beat that sounds normal to the ear but, as we quickly learn, is anything but. The tenors play the serrated melodic line, really just a series of simple gestures, together as the rhythm section continues to work out. Then Sikora and Webber (I’m pretty sure in that order) play a chase chorus, following and building on each other’s ideas. At times they become quite complex, inventing snaky, quadruple-time figures that weave in and out of each other. De Rosa gets another solo here, less inventive at the outset but no less swinging, as Haneine plays his sticks on the rim of his drums along with cymbals behind him. The reeds return to work things out once again, singly and together, until the end.

Reality Shape has a nice, funky, medium-tempo lope to it although again in an asymmetric rhythm. It occurred to me, while listening to this track in particular, that one of Haneine’s influences might have been the Art Ensemble of Chicago, who I saw in person once (at the Chicago Art Museum, naturally) back in the late 1970s. The best way I can describe this piece is that it has a “shapeless shape,” which is to say that the two tenor saxists play pretty hot and heavy in what seems to be a rhythm of their own while the bass and drums go their merry way, playing their own thing. Yet the two reeds slowly increase the tempo and become quite hot and heavy as the whole thing appears to be reaching a boiling point before exploding into a free jazz free-for-all. They then pull back on the intensity, return to the opening line, and ride it out.

Like a Bronco is aptly titled, its pushy, rocking rhythm sounding much like a bucking horse at a rodeo (provided that said horse was a hip jazz steed and not a C&W aficionado), perhaps ridden by a Beat Bop Cowboy. “Wow, man, this horse is like REALLY messed up, y/know?” (Just a little joke!) Our two saxists take their turns playing solos, Webber sounding more fluid and fluent, Sikora sounding meatier as well as thoughtful. Here, more than in the previous tracks, it seemed to me that their playing contrasted more and blended less, probably intentionally. De Rosa’s bass also sounds like a Beat Bronco trying to shake off his rider. (“Hey, man, you’re crowding my space, OK? Like, go ride a pony at the corral!” It ends suddenly, not so much as if the bronco has thrown the rider off as if it was just bored by all the bucking.

When You’re Away opens with a bowed solo by de Rosa, beautifully played an articulated. Sikora comes in on soprano while Haneine plays cymbal washes underneath them. At 1:35, Webber enters on tenor, interweaving her own little story around Sikora; they continue in this manner until 3:25 when Webber’s tenor is heard playing solo. Then Sikora on soprano with de Rosa, bowed, playing under her and no drums. Haneine returns, first on cymbal and then also on drums, around 5:22 to complete the quartet. This whole piece has a rather melancholy sound about it.

Life of It’s Own is another of those asymmetrical belly dances, like the ones we heard on Instants of Time. The two tenors again play in unison on this one at the outset, move into thirds, then return to unison. Oddly, there are no solos on this piece, although there is a chase chorus beginning at 4:53 that eventually moves into a duo-explosion. A weird piece, to say the least. We end our adventure with Komet. a Middle Eastern-Latin fusion piece that almost sounds like a continuation (or development on) the previous piece, except at a slightly faster tempo.

This is yet another excellent album by Haneine. I look forward to his future projects!

2 thoughts on “Haneine Returns in “The Mind’s Mural””