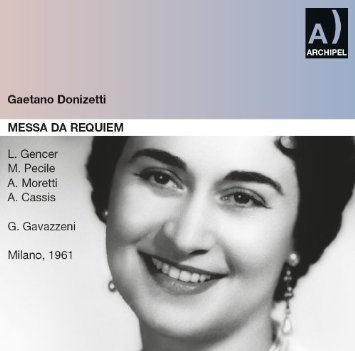 I was poking around on the Naxos website for reviewers, trying to see what recordings were available with soprano Leyla Gencer, when I tripped across this release. At first I thought it was a misprint: a Requiem Mass by Donizetti? Surely they were wrong. But they weren’t.

Where they were wrong, however, was in the identification of the tenor, listing one Armando Moretti instead of Ennio Buoso; the elimination of the fifth soloist, bass Agostino Ferrin, who sings on two numbers; and the year of the performance, giving 1971 instead of 1961. I found the correct listing of the soloists and the correct date on a posting of this recording on YouTube, and checked it out. Ennio Buoso does have one other posting on YouTube, singing “Vengo à stringerti, dolce mia vita,” and by making a careful comparison I determined that his was, indeed, the tenor voice on this recording, thus I also accepted the later date. Another reason I believed the later date was that soprano Leyla Gencer’s voice has here that unusual flutter which she only picked up around 1965 or so. If you listen to Gencer’s earlier recordings, such as the video of Il Trovatore with Mario del Monaco or the 1960 Don Giovanni which I reviewed earlier on this blog, you will discover that she did not have that flutter in the late 1950s/early ‘60s. But Archipel is a small Italian label of indefinite origin with only three major outlets, Naxos, Presto Classical and Berkshire Record Outlet, and I’m only too familiar with how often the Italians get things wrong.

I doubt that many opera lovers will know (I sure didn’t!) that Gaetano Donizetti wrote more than 100 sacred works, most of them unpublished, although the majority of these are short occasional works and academic exercises penned when he was being tutored by Simone Mayr. After 1824 he wrote only a few such works, a Miserere for voices and orchestra, an Ave Maria, and this Requiem. It was the last of his sacred pieces, begun in 1835 in memory of the death of Vincenzo Bellini, his friend and rival in the opera houses. It was finished by December, when it was to be performed, but for some unknown reason the plans for it fell through. It was finally premiered in 1870, 22 years after Donizetti’s death, in a performance heavily criticized by the Italian press for being weak. And that was the end of its performance history in Italy until this performance was given a century and one year later.

The work is often claimed to be “operatic,” but the vocal writing bears only a small resemblance to Donizetti’s operas. The choral and orchestral passages are richly detailed and quite dramatic, including some rigorous counterpoint in the Kyrie and Lacrimosa. Another interesting aspect is that the soprano and mezzo get very little to sing in this work except in a few ensemble passages; most of the solo vocal writing is given to the tenor and first bass (baritone), with a second, lower bass voice added in two selections, the “Tuba mirum” and the “Confutatis maledictus.” Because Gavazzeni hired the famous soprano Gencer for this performance, and she wanted a solo to sing, he gave her the tenor’s “Ingemisco,” a much slower, quieter and more lyrical piece than the one by Verdi. (This may also have been conditioned by the fact that the tenor in this performance, Ennio Carlo Buoso, was a “crossover” artist of his time, like Kenneth MacKellar in the U.K. and Sergio Franchi in the U.S.)

Although this Requiem is not quite on the same exalted level as those of Cherubini, which preceded it, or Verdi, which followed it (and which was clearly influenced by Donizetti’s, particularly in the “Dies irae,” it shares with the Requiems of those two composers the fact that it is the greatest work that those three composers wrote. The Cherubini Requiem is also little known, mostly because it has no solo singers but only a chorus, yet as Toscanini’s recording proved it is a masterpiece, and every opera lover worth his or her salt knows that the Verdi Requiem is superb from start to finish.

Indeed, as you go through this work you will continually discover outstanding passages. Although much of the music is lyrical, none of it is banal. Donizetti avoids giving the singers high notes or even melodic lines that resemble arias. Moreover, one can tell that this piece was really written from the heart; at times, it is deeply moving.

There are two other recordings of this Requiem commercially available, a live performance on Dynamic and a studio recording from 1988 on Orfeo. The first of these has a rather weak conductor and defective singers, and adds a one minute and nine-second prelude played by an organ that I found superfluous. The second of these features some outstanding singers, particularly soprano Cheryl Studer and first bass Jan Hendrik Rootering, but this edition adds much music that Donizetti meant to be cut from the finished work and the conducting is so lackluster as to make an “Adagio” of the entire piece, robbing it of energy and vitality. That leaves only this one as really good representative of the Requiem. Gavazzeni conducts it almost with the energy of a Cantelli or Toscanini; both the orchestra and chorus give a much better account of themselves than was usual for Italian forces of that era. Occasionally, one of the solo voices seems to be a little off-mic: Ferrin is just barely audible in the “Confutatis maledictus,” which may be what gave Archipel the idea that there was only one bass in the performance.

Regardless of the caveats mentioned earlier, this is a piece, and a performance, that all music lovers should hear. It will give you an entirely different perspective on the composer of such tripe as the “Queen Trilogy” operas.

One thought on “Donizetti’s Excellent “Requiem””