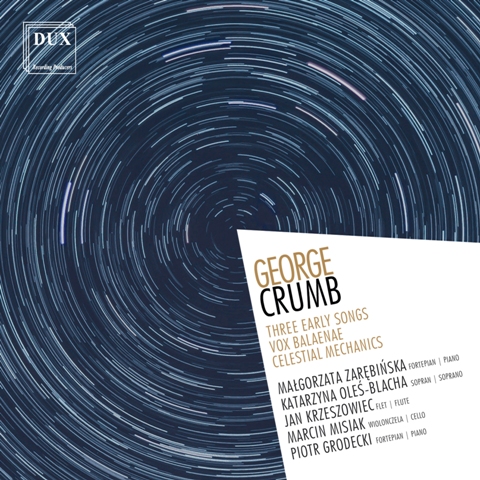 Here’s an unusual album of music by George Crumb, including works not normally heard or recorded, ranging from his 3 Early Songs from 1947, when he was only 18 years old, to the often-overlooked Makrokosmos IV from 1979.

It was the first of these that interested me the most, having never heard anything by Crumb before the early 1960s. In this early cycle his music is more “normal” rhythmically but already adventurous harmonically, often using chord positions outside even the parameters of the “Impressionistic” school. The melodic line, however, is essentially tonal and more melodic than one is used to in his music. Our singer, Katarzyna Olés-Blacha, has a steady voice with a pleasant timbre but is a bit nasal in production. Although her English is heavily accented, she has obviously worked hard to make her diction as clear as she possibly can, which I greatly appreciated. The best way I can characterize this music is that it’s like a cross between Koechlin and Stravinsky, Koechlin because he was more harmonically quirky than Debussy or Ravel (although the influence of Debussy is certainly not out of the question). Crumb uses quite a few pentatonic scales and harmonic dyads which gives the songs an unusual color.

But if you think this was an ear-opener, wait until you hear the Vox Balanae or “Voice of the Whale” for three masked players. This opens up like Middle Eastern music, using typical harmonies of that region played by the flute and cello. Both instruments are electronically transformed in sound to simulate the sound of a whale. By this time (1971), Crumb was already using a “prepared piano” which fits in with the other two instruments, and there are certainly times here where the music resembles other contemporary works of this period such as Ancient Voices of Children, but even so this score inhabits a different style and sound-world. It is in eight movements: an opening “Vocalize,” “Variations of Sea-Time, Sea Theme,” five variations and a “Sea-Nocturne (…for the end of time.” Variation I, “Archeozoic,” has a typical Crumb sound to it, but Variation II, “Proterozoic,” sounds like something by Harry Partch, the cello playing sliding quarter-tones in its upper range. I suppose you could say that it sounds like typical Crumb in its strangeness but atypical in its form of strangeness. In “Mesazoic,” the prepared piano almost sounds like a cimbalom, again an instrument one associates with Partch. A strange work, indeed!

Makrokosmos IV, titled Celestial Mechanics, is not as often recorded as Makrokosmos I-III because it calls for two pianists playing the same prepared keyboard in four-hands style. Here we finally get the chance to hear our intrepid pianist, Małgorzata Zarębińska, really shine, aided by fellow-pianist Piotr Grodecki. The music is more rhythmically insistent than the previous three works with this title; it almost has the feel of George Antheil’s Ballet Mécanique but with more widely-spaced intervals and more unusual chord positions. These “Cosmic Dances for Amplified Piano” are titled Alpha Centauri, Beta Cygni, Gamma Draconis and Delta Orionis, and in the second of them one hears the “spacier,” less solidified style that Crumb is noted for. In Gamma Draconis we’re back to the rhythmic, Antheil-like style, except that the music becomes even more unusual with several crushed chords and other ambient effects.

This is an excellent album of Crumb’s music.