Ernesto Cervini, the highly talented Toronto-based drummer who also acts as promotional agent for some of the best jazz musicians in his part of Canada, has participated in some very interesting combinations in recent years. This, his most current group, is the collective trio which pleases to call itself Tune Town.

But if ever there was a misnomer, this is it—although, knowing Cervini’s sense of humor, undoubtedly on purpose—for “Tune Town” plays very modern jazz, sort of a post-Sonny Rollins or post-Tubby Hayes sort of progressive bop with constantly shifting rhythms and unusual melodic and harmonic configurations that don’t so much keep the listener tapping his or her toes as sitting on the edge of one’s seat, trying with all one’s might to follow what is going on.

They set the tone of this album from the very beginning with A Sonic Handshake, one of two pieces here which are collaborations by all three members of the group. The sparse opening figure—one cannot really call it a melody—is almost immediately split apart, put back together again, developed and redeveloped by this highly talented trio. One of the things I liked about their performances, as in the case of other CDs featuring Cervini on drums, is their absolute unity. This is not a band that goes off in different directions, every man for himself, playing whatever comes into their heads even if it’s off the wall. Everything fits together somehow, as if the entire piece and arrangement was pre-written.

And if you think A Sonic Handshake is unusual, wait ‘til you hear the second piece on this CD, Cervini’s The Monks of Oka. I’m not sure where Oka is or what the monks there do, but judging from the soft modal tenor sax moans at the outset, after which it morphs into a sort of Eastern tune with Western rhythms, I think they may just possibly be taking some hallucinogenic. At the 2:25 mark the music not just slows down but degenerates for several bars until Kelly Jefferson, by now switched from tenor to soprano sax, plays some freaky fragmented phrases that eventually seem to gel into a coherent pattern. But only just. He then deconstructs his own construction with isolated, high-pitched notes played softly into the ether before returning to play a somewhat melodic figure, with Cervini suddenly ramping up his drum kit in the background as if to kick Jefferson into a higher gear.

Next up is a very original arrangement of Duke Ellington’s Sophisticated Lady in which the famous melody is merely hinted at in the opening section, where Jefferson plays a repeated pattern of four long-held notes until finally getting into the real tune at 1:36. This lady is really sophisticated, in a 21st-century way, and yet I think that if Ellington were still alive he’d really appreciate this version because, in the end, it is respectful of his melody while still taking it places that this lady had never been before. And I shouldn’t let my appreciation of Artie Roth’s very inventive bass go unappreciated, even though he mostly supports what’s going on rather than soloing. He does get a solo in the opening of his own composition, Split Infinity, and it’s a gem, leading into the nicely spaced but somewhat elusive melodic line played by Jefferson’s tenor. Cervini continues to fragment the beat in the background, whipping up some excitement as the piece progresses, yet oddly Jefferson stays pretty much locked into the theme. But surprise! It’s Roth who develops it, with the saxist adding a few notes for commentary. Infinity splits near the end. 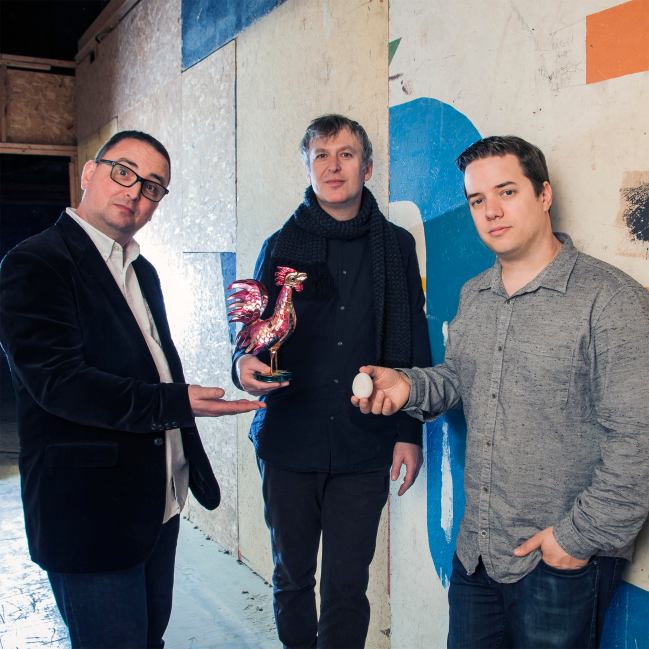 Tune Town (Jefferson, Roth & Cervini) presenting us with both the chicken AND the egg.

Our next hit from Tune Town is All of You, one of Cole Porter’s more obscure songs; this gets a nice swing treatment, well, except for Cervini’s asymmetric drumming in the background. You might break your foot trying to tap your toes to this one. Jefferson tosses a little Coltrane into his solo here before Roth slows the tempo a bit for his bass solo. Cervini’s original, The Mayor, starts out as a snappy little piece before it gets deconstructed, particularly by Jefferson who throws in some fast notes in spit style. We now turn our radio dial to Infinity Past, the most fragmented and far-out piece on the disc. This one seems to have blown up before the band got hold of it.

The one Jefferson original on here, Kindling, is played again on soprano. It starts off somewhat ambiguously but moves into a nice fast swing with the composer joyously tossing brilliant eighth-note figures around. A Transient Space is another freaky piece, beginning with soft bowed bass along with equally soft drumbeats in the background. Jefferson’s soprano sax comes floating into our soundspace like some visitor from outer space. Later, gentle brushes on the drums usher in the saxist’s spacey solo. Eventually a beat coalesces in a slow 4, I think.

Hey, everybody, it’s Tune Town! Put on your poodle skirt, poof up your hair, grab your favorite soft drink and let’s dance!