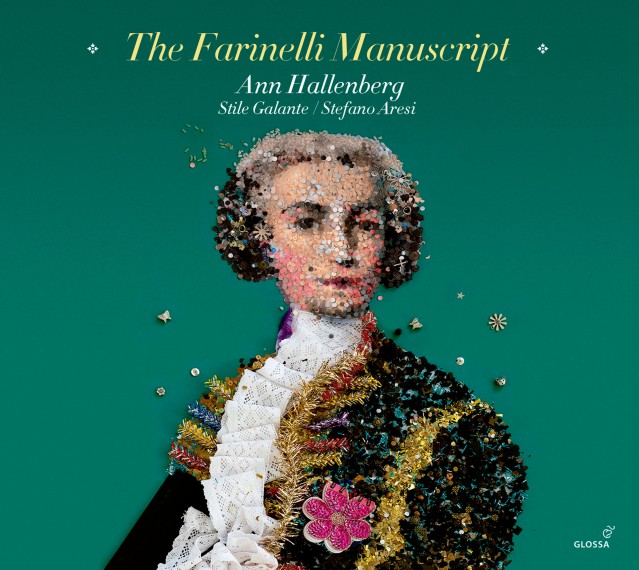 Carlo Broschi, who sang under the stage name Farinelli, was the most famous and admired of the 18th-century castrati. It wasn’t because his voice per se was beautiful—none of the castrati had really beautiful voices, because they were freak voices, childish in pitch like a boy soprano but without the sweetness one had in one’s youth, but a somewhat strange sound like that of a baritone electronically pitch up two octaves where no baritone voice should deport itself—but because of his “affective” phrasing (the word that Pier Francesco Tosi used to describe delicately shaded singing that moved the listener) combined with such “decorative” elements as trills, grupetti, mordents and the like. Farinelli supposedly had a range of around three octaves, and although he was categorized as a soprano his top note was a soprano B-flat or B, which nowadays is in the range of most mezzo-sopranos.

According to the liner notes:

At the end of March 1753, from Madrid where he had been residing since 1737, Carlo Broschi, “Farinelli”, sent to the Empress Maria Theresa a magnificent and lavish hand-written volume of some ninety pages, elegantly decorated with intricate ornamental frames and edgings in light and brilliant colors. The manuscript, today kept in the Österreichische Nationalbibliothek (Mus. Hs. 19111), contains eight pieces of music (six arias and two recitatives) which the celebrated castrato singer described in his preface as being “a small choice of those arias which, in an uninterrupted series over many years, have contributed in my mouth to the private comfort of my endearing Sovereigns.”

This album contains the music in that manuscript, sung by 52-year-old Swedish mezzo-soprano Ann Hallenberg and accompanied by the early-music group Stile Galante. To say that Hallenberg can certainly sing these pieces, and do so effectively, is an understatement. She is absolutely scintillating. What is more open to question is whether or not the singing style represented here is an accurate reflection of Farinelli’s method of singing, and whether or not Stile Galante play in the manner of a real 18th-century orchestra.

To answer the first question, we must turn the clock back to 1987, when the Italian soprano and musicologist Nella Anfuso impersonated Farinelli in an album of his “preferred arias” on an Auvidis CD. As the liner notes by Annibale Gianuario explained,

Farinello’s [sic] art was the result of assiduous work, without which he would have been unable to achieve what he did. {Giambattista] Mancici comments again that even at the height of his success he never abandoned his technical study, so that he not only maintained but even improved his technique so that he could always control his expressive virtuosity, becoming ever more moving and passionate…It is important to describe here the artistic, technical and aesthetic qualities of Farinello’s singing, based on explicit and irrefutable evidence as shown in the works cited by Mancini…his vocal style is imprinted with warm sounds, full and rich in the chest resonance, whence springs his mastery of expressive virtuosity, giving feeling to passages of otherwise sheer bravura. The writing extends over three octaves (a detail found also in Quantz) with vocal acrobatics to an extreme degree: trilli cresciuti e calati, messe di voce, agilita martella and especially the wide ascending or descending leaps found in the air Al dolor que va sfogando, for which he composed the music…Note also: descending octave leaps with trills, series of augmented and diminished trills, etc.

It should also be noted that most of the “trills” that Farinelli sang were what the Italians called “spotted flute technique,” i.e., what old-timers referred to as the “Baroque trill”: a single note repeated very rapidly as a series of staccato notes, as if played on a flute, and not the alternation of two different tones. This technique is employed by Anfuso on her CD but not by Hallenberg, whose trills are conventional ones.

At the time I acquired the Anfuso CD, I was nearing the end of my ten-year investigation into the singing methods of the old singers and the attendant proper style for singing such music, so I had read quite a bit about Farinelli and his accomplishments before I heard the disc—and they confirmed what I had read. 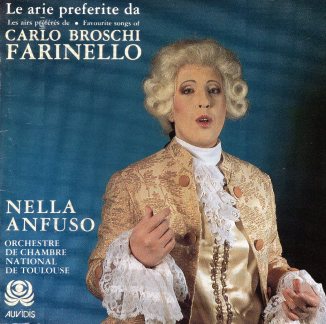 There are other differences in style and execution between the two CDs. In the opening section on both CDs, Son qual nave, Hallenberg is fast and dazzling, occasionally using scoops to approach notes from below, whereas Anfuso is slower and more seductive. Even in the very opening phrase, Anfuso creates the impression of softness and beauty by carefully modulating her tone, producing a mezzo-forte, piano, and mezzo-piano within the space of two bars in her singing. Hallenberg is much more dazzling, sounding a bit like a Swedish Cecilia Bartoli (who also recorded this aria). This is fine for the average Baroque specialist; it is indeed quite spectacular singing in the bravura style; but it only rarely achieves the affective elements for which Farinelli was famous. Incidentally, the compilers of this CD list the composer of this aria as “Anonymous [Carlo Broschi Farinelli?],” but Anfuso, who spent years researching Farinelli’s repertoire, attributes it to the singer’s brother, Riccardo Broschi, who was a composer. Likewise the aria Al dolor che vo’ sfogando, attributed here to “Anonymous [Geminiano Giacomelli?],’ was attributed by Anfuso to Farinelli, Carlo Broschi, himself, so that is the attribution I have used in the header for this review.

Now, as to the orchestral style, it is sharp and brilliant with constant straight tone in the strings as modern-day musicians are taught to play early music whereas Anfuso’s accompaniment by the Orchestre de Chambre National de Toulouse simply uses a light vibrato. Neither are stylistically correct, but Anfuso’s accompaniments are closer to the mark. Strings in those days—the good players, anyway—used straight tone for fast passages and a light vibrato for sustained notes. Yes, there were orchestras back then whose string sections used straight tone all the time, but these were always considered the amateur musicians and not the pros. In fact, there is an account of one such orchestra (I don’t have it handy at the moment, alas) in which the writer complains that the only way one can enjoy such an orchestra is to sit very far back in the hall, because the closer you are the more abominable the scraping sound is to your ears. So, you see, even in the 18th century there were people like me who can’t stomach constant straight tone, because it was considered crude and unmusical.

I am not making these observations to bash Hallenberg or Stile Galante. She is singing and they are playing in the accepted style for Baroque music nowadays, and taken at face value it is a very exciting album. And indeed, Hallenberg’s singing is not without moments of tenderness—listen, for instance, to Gaetano Latilla’s Vuoi per sempre abbandonarmi? and you will hear a few—but overall her singing is designed to dazzle the ear, not to seduce. In Ogni di più molesto, she does introduce a moment of sweet “come hither” seductiveness, but it’s fleeting and not sustained. Most of her singing is outward, not inward.

So why isn’t Nella Anfuso and her superb work in this field better known? One reason: she didn’t have a beautiful voice. It was rather plain and dry-sounding, only beautiful in her use of it, not in the sound she produced. But that, again, was probably more like the real Farinelli than Hallenberg’s silver-plated timbre and ringing high notes. The one thing that I found fault with Anfuso on was that she was predominantly affective at all times when she should have taken some of those arias a bit faster and given us the dazzle to complement the warmth. Yet if someone asks me, “What did Farinelli sound like?,” it would be Anfuso’s recording that I would play them. Yes, the style sounds a little stilted and perhaps a tad overdone, but that’s probably how Farinelli sang.

The reader of this review is thus faced with a dilemma: to obtain this disc or not. I put it to you this way. If you want to hear a beautiful and technically accomplished voice singing Farinelli’s arias, accompanied by violins that sound like electronic whining, go for it because that’s what you get here. If you want to hear what Farinelli’s style was really like, you need to dig up a copy of Anfuso’s disc because whether you like it as much or less is immaterial. That is how Farinelli really sang.

And that’s the name of that tune!