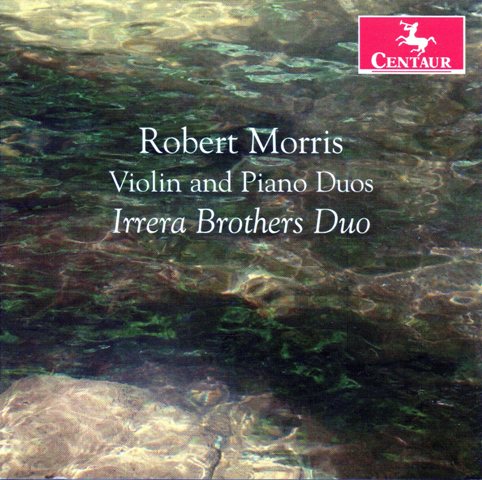 Robert Morris, who has been teaching composition at the Eastman School of Music since 1980, here presents his music for violin and piano played by the Irrera Brothers. The music itself is very much of the 12-tone school and built around leaping figures in the violin part, but what distinguishes this disc is the emotional involvement and intensity of the performers.

Which is not to say that the music itself is “ordinary” in the normal sense of that term. Morris is clearly a more interesting (to me) composer than Elliott Carter, for instance, whose music was similarly 12-tone but unspeakably ugly and often indecipherable. Morris hears his own compositions as music, not as an intellectual game played with his listeners, and thus holds one’s attention as the music is developed, and the Irrera Brothers help bring it to vivid life.

In the first piece, In Variations, Morris also uses luftpausen as a way of making his music less consistently busy and somewhat easier to grasp, with good results. In the second piece, titled …gradually… , Morris uses similar figures but rearranges them. Here it is the piano part that is considerably different, highlighting a moving or “walking” bass line of single notes against the violin’s lines. They range from tender to fierce with various mutations in between as well as moving the interaction of the two instruments “from agreement to conflict.”

But the weakness of Morris’ music is that it all sounds pretty much alike. Because he uses and re-uses the same devices over and over, it doesn’t really go anywhere interesting, and the lay listener would have a very hard time trying to tell these pieces apart. Since I was playing this CD, as I normally do, in a different room from my computer and listening on the speakers in the computer room, I had no idea when the second piece ended and the third began, and I don’t think you’d be able to tell without looking either. Yes, it’s better music than Carter’s, but it’s nowhere near the level of genius one hears in Webern or the inspiration in the music of Schoenberg or Berg. It’s good but not great.

Nonetheless, as I mentioned early on, it is the playing of the Irrera Brothers that makes this disc. If just one of these pieces was heard in a recital, surrounded by contrasting works in other styles, I’m sure it would make a good impression, yet even though the CD is less than 44 minutes long, this much of Morris’ music is a bit much to take in one sitting. Better to listen to just one piece at a time, stop the CD and try to absorb it all before moving on to the next.