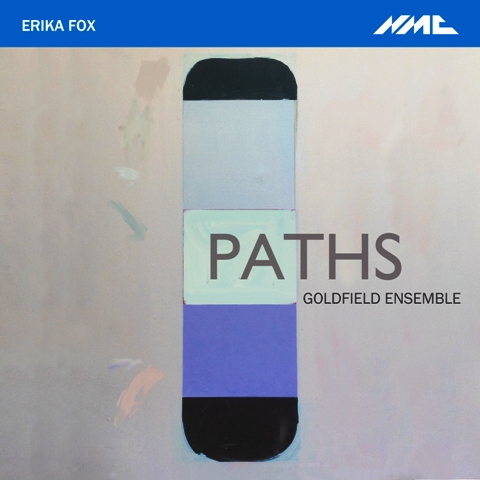 Erika Fox, an 82-year-old Austrian refugee who settled in England with her family at age three, is a British music educator and composer. Her music was discovered by Kate Romano, artistic director of the Goldfield Ensemble, a few years ago when listening to Nicola LeFanu’s BBC radio program “Inspiring Women in Music” three years ago, and she was utterly fascinated.

The music presented here is for the most part slow-moving, albeit with moments of quicker tempi and energy, but what distinguishes it is her eclecticism. Inspired in part by Eastern European folk music and Hassidic music, Fox’s creations are modern in both its melodic lines and her use of harmony, yet somehow retain qualities of the Old World that are almost forcibly aligned with the New. In a way, it’s like opening a door to another era only to find the inhabitants speaking the music language of the present in order to express their older sentiments.

Fox also composes in sparse lines. During the 1970s, she was involved with such groups as the Fires of London, the Nash Ensemble, Dartington and SPNM; for 20 years her works were performed regularly and even broadcast in the UK. Her large ensemble piece Shir was featured on Channel 4 television, and her puppet music drama The Bet was performed more than 100 times. Yet despite this exposure, she remains a relatively obscure figure on the British musical scene.

Here, at last, Fox is being given wider exposure on this NMC release, and if you go to nmcrec.co.uk/recording/kaleidoscope you can stream Kaleidoscope, which won the 1983 Finzi Award for best composition. Listening to the first and longest piece on this CD, Paths Where the Mourners Tread, I also heard a kinship to a modern composer whose work I really like but who, like Fox, is not as well known for his own pieces as for his other work in the musical world, Leif Segerstam. With its sliding chromatic violin passages that sound like crying creatures from Alpha Centauri, edgy string tremolos and an amorphous sense of construction, Fox’s music and that of Segerstam could easily be twins raised by wolves, civilized humans with a touch of the wild about them. The music doesn’t so much steamroll you as creep up on you and wind its way into and around your psyche, creating disturbing yet strangely interesting figures that somehow manage to touch several different tendrils in your mind.

As Romano puts it in the notes, rehearsing her music opened up surprises to them as the music took shape: “there is very little conventional development in her music. Often, the ‘argument’ takes place within a single line; the linear journey is quickly completed and a new one begins. Don’t listen for things to come back – they won’t. Or, if they do, they come back as collapsed fragments, intricately woven into an ever-changing tapestry of sonorities. It is inward-reaching music, like a series of ever-decreasing spirals that feels both alien and utterly compelling. Erika Fox agrees that the self-contained lines are closely connected to the wordless chants of the Hasidic rabbis.”

Fox herself describes the ideas she hears in her head as “foreign to performers, though I myself did not recognize their foreignness.”

Quasi una cadenza is a bit more rhythmically swift and active than the first piece. The clarinet in particular interjects Hasidic or Klezmer phrases while the violin, French horn, piano etc. pursue other lines. Most of these bisect and intersect one another; Fox seldom writes for a group of musicians as a unit, to play together. Her harmony is both fluid and suggested rather than stated. On a personal note, I was also delighted to discover that young Ben Goldscheider, whose French horn recital on Willowhayne Records I previously raved about, is a member of this group. Kate Romano is the clarinetist, but the booklet doesn’t say whether or not it is she who plays the bass clarinet on Quasi una cadenza. The other members are Nicola Goldscheider on violin, Bridget Carey on viola, Sophie Harris on cello, Carla Rees on flutes, Anna Durance on the oboe and English horn, Richard Uttley on piano and George Barton on percussion. All of them play with pretty much the same energy and enthusiasm as Goldscheider does on horn.

The third piece, inspired by Fox’s visit to Stravinsky’s grave in San Michele, Venice, is a long piano solo. Once again Fox uses juxtaposed themes which she says are then “’clarified’ by dint of varying repetition, becoming familiar together.” Among these, which she lists, are loud octaves, Oriental melodic fragments, ostinato figures and “Stravinskian” chordal passages. Uttley’s playing is sensitive and exciting in turn, as is the music; despite its Stravinskian inspiration, it somehow sounds unfamiliar and strange—again, as if one had opened a door to the past and suddenly found the inhabitants behind it speaking a language that sounded like ours but was foreign in a strange way and not quite graspable. To a certain extent, I found the repeated ostinato figures to be the glue that held the rest of the piece together, despite their being less frequent and not really the “meat” of the work. Perhaps this is because I personally “heard” these figures as being somewhat related to the “walking bass” that also permeates portions of it.

In Malinconia Militaire, Fox was inspired by a poem based on a piece of music, “Webern Op. 4” by Amelia Rosselli. As Fox puts it, Rosselli’s poems “are tense, with violence and lyricism presented together as an integral part of the whole structure,” and these qualities are evident in this piano quartet. Unlike the previous works on this disc, Malinconia Militaire is in three discrete movements, the second being the fastest and edgiest and the third the darkest despite its very slow tempo, which briefly picks up around the 2:40 mark. It ends in the middle of nowhere.

Café Warsaw 1944 was again influenced by a poem, this one by Czesław Milosz of his memories at a Polish café frequented by his friends and colleagues, of which he was the only one to survive the War. Fox makes it clear in her liner notes that although literary forms inspired her music, the scores themselves are not meant to be poetic allegories; for her, music is absolute and an expression in and of itself. The first two movements are sinuous and exploratory; like the first piece, it sort of oozes across your mind, getting its tendrils into your cerebral cortex. This changes, however, in the third section, a quirky scherzo marked by busy percussion (including cymbals) and a piano solo in the midst of edgy atonal figures played by the individual strings and clarinet.

The bonus track, Kaleidoscope, is in itself nearly 20 minutes long. Here, soft, plaintive notes played by the cello and accented by the harp expand into portamento figures played by the strings with flute, vibes and harp accents. It is indeed a kaleidoscope of sound, the music moving forward on its own pace and with its own strange inner logic. A little repeated flute figure then dominates while the vibes continue to come and go in the background, along with the strings and then the harp playing edgy figures. Eventually things morph and change via faster tempi, edgier figures and other devices, yet it returns to the slowish pace of the opening.

Fox’s music is really fascinating and different. This album is a gem, which I hope gets noticed by more and more people within the classical community.