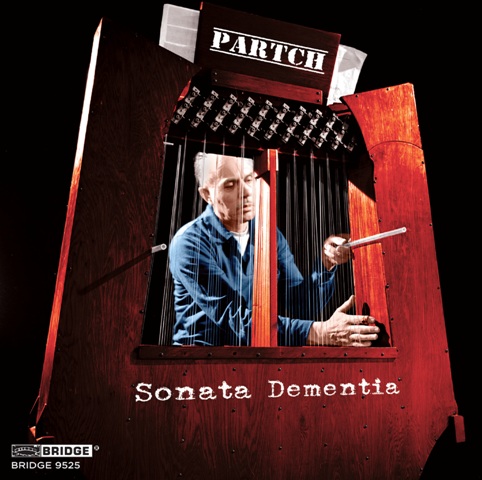 This is Vol. 3 in Bridge’s series devoted to the microtonal music of Harry Partch. I reviewed Vol. 2, Plectra and Percussion Dances (Bridge 9432) for another venue when it was released in 2014. Like its predecessor, it is performed by the group of musicians collectively known as PARTCH. Most of their individual names are listed above. The two exceptions to this are the bonus tracks, a rare 1904 Edison cylinder of an Isleta Indian chant, one of several that the composer was asked to transcribe by the Southwest Museum in 1933. Partch later paraphrased this Cancion in the final Intrusion, titled “Cloud Chamber Music.”

As one can see from the above list of instruments, Partch was forever coming up with minute cracks in the tonal system, trying to break down the “bonehard system” of tonality that many a modern composer, including Leif Segerstam, has complained of, yet few of these composers seem to know of, or know of but don’t use, the 43-tone-to-an-octave pianos, prepared guitars and adapted violas and marimbas that he invented.

I had always been curious about “boo-bams,” the electronic drums used by jazz composer George Russell on his first album for RCA Victor in 1956 (the “Smalltet” session). It turns out that they were invented in 1951 by percussionist, drum maker and recording engineer Bill Loughborough, and he didn’t have to work too hard to sell Partch on the idea. The real eye-opener here is that Ulysses at the End of the World, subtitled A Minor Adventure in Rhythm, was originally written for iconic West Coast jazz trumpeter Chet Baker, who liked the piece and wanted to play it but was too heavily booked to get around to it. By Partch’s standards, the piece is relatively conventional, staying fairly close to a normal harmonic base, and of course using jazz rhythm which he seldom did before or since. But Partch liked the piece and eventually added a baritone saxophone part in 1956, emulating the famed partnership that Baker had with Gerry Mulligan. That is the version heard here, and it’s a fascinating work, tightly constructed.

In the 12 Intrusions, Partch started out, again, fairly conservatively. The first study is based on the old Greek pentatonic scale, the second on Archytas’ Enharmonic, but from then on we get progressively stranger in sound and pitch. The third piece, “The Rose,” begins in what sounds like a tonal base, but quickly morphs chromatically into odder and odder territory. This is also the first of the Intrusions to have a half-sung, half-narrated vocal (other than spoken introductions), but the sliding chromatics of “The Crane,” which sounds like a take-off on the Blue Danube Waltz, is clearly in freaky territory. By the time we reach No. 6, “The Wind,” we are clearly in a microtonal universe, touching tonality occasionally but not regularly. (To paraphrase an old joke from A Thousand Clowns, “I’ll only go to the world of reality as a tourist.”) Hey, let’s not kid ourselves here. Harry Partch was taking some kind of mind-altering drug. I just want to know what it was and if I can get it cheap!

Windsong started out as incidental music for an experimental film by Madeline Tourtelot called U.S. Highball. When she showed Partch the rushes from the film—she and a friend playfully running around sand dunes near Lake Michigan—he thought of the Greek myth of Daphne and Apollo and agreed to work on that first. Partch’s music was meticulously timed to match the film edits and cues, and he performed it himself. This is its first recording of the original version for diamond marimba, bass marimba, kithara and boo-bams. It’s mostly percussive music with elements of microtonality here and there. But it’s also very playful music in addition to being strange; if you just sit back, relax and enjoy it, it’ll come to you.

I won’t even try to describe the Sonata Dementia except to say that it’s a microtonal laugh and a half. Partch clearly wanted this to be humorous to the listener, thus the strange rhyming introductions to each section of the piece. Too often, people tend to take avant-garde music too seriously, but Partch had spent too many years living as a vagabond, and with vagabonds, to be pretentious.

The Isleta Indian chant is fascinating and, for a 1904 cylinder, surprisingly well reproduced. The 8 Hitchhikers’ Inscriptions from a Highway Railing is a 1968 performance (with spoken introduction) by Harry Partch himself. It’s essentially an atonal guitar piece as performed here with a combination speech-song presentations of the real-life hitchhikers’ graffiti from Barstow, California. Several of them are quite funny, some are touching, a few bizarre.

Harry Partch was a musical experimenter who, oddly enough, had a solid grounding in early music. In his youth he had several in-depth conversations with members of the legendary Dolmetsch family, who were working on reviving pre-Renaissance music, and they were amazed at how much he knew of their field. But he was also quintessentially American, and his music, however odd it sounds, had a solid grounding in American roots music: folks songs by whites, blacks and American Indians, work chants, popular tunes and jazz. He was truly one of a kind, and the group PARTCH does a wonderful job of capturing both the letter and the spirit of his music.