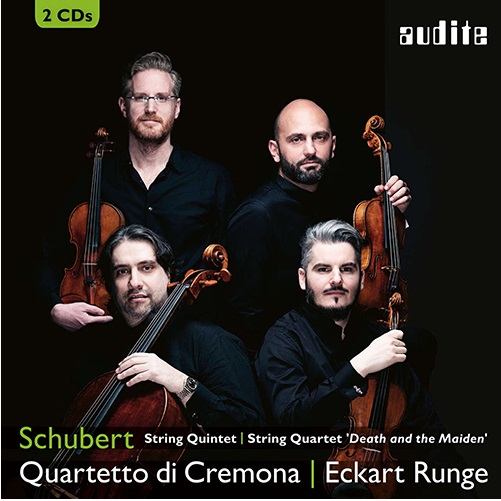 When I was very young, and first getting seriously into chamber music, one of the first pieces I heard was the Schubert String Quintet in a recording by the Vienna Konzerthaus Quartet (with Günther Weiss on second cello)—an LP, I’m sure, that has long since vanished under the waves of the multitudes of versions that have come out since. (It was on the Westminster label, originally issued in 1950, but the copy I had was a later reissue with a different cover.) Despite what I have come to accept as gross sentimentality in their playing (aptly described by Nicholas Rast on the Classical Music.com website) appealed to my younger self, largely because, in this one piece at least, I could “feel” the ebb and flow of the music logically being performed this way. The second recording I heard was exactly the opposite: the 1964 RCA recording issued as part of the Heifetz-Piatagorsky Concerts series. The lineup was Jascha Heifetz and Israel Baker, violins; William Primrose, viola; and Gregor Piatagorsky and Gabor Rejto, cellists. I was utterly thrilled by the third and fourth movements, which I immediately recognized as superior to the Konzerthaus Quartet’s versions, but had problems with the first two movements—particularly the second, which was so achingly beautiful in that older recording that it brought me to tears.

Years passed, and I tried a few other recordings of this monumental quintet, but the only that really satisfied me was on ASV by the Lindsay String Quartet with Douglas Cummings as second cellist. For me, this performance had everything: brisk tempi when you wanted them, a bit of pullback and gemütlich when the music called for it (the second movement), and an emotional pull that neither the Heifetz nor the Alban Berg Quartet’s 1982 version on EMI could do for me. From that day to this, it has been the standard against which I judge every performance of this work.

So now we have this new version by the highly prized, and praised, Quartetto di Cremona, who bring an Italian rather than a British or Austrian sensibility to the music. And how is it?

In the first movement, simply wonderful. Not quite as much gemutlich in the opening of the first movement as the Lindsay Quartet has, but surely more than enough give-and-take in those difficult little interstices between phrases, or in the middle of phrases, that for me are vitally important to project this music properly. In addition, they have a typically Italianate string sound: brighter, more open, less creamy or thick than the Lindsay Quartet. Well, in this case it is clearly a matter of taste, but conductors like Toscanini, Rodzinski and Mitropoulos proved long ago that Schubert symphonies don’t need that heavier string sound in order to be valid, and I can say the same thing about Quartetto di Cremona’s performance here.

But what of the crucial second movement? Not quite as slow as the Lindsay performance, which is nearly three minutes longer than this one, and there is more of a feeling of forward momentum here, less a feeling of the music being suspended in time (though they do achieve this around the 4:30 mark quite well), yet miraculously they bring just as much feeling to the music and, as the performance continued, I found myself admiring the fact that these very gifted musicians could give me both that sad, elegiac feeling that the Konzerthaus and Lindsay Quartets did while binding the structure of the music together more tightly. Moreover, if Quartetto di Cremona takes it a little quicker, one could argue that the Lindsay Quartet took it too slowly. According to an article on ThoughtCo.com, the proper tempo for an adagio is between quarter=66 to 76. Lindsay takes the slow section much slower than this, at quarter=58, which is more like the tempo of a “Larghetto” (55-60 beats per minute), while Cremona takes it at quarter=73, which is correct for an “Adagio.” The Heifetz-Piatagorsky version, to my ears, had absolutely no real feeling for this movement at all, nor did the Alban Berg Quartet recording (which everyone else seems to love but I don’t). When the agitated middle section appeared, it seemed to me a bit less powerful than Lindsay’s, but not much. Let’s say that the Quartetto di Cremona internalizes the angst of this passage a bit more than Lindsay, who (I feel) properly saw it as an explosion of grief that is almost uncontrollable, and yet the Cremona Quartet does build to some very strong climaxes when needed. They also do an excellent job in using the silences in the score to mark the transition back to the “Adagio” theme, now played with variations, and here they really do play it with sympathy and deep feeling. I was quite impressed overall. They are, as the phrase goes, “honest musicians” who adhere to the score but not machines. And yes, their performance of the second half of this movement brought me to tears. When it’s played well, it always does.

After this emotional roller-coaster, the last two movements are almost like fun rides in an amusement park, yet much to my surprise the two cellists laid into the opening of the “Scherzo” with almost the kind of rich sound and accent one traditionally heard, and hears, from German chamber groups. I really appreciated this, as I’ve always felt that this music really needs a strong kickoff in order to make a proper impact—something that neither Heifetz-Piatagorsky nor the Berg Quartet did, playing it too lightly and glibly. And I have another reason for liking it played this way: it gives us a contrast to the “Allegretto” finale. If you take the tempo of the scherzo too quickly, the two movements tend to sound too much alike (as in the Heifetz-Piatagorsky recording), and in this movement Schubert reverses the pattern of the second movement, giving us a trio theme that is much slower and has great feeling. To my mind, the Cremona Quartet pulls this trick off even better than the Lindsay Quartet. They make you suddenly realize that this movement, for all its gaiety, is still connected to that second movement you just heard, and this is the first time, I think, that I ever really realized how Schubert linked these two movements together in this manner.

But the Quartetto di Cremona has more surprises in store for us in the last movement. Here, taken at a slightly slower tempo than the Lindsay recording, they extract and bring out much more detail in the music—almost like seeing the music in 3-D. And in case you’re wondering, no, there are no metronome markings in the score. Unlike Beethoven, Schubert didn’t like using metronomes, which in his time were sometimes unreliable (and tended to run a bit slow, which meant that following the exact M.M. nowadays often made the music sound too fast).

In their performance of the “Death and the Maiden” quartet they take a similar approach to that in the quintet, combining somewhat brisk tempi with strong accents, a bit of rubato here and there when they felt them appropriate, and good structure. Oddly enough, my favorite recording of this work dates from way back around 1927-28, an early electrical version by the now-forgotten (but once highly revered) Capet Quartet, who oddly enough combined straight tone playing, which is now considered right and proper in Romantic music (but, to my ears, not always) with brisk tempi and incredible intensity. Quartetto di Cremona doesn’t quite match them in the quickness of tempi, but they are surely fast enough to please the score-minded yet provide enough moments of rubato and rallentando to satisfy those who want their Schubert to sound a bit more Austrian than purely German—note, for instance, the slightly slower tempo they take for the coda of the first movement.

Once again, they approach the second movement with a good feeling for mystery, opening with a pale, almost ghostly tone on their instruments, yet without dragging the pace as too many quartets do. After all, this is not the same as performing the song, where the fast opening section by the maiden contrasts dramatically with the slow, sepulchral answer given by Death. All this is is an instrumental use of the second theme in a sting quartet arrangement on which a serious of variations are played. As both Leonard Bernstein and Arturo Toscanini said, music isn’t “about” anything. It’s only about notes. If there’s a story attached to it, fine, but the music is an end in itself, and those who love the song for itself will be baffled and probably bored by the lengthy variations anyway. The ensuing “Scherzo” and “Presto” go along brilliantly. I really loved this performance.

The back cover inlay of this set makes a big deal out of the fact that these performances were recording on the Paganini Quartet’s set of Stradivarius instruments for the first time. I guess that’s a nice touch for those who care, but I’m less interested in the instruments used than the final musical result, and thankfully these are performances that have both excitement and warmth. The recorded sound is also remarkable, clear and forward with just the right amount of light natural room reverb to make them sound as if they were playing in your living room. An absolutely outstanding release.