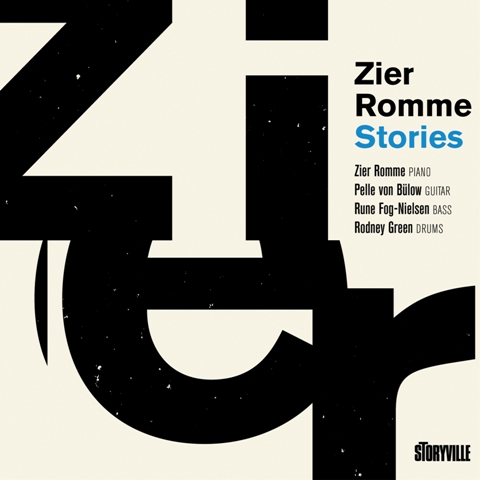 Pianist Zier Romme is described in the publicity release for this disc as “one of tomorrow’s Danish jazz stars,” so apparently his time has not yet come, but I’m going to review his CD now instead of tomorrow anyway!

Romme may indeed be a jazz star of tomorrow, but his style is decidedly retro. The opening selection, Duke Pearson’s New Girl, sounds like a cross between the George Shearing group of the early ‘50s and simplified Oscar Peterson. Of course, there’s nothing wrong with that, and for all my readers who know how much I hate “soft” jazz guitarists, I’m very pleased to tell you that Pelle von Bülow is not one of them. Except on ballads like Tell Me a Bedtime Story, he plays with a gutsiness that reminded me of Charlie Byrd or Barney Kessel, and—at least to my ears—it sounds much of the time like an early electric guitar, the kind that had more of the sound of steel in the strings or even the kind of pre-Fender microphone pickups they had in the very early 1950s. I like that kind of sound, a lot.

And, indeed, von Bülow plays the opening solo chorus on Tell Me a Bedtime Story, and a fine one it is, too—in fact, even more inventive that Romme’s meandering contribution in his first solo. I wonder if the guitarist is in some way related to the famous classical music von Bülow family of the 19th century? It’s not really that common of a name in Germany or Austria. Romme’s second solo is more interesting but, again, somewhat circumspect in its range and expression.

The band assumes a really nice, laid-back tempo and feel on Empty Pockets, and again the crisp, clean and inventive lines of von Bülow are a delight. Romme’s solo on this one is bluesy and fairly interesting. Drummer Rodney Green has a brief (2-bar) solo in this one as well, and can be heard supporting the others very well otherwise.

As the CD continues, however, it becomes more and more apparent that von Bülow is the real star of this show. Yes, Romme can play the piano quite well, but he’s not as interesting or as consistently inventive as the guitarist, thus one really misses him when he sits out Watch Your Step. With that being said, Romme does play surprisingly well on Chick Corea’s Tones for Joan’s Bones and in their very fast-paced rendition of Irving Berlin’s Watch Your Step he gives us a little taste of Oscar Peterson in a splendid single-note solo. Thad Jones’ Quietude makes for a nice finish, again with von Bülow’s excellent guitar in the spotlight.

Kind of an odd review, I know; I liked one of the sidemen better than the leader. But if you’re a lover of really good jazz guitar, as I am, you need to hear this disc for von Bülow’s playing.