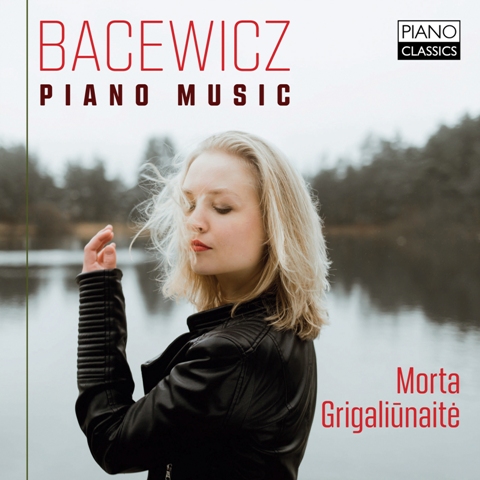 Grażyna Bacewicz (1909-1969) was, according to the liner notes, “one of the most recognized and influential Polish composers of the 20th century…After World War II, she took up a teaching position at the State Conservatoire of Music in Łódź, allowing composition to become her primary focus. Many international awards and commissions followed. In 1954, she sustained serious injuries in a car accident, forcing her to resign from her official duties, and directing her attention entirely to new works. She died of a heart attack in 1969 in Warsaw.” But she is not well known in the West. Lithuanian pianist Morta Gringaliūnaite pays homage to her in this new release of her piano music.

The music immediately grabs the ear from the very first notes of the Little Triptych, powerful, stark and atonal, yet as the brief (2:39) suite continues one is also aware of Bacewicz’ strong sense of direction and structure. The music sounds very much in the mold of Berg, but there is a stronger forward rhythm in the pieces that mark it as different from the normal output of the New Vienna School.

Bacewicz’ individuality shines especially well in the six-minute Concert Krakowiak. For those unfamiliar with Polish culture, the Krakowiak is the dance of choice for many of that country’s showcase dance groups. Originating in Krakow, the country’s old capital, it includes a variety of group figures, in addition to the turns, jumps, running and stamping steps. All of this is included in Bacewicz’ witty and imaginative composition despite the bitonal or atonal harmonic base. Gringaliūnaite’s technique here is simply astonishing, allowing her to play rapid running figures at full volume in the left hand while still being able to negotiate flying figures in the right.

Nor did Bacewicz pander to popular tastes, or “easy listening,” in her Children’s Suite despite the easy, loping rhythm of some of the pieces in it. Even in the simplest of them, such as the March, Waltz, Lullaby and Minuet, there are curious twists and turns of harmony that mark them as quite sophisticated pieces, closer related to Bartók than to Schumann’s Kinderszenen.

The 2 Études also sound deceptively simple, particularly No. 1 which is somewhat slow, dreamy, and more tonal than the earlier pieces on this CD, but again they are well-written pieces. By contrast, the 10 Concert Études are very fast, complex and technically difficult pieces, which Gringaliūnaite again plays with astonishing technical facility and a fluid style. The first, in particular, is practically a moto perpetuo with jagged rhythms played by both hands in an almost contrary motion—a real finger-killer—but the second, with its running single-note bass line and tricky scale passages in the right, is no walk in the park, either, and several of the others are equally challenging, particularly No. 7, “Giocoso,” with its running figures in opposite directions between the two hands. No. 8, simply marked “MM=69,” is the slowest, softest and most atmospheric.

By contrast, the 3 Characteristic Pieces are exceptionally playful, a bit tricky in spots but geared more for enjoyable listening—except for No. 3, “Vivace,” which is closer in style to the concert études.

Interestingly, the Piano Sonata No. 2 begins as if in the middle of a movement, in a medium-tempo, conversational style before picking up the pace and moving into tricky, fast-moving passages. Yet the overall feel of the music is more in the nature of a fantasia or a suite rather than a piano sonata. After a full pause that sounds like the end of the movement, we hear a slow but harmonically dense slow section—again, like a fantasia. The music also seems to ramble at its own pace, yet underneath one senses Bacewicz’ fine sense of structure.

The quirky, rapid last movement opens with upward-rising chromatic figures; then, after a pause and a chord, resumes its rapid movement, this time in single notes played by both hands, again with quirky and unexpected pauses in the music.

I’ve noticed that pianist Krystian Zimerman has also recorded this sonata, along with the Piano Quintets 1 & 2, for Deutsche Grammophon several years ago, but so far as I can tell some of these works (the Little Triptych, Concert Krakowiak and Concert Études) are receiving their first exposure here. An outstanding album, highly recommended.