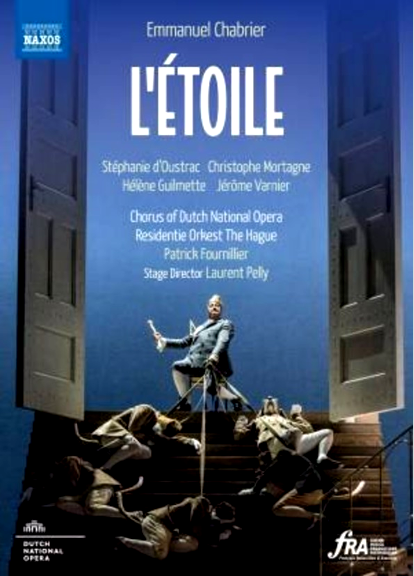 Way back on August 28, 2016, the first year of this blog, I wrote a fairly extensive article on L’Étoile, describing not only its gestation, influence and wild popularity during its time but also giving a full plot synopsis and decrying the fact that there was no good recording of the opera then available as either a CD or DVD. But I did praise a video uploaded online of a performance by the Dutch National Opera in October 2014—the very same performance now released, five years later, on DVD by Naxos.

Since I covered the work and this performance in so much detail, and even uploaded a complete libretto, a version in French and an English translation that I did myself, I’m in a quandary as to where to go here. And for those of you who have read my two articles on Regietheater, and thus know my hatred for the majority of such productions, you may also recall that I praised several imaginative stagings, particularly of comic operas. So this is where I will spend the majority of time in this review, discussing the singing and the staging in detail.

But first, I must give some plaudits to Naxos for issuing this. It’s not easy to release a five-year-old performance of an opera that, no matter how excellent, is not a repertoire staple despite the fact that there have been a few other productions elsewhere since (at least one of them, which is also available on YouTube, with far inferior singers in most of the major roles), so I give them a big round of applause (metaphorically speaking of course).

As one can see from the screen shots of the YouTube upload of this production that I put in my original article, stage director Laurent Pelly and set designer Chantal Thomas have updated the opera a bit, but some features stipulated in the original libretto remain the same, particularly the fact that the luckless peddler Lazuli (a trouser role for mezzo) travels around in a portable stall (pulled by a bicycle) to sell his wares. This was a stroke of good sense on the part of Pelly and Thomas since, without the portable stall full of dollar-store wares, Lazuli’s aria (and some of the plot devices) simply wouldn’t work. Ouf the First, a forerunner of Alfred Jarry’s Ubu Roi, is made up with a French version of Groucho Marx’s greasepaint eyebrows and mustache, the latter turned up at the corners in the Gallic manner. He also wears a skinhead wig to which is attached a ridiculous-looking little crown to remind everyone that he’s the king. The court astrologer Siroco looks like a character out of Monty Python’s Flying Circus, sometimes riding around on a huge rolling ball or some other contraption. This is a lot of fun without unduly ruining the character. Prince Hérisson the Porcupine and his contingent—Princess Laoula who is engaged to marry King Ouf, and her attendants Aloés and Tapioca—ride around in a little RV camper posing as traveling salespeople. This, too, adds to the fun without going too far in the direction of stage idiocy.

The only solo singer who evinces any vocal problems is Stéphanie d’Oustrac (the niece of composer Francis Poulenc) as Lazuli. She possesses a nice timbre, but there is occasional strain at full volume and a slow beat on sustained notes. It’s not enough to ruin the performance—I’ve seen videos online of d’Oustrac in which she sounds far worse—and she’s clearly a fine stage actress, able to inject life into the character without that awful hamminess that afflicts too many opera singers nowadays, and she even walks like a young man (a rare talent), but I’d have preferred someone without those slight defects, although she does warm up some by the time of her scene with Ouf the First, late in Act 1.

A real transformation: Stephanie d’Oustrac in her concert dress, left, and as the young male peddler Lazuli in “L’Etoile.”

Character tenor Christophe Mortagne seems to have made a specialty of Ouf, as he is in another performance of the opera online in that role. He has a wonderful light voice which he can lighten even further to provide very funny semi-parlando singing to delineate his character and he, too, is a fine stage actor. In the midst of announcing Lazuli’s execution, he does a little Charlie Chaplin-like dance which is unexpected but delightful. But this is just one of many examples, the others being his handling of ensembles and crowd scenes, that illustrates what an excellent stage director Laurent Pelly is. Would that all Regietheater directors had his good sense and keen eye for using space! The only small complainta I had in the entire opera were of Pelly, who also acted as costume designer, dressing the chorus at the beginning of Act II in giant pink cotton candy balls or pompons and having Ouf’s attendants dressed as giant dogs. They just looked ridiculous without being funny.

Yet what really pulls this performance together is Patrick Fournillier’s masterful conducting. Quicker, sprier and more light-footed than Ernest Ansermet on the legendary 1941 broadcast of highlights from the opera that brought it to the attention of Igor Stravinsky (who called it “a little masterpiece”), he delights in the score’s wit and delicacy. Chabrier’s music here is entirely different from most of his other work, particularly from his other popular opera, Le Roi malgré lui. And it’s not just greater delicacy and transparency of scoring, although that is immediately noticeable. It’s the whole way in which the music is constructed; different phrases within scenes almost sound like they don’t belong together. The music seems cobbled together of little phrases and snippets, yet somehow Chabrier made them fit like different parts and sticks in a Tinkertoy set. Listen, for instance, to the duet and trio for Aloés, Laoula and later Lazuli, “Il faut le chatouiller” in Act I. Believe it or not, the music of this opera is even better than that of Béatrice et Bénédict, which Berlioz wrote in something of a hurry when a cranky old man. Yes, there are some marvelous moments in the Berlioz opera, but the Chabrier just sparkles from start to finish in its own delicate, light-footed way.

Of course, the Offenbach lover will not respond very well to L’Étoile. Not only is the music not consistently ebullient in the French comic opera tradition, it’s mostly light and delicate and the few arias in it are constructed more like art songs. Yet it is that very delicacy and consistent ingenuity in Chabrier’s vocal and instrumental writing that makes it a gem.

As a visual representation of the opera, this performance is the best we’ll probably get for some time. As a musical performance it’s very good with the sole exception of some of d’Oustrac’s lapses, but I don’t see Susan Graham, Kate Aldrich or Joyce di Donato rushing to record it.