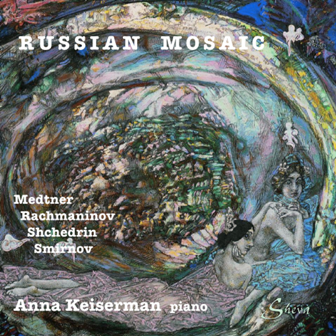 This, pianist Anna Keiserman’s debut CD, is described as a collection of “rarely heard treasures by Rachmaninov, Shchedrin, Smirnov and Medtner.” And clearly, some of these are rarely-heard works, particularly the early Medtner sonata and the Shchedrin pieces. I don’t know enough of Grigory Smirnov’s work to say whether or not his Elegy is a rarity and, since I almost never listen to Rachmaninov except for his songs, I can’t say that I know the Études-tableaux.

But Keiserman is clearly an interesting and exciting pianist and, as it turns out, these Rachmaninov etudes are Russian folk-inspired, fun pieces to listen to. Rachmaninov was at his best when he wrote works like these, and Keiserman alternates energetic playing in the fast passages with smoldering intensity in the slower ones. Indeed, the second etude in C almost sounds as if it could have been one of his songs. Interestingly, according to the liner notes, Respighi orchestrated five of the eight pieces for the Boston Symphony Orchestra, a rare compliment from an Italian composer to a Russian. The third etude is interesting in that some of it was invoked as the theme of his fourth Piano Concerto, but this is the composer at his least interesting, producing a vapid, uninteresting theme whose only value is to sound pretty.

By contrast, the fourth etude in D minor, based on an old Russian folk song, is one of his best with its odd hesitations in the musical progression and short, staccato  two-note figures played in the right hand, and the fifth in Eb minor bears a certain resemblance to Chopin’s “Winter Wind” etude in its flurries of notes. I particularly liked the last etude in C# minor for its sad, smoldering theme, again using a judicious amount of short pauses and the growing intensity of the music during its development.

The musical quality takes a distinct move upward with the arrival of the Medtner sonata. Like Rachmaninov, Medtner wrote in an essentially tonal style and used Russian themes as the basis for his works, but he also had a stronger sense of construction and purpose to his music which lifted it higher on the plane of art. Rachmaninov admired Medtner to a very high degree and in fact arranged to have him play numerous concerts in the West once he defected from the Soviet Union, but the latter didn’t understand that you had to please the public by including popular works by well-known composers. He stacked his recitals with his own music, which was a bit too dense for his audiences, and ended up a pauper, living in England. Yet this tightly-written one-movement sonata shows just how good a composer he really was, and Keiserman plays it with great feeling and affection. One example among many of Medtner’s prowess is the brief transition theme at the 6:40 mark. Rachmaninov would probably have milked such a theme for its lyrical value, extending it considerably, whereas for Medtner it was simply a way for him to bridge the themes preceding and following it. This work is certainly not one of his strongest, yet it is good enough to show how his mind worked.

Shchedrin’s pieces are typical of his quirky bitonal approach, fusing this aesthetic with a Russian sensibility. À la Albeniz is quirky in its stop-start rhythm and a “sort of” Spanish-sounding theme while Troika gives you his own take on this popular Russian sleigh ride, full of restless rhythms and bitonal chords. These are clearly not major works, but they are certainly interesting ones. The two pieces, titled “Two-Part Invention” and “Basso Ostinato,” are also not major pieces but interesting in a Prokofiev sort of way, the second in particular having a sort of feeling of garden gnomes coming to life and stalking one in the garden.

Smirnov’s Elegy, as it turns out, is a simple, tonal, melodic piece reminiscent of late 19th-century salon music. It struck me as the weakest piece on the CD, which is a shame since it was chosen as the closer.

My sole caveat about Keiserman’s playing is that, at times, she seemed to me a bit over-cautious in her approach. At the three-minute mark in “Basso Ostinato,” for instance, there is a passage that just cried out for a bit of juicy energy, but she played it fairly poker-faced. Otherwise, she has excellent musical instincts and for the most part I enjoyed her program.