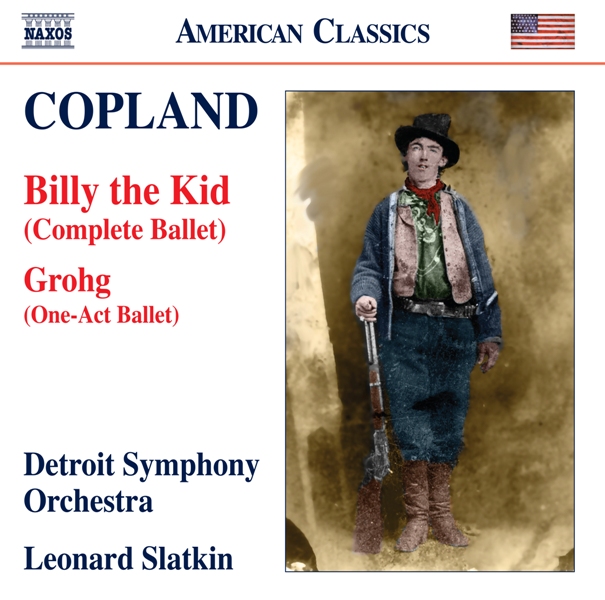 Well, now here’s something, as Monty Python used to say, completely different: an early, one-act ballet by Aaron Copland in his earlier, more adventurous style, based on the silent German horror film Nosferatu. The original title was The Necromancer, but somehow or other it became Grohg, and very Grohg-like it is: full of spiky Stravinskian harmonies while still filled with lyrical episodes that Copland would later “straighten out” harmonically and turn into his “Americana” style.

As Copland said, the music was meant to be “fantastic rather than ghastly,” which is why, I’m sure, he chose not to name it after the (rather) creepy German film he had seen. (By the way: for decades it was claimed by horror film fans that the actor who played Nosferatu, Max Schreck or “Max Shriek” in English, was a pseudonym and that no such German actor actually existed; some more hyper-imaginative viewers even claimed that the actor who played the title role was a REAL vampire; but as it turned out, Schreck was a real German actor, and other films by him have turned up.) Already at age 25, young Copland was quite obviously on his way to becoming an excellent composer. This is music that really develops from scene to scene and is not just episodic. He also uses a number of unusual timbral blends, also borrowed from Stravinsky (check out the “Dance of the Adolescent” with its bizarre xylophone passages) but in some places sounding more like Berlioz. In “Dance of the Opium-Eater,” Copland channels early jazz, and it is to Leonard Slatkin’s credit that he is able to bring out this feeling in a fully idiomatic manner, leaning into the syncopations in a fully American manner. You might say that it sounds like a far more sophisticated relative of Gershwin’s Rhapsody in Blue: the parent to the child.

“Dance of the Streetwalker” emerges as a fast, quirky waltz, as if said streetwalker were both high and drunk. It also becomes more agitated, and less waltz-y, as it goes along. Polyrhythms galore show up in “Grohg imagines the dead are mocking him,” one of those sections that sounds strongly influenced by Berlioz except for the highly syncopated backbeats.

Following this, we get the complete Billy the Kid ballet of 1938 in Copland’s then-new American style. You can tell from the opening that this is the same composer, but one whose earlier modernistic tendencies are tamed, channeled more into tonality and, although interesting, less adventurous. There are still some surprises in the music but it’s not going to be banned from your local classical music radio station the way Grohg will be (I guarantee you will never hear Grohg in WQXR or WGUC). By the time we reach the third section, “Street in a Frontier Town,” we’re in jolly-land, replete with “Western”-styled melodies set to rhythms that only trained balletic cowpokes could dance to. But as in the case of Grohg, Slatkin conducts the music with vim and vigor. I met him once at the Aspen Music Festival in 1979 and had a wonderful conversation with him; he’s an amazingly gregarious and cheerful person who loves the music he conducts and approaches everything with enthusiasm. It’s heartening to hear, on this recording, that he hasn’t changed a bit in that respect in all that time (but then again, neither have I!).

In fact, in re-listening to this ballet complete—something I haven’t done in decades—I’d have to say that it’s actually much better-written than its successor, Rodeo. Copland was still not 100% committed to producing easily-accessible tunes based more on pop and folk styles, thus his themes, though simpler than those in Grohg, are still quite original and not nearly as predictable as in Rodeo (or Appalachian Spring, an all-time favorite of the classical music radio crowd). The score is also more continuously developed, which makes for much more interesting listening. One might compare this to Tchaikovsky’s Swan Lake as opposed to his Sleeping Beauty (The Nutcracker is a combination of continuous and episodic music).

And, as I say, Slatkin pulls all the stops out, and for once Naxos has given him sound quality that enhances the performance: crisp, clear and forward rather than overloaded with reverb and echo. The end result is a simply dazzling performance that, for me, goes straight to the top of recordings of this work. Absolutely nothing is played without heart and energy, no details are glossed over, and end result is a very impressive achievement. Slatkin even manages to suggest a jazz swagger in “Celebration” (which, at the 1:10 mark, includes a theme that sounds a bit like the 1931 popular song When Yuba Plays the Rumba on the Tuba) and in Bravo, Lenny!

No two ways about it, this new release is a real “find” for Copland fanciers. Highly recommended.

Leave a Reply to The Art Music Lounge Cancel reply