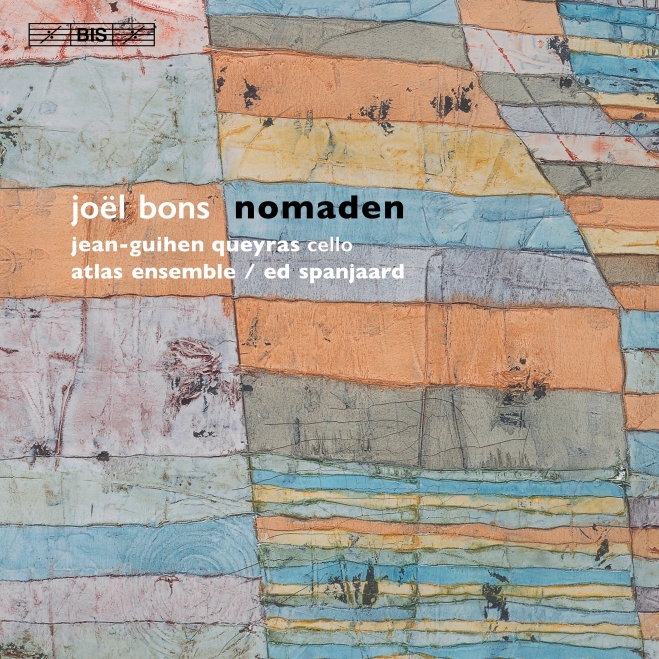 Fasten your seat belts, folks: this is something completely different, a suite in 38 short parts for solo cello and a “large intercultural ensemble,” the latter sporting such instruments as tabla, tar, erhu, shakuhachi, duduk and sitar, sort of a combination of the Silk Road and the Pacific Orient. Composer Joël Bons describes this work as “like a journey during which the protagonist – cellist Jean-Guihen Queyras – ‘meets’ musicians from different traditions and enters into dialogue with them. It is not a cello concerto as such, but rather a concertante work for cello and soloists from other cultures.”

It is also a brilliantly conceived piece of music, with the cello playing both lyrical passages and short, querulous phrases. You might call it an ear-opening experience that combines the lyrical with the dramatically effective. It is most certainly a different kind of animal, yet emotionally moving as well as superbly crafted. It was written for Jean-Guilhen Queyras, the soloist here, and the Atlas Ensemble, which Bons himself founded in 2002 of musicians from China, Japan, Central Asia, the Middle East and Europe. The piece was given the Grawerneyer Award (about as prestigious as the Scherman-Peabody Award that this blog has received) in 2019.

Some of the music fits into the category of “ambient” but does not linger in that style. In the eighth piece, titled “Erhungi,” the solo cellist plays rapid figures against the bright backdrop of the ensemble with a jazzy swagger that takes one by surprise while the tenth piece, titled “Duel,” has a decidedly Stravinskian feel to it. Due to the nature of the ensemble, which contains only three Western string instruments (one each violin, viola and bass) but a preponderance of bright-timbred Oriental and Middle Eastern ones as well as a group of woodwinds (Flute, piccolo, English horn, oboe, clarinet, bass clarinet and alto recorder) and percussion, the timbre is exceptionally brilliant without a shred of Romantic warmth, which is exactly what Bons was after. The full orchestra only plays all together on rare occasions, as in the closing moments of the lively 11th piece, “Azertet”; most of the time, they play in small sections. Sometimes the exotic instruments also get short solos to play, which adds to the color (one of the longest being part 18 for the erhu). All in all, it’s a fascinating piece, due in no small measure to the fact that Bons is really a composer and not just a compiler of “effects” as so many of his modern classical brethren are.

Part 15, apparently titled “13/8” because that’s the time signature, has a combined Middle Eastern and jazz feel to it, not unlike some of the pioneering Middle Eastern-jazz fusion pieces of the underrated Rabih Abou-Khalil (composer of the now-famous Arabian Waltz and many other, even more interesting, works). In part 21, enigmatically titled “M,” Bons combines a surprisingly catchy theme with his bevy of exotic instruments and percussion, which leads without a break into “Sarangi” with its combination Eastern-jazz rhythms.

Yet in giving somewhat technical descriptions of these various portions of the suite one can miss the larger picture. I found it best to just sit back, relax, and let the whole piece run its course without trying too hard to be analytical. Although one can certainly do so, it serves little purpose and, I feel, interferes with one’s enjoyment of the music as a whole. For instance: even though the 25th section, “Sho, almost sounds like a piece from George Antheil’s Ballet Mécanique and part 37, “Shur-Segah” sounds like a snippet of Darius Milhaud’s La Creation du Monde, pointing this out misses the point that they are important links between what comes before and what follows. One can surely enjoy this music without being overly technical in describing it. There is yet another attractive, catchy melodic line in “Walkwalk” (No. 27) that Bons uses as the basis for a fugue; yet another detail that delights and entices the listener while still being part of the complete suite, just as one can hear one of the exotic instruments in this movement almost being like an American banjo. There is a lot of humor, albeit sometimes subtle, in this music along with the serious elements, such as the “Salsa” heard in part 31.

Nomaden is clearly one of the oddest, most eclectic yet ultimately fun modern pieces I’ve heard in some months, and the recorded sound is terrific. Highly recommended!