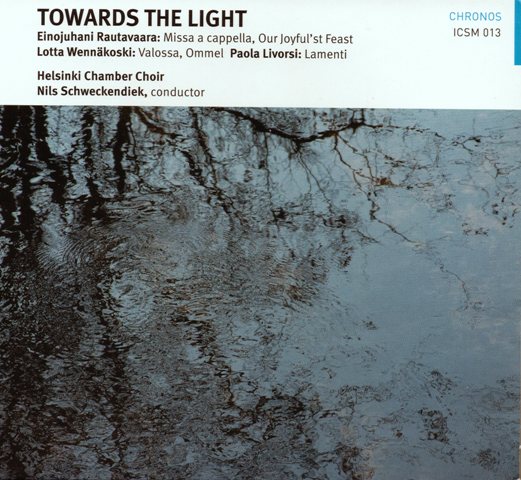 This is clearly not the kind of CD I like to review, or in fact review at all: an album of a cappella choral music, generally low-key and with religious allusions, but I generally admired the late Einojuhani Rautavaara whose works pretty much dominate this disc.

The opening Missa a cappella is typical of Rautavaara’s late period, using mixed rhythms and unusual harmonic shifts within a somewhat regular formal structure, and indeed these modern touches are what saves the music from banality. He originally planned to write his mass in the early 1970s, but it took him almost four decades to complete it: the Credo was already written. Rautavaara uses intriguing harmonic “traps” to move the key around, particularly in the Gloria, which always seems to end each chorus in a different key from where it started.

One of the things that strikes the listener, however, is that for Rautavaara the text didn’t seem to be much of a motivator in inspiring the music since it seems to have a mood of its own. True, he followed the rhythms of the Latin words, but played with them in an intriguing manner, sometimes shortening and sometimes lengthening the syllabic structure to fit the score. Only the Sanctus seems to be syllabically structured to fit the words as they would be spoken. The first tenor soloist in this, believe it or not, has a spread in his tone, so even in choral music we’re forced to put up with defective voices nowadays. He also used some nice polyphonic effects on the syllable “ah” during the Benedictus.

Next up is Valossa by the relatively young (b. 1970) Finnish composer Lotta Wennäkoski, whose music includes some really comical effects such as membe5rs of the chorus muttering and mumbling in the background as the others sing. Some of this goes a long way, and in this piece I felt as if Wennäkoski overdid it a bit, but it is an interesting piece in which the underlying harmonies seem to be ever-shifting using a circular chromatic pattern ã la John Coltrane.

Our joyful’st feast, set to verses by Shakespeare from Love’s Labour Lost and Hamlet plus two verses by George Wither, found Rautavaara in a playful mood, and here he wisely kept the music minimal in its use of unusual harmonies. Commissioned by this very choir, it is clearly a nice celebratory piece and not made for heavy listening, yet very uplifting to hear.

The strange-sounding Ommel returns us to the world of Wennäkoski and her swirling bitonal lines which here include some microtonal passages to make the listener pay attention. At one point, it almost sounds as if the chorus was shooting craps while they sang.

We end this recital with Lamenti by Italian composer Paula Livorsi, who wrote this piece using sad-sounding, chromatically-falling lines to emphasize the laments from Giordano Bruno and Federico Garcia Lorca. My sole complaint with this work is that it went on too long and was too repetitive.

Even so, this is surprisingly interesting music for this type of record. I highly recommend it for lovers of modern choral pieces.