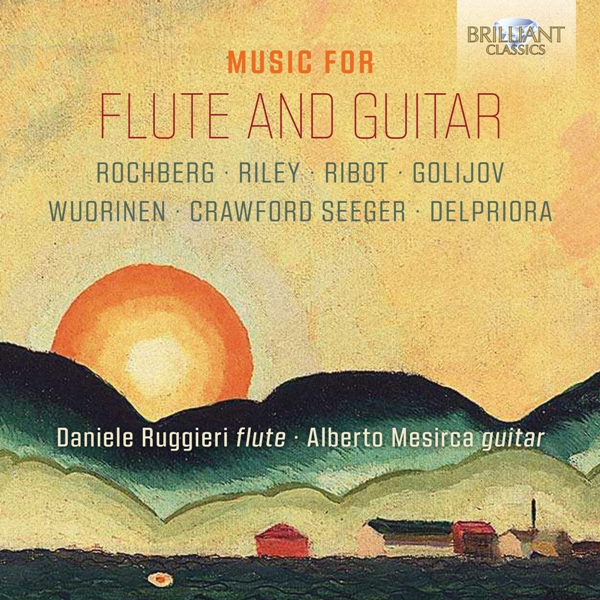 My readers know that I am not normally drawn to solo flute, solo guitar, or flute & guitar records as a rule unless the flautist and/or the guitarist play with some energy. This is sometimes the case with flautists but seldom with classical guitarists unless their names are Julian Bream or Pepe Romero, but here is an Italian guitarist, Alberto Mesirca, who plays with some energy for a change, and the program consists of mostly modern works.

First up is George Rochberg’s Muse of Fire, a fairly long piece (19 minutes) written in 1990. This is an atonal romp in shifting meter, yet still one that attempts to give the flute lyrical themes to play. Ruggieri, like Mesirca, plays with rhythmic acuity and energy, thus their joint performance is a joy to hear. Rochberg adds variety to the piece by changing the rhythms and tempi in addition to weaving other themes into it as it wends its way along.  And dig Mesirca’s sharply-played downward runs on the guitar…simply outstanding. The music then turns lyrical in this mini-suite, but even in the lyrical section there are interesting runs played by the guitarist against the more fluid flute line.

The same composer’s Ora Pro Nobis, subtitled “Nach Bach II,” was written by Rochberg a year earlier. Both works were written for guitarist Eliot Fisk around the time of the Gulf War, which apparently Rochberg was against on political grounds (despite the fact that, at that time, both of our major political parties voted for and supported it, so I’m not sure what Rochberg’s “political” stance was). The liner notes call it “an invocation for peace,” the music based on the theme of the second movement of Bach’s Italian Concerto. This is played in a gentler style, but still with interest by the two principals. The piece becomes more interesting, and more like Rochberg’s normal style, towards the end, particularly in the very interesting guitar solo.

Next come the Cantos Desiertos by seminal minimalist composer Terry Riley who, in my estimation, is and was the best composer in that often restrictive style because his music actually developed and didn’t remain static. Mostly written in Mexico and Hispanic in style, the music is also witty and ironic as well as attractive and tonal. The third movement, marked “Quijote,” is the whimsical. The fourth begins in a conventional, lyrical vein but turns edgy about halfway through and ends on an unresolved note while the fifth and last, “Tango Ladeado” or “Tango Off Center,” plays with the rhythm.

Even more interesting is the Bateau for Guitar by Marc Ribot, which begins in a conventionally lyrical vein but adds some dazzling single-note guitar runs as it moves along. Osvaldo Golijov’s Fish Tale combines Latin rhythms with unusual melodic lines over subtly shifting harmonies. Golijov also calls for the flautist to play with just the edge of the hole, producing soft, edgy tones while the guitar plays a rhythmic accompaniment. The fluid harmony continues to morph subtly throughout the piece. Towards the end, the flautist is called upon to hum the melody while playing the flute (the same notes in unison, not chording) over the guitar—a highly unusual yet lovely effect.

Charles Wuorinen’s Hexadactyl (2002) for solo guitar is, not surprisingly, the edgiest piece on the CD, written in his usual complex and somewhat unattractive style. The Diaphonic Suite for Flute is by Ruth Crawford Seeger who, along with her contemporary William Russell, were two of the greatest losses to contemporary classical music, both giving up their budding composing careers of interesting modern music in order to pursue lesser interests. In Russell’s case it was a mania to collect and record old-time New Orleans jazz musicians from the early years of the 20th century, while for Seeger it was to collect and anthologize old folk and bluegrass tunes. She did briefly return to composition in the last two years of her life, but sadly she died relatively young. This is as good an example of any of how interesting and original her music was: though modern, the flute lines are still lyrical and call for an almost superhuman breath control, which Ruggieri fortunately possesses.

We end this recital with a very lyrical piece, Elegia by Mark Delpriora, yet despite its lyricism it has some interesting twists in it.

Overall, then, a very interesting recital, well worth seeking out.