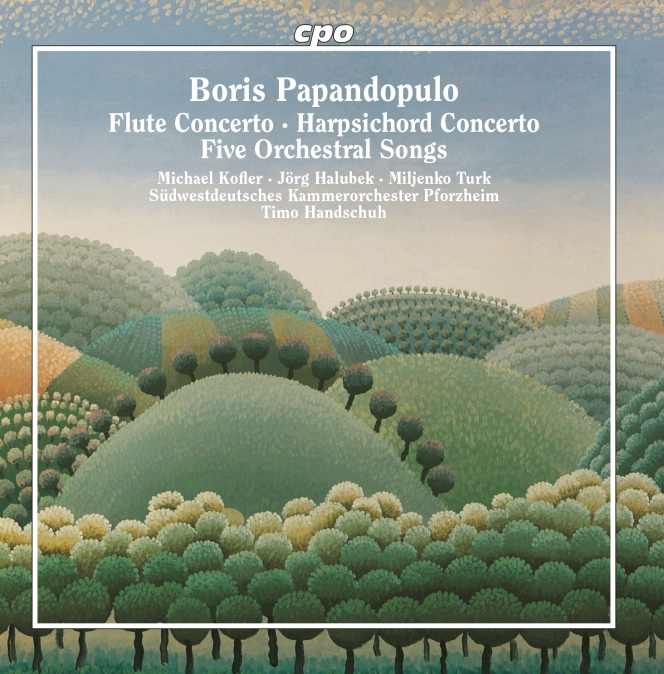 Having reviewed Ville Matvejeff’s excellent CPO album of Boris Papandopulo’s Third Symphony and Violin Concerto about a year and a half ago, I was eager to hear his concerti and orchestral songs. His music was tonal but not predictable, rhythmic in a folk-like way but not quite jazzy, yet all in all there was no other composer who remotely sounded like him.

The front cover of this new CD calls the first work a Flute Concerto, but that’s an error, possibly due to the fact that soloist Michael Martin Kofler plays a piccolo flute. No two ways about it, this is a piccolo concerto all the way, and Papandopulo had a ball writing fluttery, bird-like figures for it—if you can imagine a bird singing Eastern folk tunes that sound something like klezmer!

In the slow movement, Papandopulo wrote a surprisingly beautiful, long-lined melody for the soloist, not terribly easy for a piccolo-player to sustain. The third movement, in a rapid 3 (or perhaps 6/8) with alternating measures in 4, skips and jumps its way along with lively rhythmic tunes and motifs.

Surprisingly, the Harpsichord Concerto is much more bitonal, although using the instrument, technically speaking, in a traditional manner. It’s almost like listening to Bach or Handel starting to play their music, but somehow getting distracted by falling and rising chromatics and slipping down the rabbit-hole into Wonderland. In the second movement, Papandopulo came up with a very modern-sounding melody that, eerily, resembles Paul McCartney’s Yesterday. It does, however, also contain Eastern folk harmonies, and in this the harpsichord plays music that sounds nothing like its 18th-century repertoire. There’s even a slight touch of a jazz swagger in the way Jörg Halubek plays those little mordents in his solo section. As usual, the music is well-developed and the orchestral accompaniment has some nice scoring touches, including a pizzicato “walking” bass. In the third movement, Papandopulo gives us a lively tune in 3 with lots of chromatic movement and occasional key shifts, with the soloist playing rapid thirds along with crisp melodic lines while the orchestra jabs and pokes at him.

The five songs for baritone and orchestra are set to texts by Kurt Barthel, who was also known by the pen name KuBa. They vacillate between personal meditations and silly nonsense lyrics, the most surprising of which is a song titled “Rock ‘n’ Roll,” which refers to a top and not to the dance craze of the 1950s. Miljenko Turk has a pleasant timbre but his voice has an uneven vibrato on sustained notes (unfortunately, a defect all too prevalent nowadays). The music is, however, mostly written in short, brusque phrases, tonal but not terribly melodic in the conventional sense, and is quite interesting.

All in all, then, another fascinating album of music by Papandopulo!