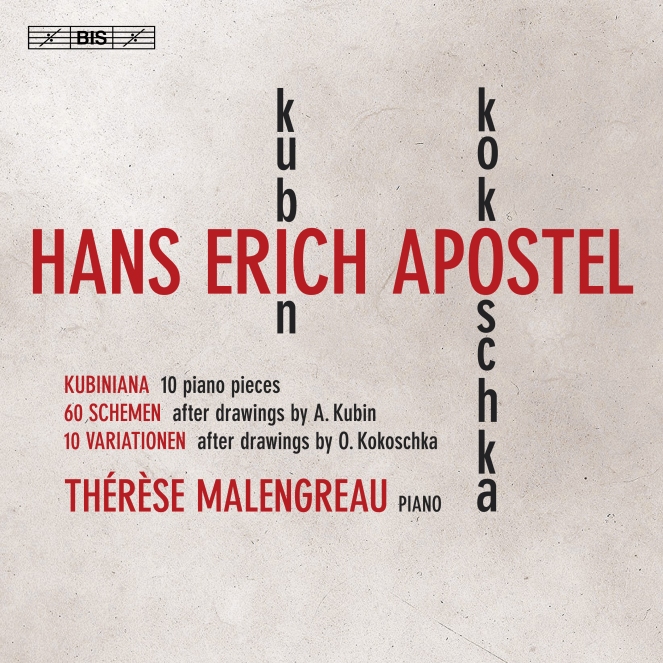 It has become an acceptable and fairly widespread fad in the classical music industry, since the late 1990s, to present albums of music by composers banned by the Nazis, but truth to tell, not all of them were great composers or even (in the case of Hanns Eisler) very good ones, yet a few of the resuscitated names have become welcome visitors in the concert hall after their revival. Tops among these are Erwin Schulhoff and Viktor Ullmann. I might also toss in the name of Franz Schreker, one of the first Jewish composers unceremoniously booted out of Germany, but his music never completely disappeared from the repertoire, in part because he was a really famous composer up to the point of his removal. 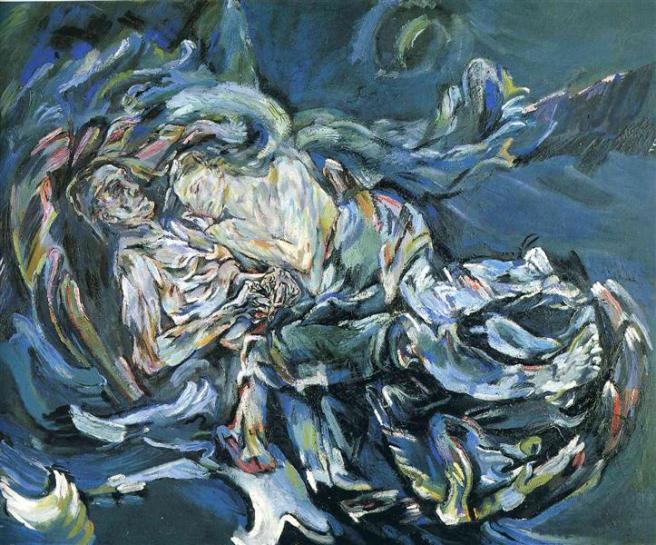 Hans Erich Apostel (1901-1972) was not as lucky. A devoted pupil of Arnold Schoenberg, he also studied with Alban Berg beginning in 1925, the year that Wozzeck premiered. As you can see from his dates, he survived the Holocaust, but his music never really caught on either pre- or post-war. The three works presented in this recital disc, of which the first and third are world premiere recordings, are tied to the visual art of Austrians Oskar Kokoschka and Alfred Kubin. Both considered themselves impressionists, but Kokoschka, who worked in oils and pencil sketches, was much more outré than Kubin, a painter and printmaker. In the notes, Malengreau points out that it must seem odd that a composer of “absolute music” based his work on visual art, but Apostel was proud of this association and enjoyed writing music based on their work.

“Camilla Swoboda” by Kokoschka, one of the group of pencil drawings that inspired the first work on this set

The 11 Variations on an Original Theme (1928), which Apostel sent to Kokoschka, only exists in manuscript form; Malengreau cannot trace any public performance of the work, yet states that Apostel considered it a major work since he gave it the honor of being numbered Op. 1 among his published pieces. The theme is quirky, with some atonal leanings and the use of modes, yet still essentially within the realm of tonality. The first variation uses rising and falling chromatics in the left hand which sometimes complement the variation and sometimes clash with it. It’s very interesting music, original and well-crafted, but although it shows some traces of the 12-tone school it is much more melodic than either Schoenberg or Berg. Indeed, it is not terribly different, harmonically or melodically, than the music of Schulhoff. Unlike his teachers, Apostel seems to have clung to a basic sense of rhythm, and this is the underlying basis of his musical aesthetic. Even within the bouncing, widely-spaced notes of the third variation, one hears an underlying rhythmic impetus of the sort that Schoenberg usually avoided and Berg did much, but not all, of the time. If one could imagine Apostel, for instance, writing Wozzeck and Lulu rather than Berg, one could hear in the mind a lyrical style with a more normal rhythmic flow. None of this is to detract from his originality as a composer, however; for all the little resemblances to Schulhoff, Apostel was still very much himself in his writing.

Of course, there’s also the chance that pianist Malengreau used a more lyrical style in her approach to his music as conductors Erich Kleiber did in Wozzeck and Jeffrey Tate did in Lulu. Their conceptions had a more lyrical and flowing style than the clipped, strophic sound we hear in most others’ performances—just as Schoenberg’s own recording of Pierrot Lunaire has not only a bit of lyricism to it but is less exact in the pitches spoken by the narrator. I think that we often  impose our own post-modern view on the revolutionary music of the 1920s, just as we do on the music of the 18th century via the historically-informed movement. Variations 5 and 8 are the darkest, harmonically densest and least lyrical of those in this series.

Two of the pictures from Kubin’s “Schemen: 60 Heads from Past Times”

As opposed to this almost unknown work, Kubiniana (1945) is probably Apostel’s best-known piece, having been premiered in 1946 and even recorded for Austrian radio. It is based on Kubin’s Sketches: 60 Heads from Past Times, which impressed the composer deeply. This is much starker and less lyrical music, very much in the Schoenberg-Berg mold, yet even within these sometimes rough-sounding pieces there is a more lyrical flow than we’re used to in such music. One might think of this piano suite as Apostel’s Pictures at an Exhibition without the Promenades. It was previously recorded for the Neos label by Peter Stadlen, for Centaur by Karl Steiner and by Darko Domitrovič for Nota Bene, none of which I have heard. One of the many things I liked about Malengreau’s playing, however, was that it is not soft-grained, but exploits the hard edges of the music without flinching. As she describes the music in the notes:

For the first sketch, inspired by Kubin’s self-portrait, Apostel adopts to the musical cypher employed by Bach, much favoured by Schumann and also used by Alban Berg. The musical ‘anagram’ of Alfred Kubin’s name – the notes A F E D B (B = B flat) –begins the set with a motif that is full of energy and played forte. Hans Erich Apostel’s anagram, represented by the notes H A Es E C H A Es E (H = B natural; Es = E flat), then follows in a descending pianissimo figure, modest, slightly hesitant and conscious that it is lagging behind. In just nine bars, Apostel then manages to weave these two motifs together contrapuntally and to exploit the oscillation between B and B flat – the notes that identify the two protagonists.

The last work presented here, Sechzig Schemen nach Zeichnungen von Alfred Kubin, was also inspired by Kubin sketches and actually begun in 1937, though Apostel would not complete the work until 1948-49. Interestingly, he gave the suite the opus number 13a whereas Kubiniana was Op. 13, so he clearly thought of these two works as having a close kinship to one another. The music is very much in the same style as its predecessor, so much so that it sounds like a continuation of Kubiniana, although the pieces are clearly different.

Whether or not the style heard here stems from Malengreau or Apostel himself, this is clearly excellent music, emotionally moving as well as intellectually fascinating. I would, then, place him on the high level of Schulhoff and Ullmann among the best “entrarte music” composers banned by the Nazis.