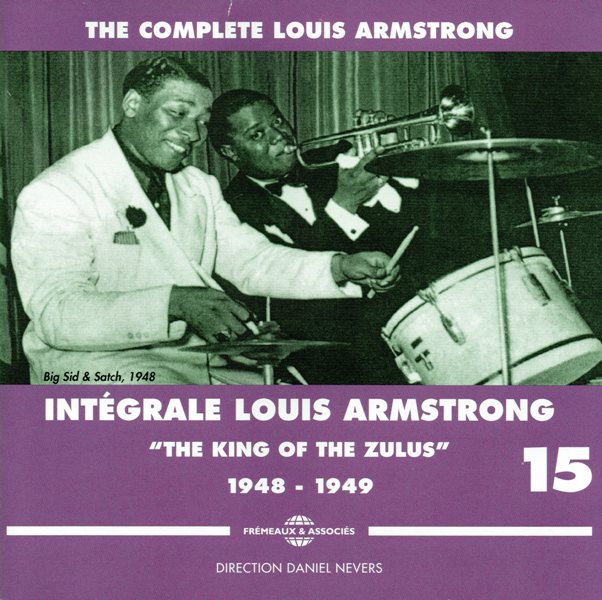 Frémeaux & Associés is a French label that issues a lot of older jazz and specializes in complete sets by major artists. They are probably most famous for their complete Django Reinhardt series, and here they are in the middle (chronologically speaking) of Louis Armstrong’s career. As in the case of the Reinhardt set, however, they do not stop with commercial recordings, but are zealous about issuing everything they can find of their particular favorite jazz artists.

With Armstrong, they may have bitten off a bit more than the CD-buying audience may wish to chew. Satchmo never stopped recording from his first dates with King Oliver’s Creole Jazz Band in 1923 until almost the day he died in 1971, and there is so much live material that it sometimes becomes mind-boggling. In addition, Armstrong is an artist who pretty much stopped growing artistically around 1941. Nearly all of his later recordings, a few pop tunes that he liked and some that were specifically written for him excepted (like Do You Know What it Means to Miss New Orleans and the later Now You Has Jazz), are of the same old same old. By the 1950s his repertoire had shrunk, not grown, to roughly three dozen songs, and even the occasional addition like Hello, Dolly in the 1960s did not sway him from the tried and true. He was very comfortable just being an entertainer who played good jazz solos, and that’s where he stayed from the mid-1940s on.

The attraction of this set, however, is the bevy of performances by his first All-Stars lineup with Jack Teagarden, Barney Bigard, Earl Hines and “Big Sid” Catlett, the best drummer Armstrong ever worked with. This period gives us the most comprehensive view of Armstrong’s interaction with pianist Hines and especially trombonist-vocalist Jack Teagarden. From their inception in late 1947 through1950, Louis’ little band was, for all intents and purposes, led by both musicians in almost the same sense that the Will Bradley-Ray McKinley big band was. Teagarden often said this was the happiest period of his career.

From the opening track, Kid Ory’s hoary old chestnut Muskrat Ramble, you can tell that the band is in fine fettle—indeed, they sound even livelier and more modern here than on their famous 2-LP Decca set of one of the band’s first live gigs, Satchmo at Symphony Hall (recorded November 30, 1947 with Dick Cary on piano before Hines joined). Hines, in particular, sounds as if Louis had let him off his leash, as he plays a spectacular opening and half-chorus of improvisation. Big T is also in great form, and Louis plays one of the finest solos (his first one) I’ve ever heard from him post-1937. He has full control of his horn here, sounding for all the world like he did in his greatest days. Frémeaux has also done a spectacular job of removing all the surface noise, hiss and crackle without damaging the sound too much; only the bass and drums sound muddy, and I never thought much of Arvell Shaw’s playing anyway. He was the one mediocre musician in this truly all-star group. Jack and Louis sing a wonderfully relaxed and spirited duet on Do You Know What It Means to Miss New Orleans?, and Teagarden’s solo is as good as anything he gave us from the 1920s or ‘30s. This was exactly what I liked about this early version of the All-Stars: they had a New Orleans small-band feel, but played contemporary songs in a relatively contemporary style (on Satchmo at Symphony Hall, Armstrong even played a quasi-bop number titled Mop Mop).

On I Cried for You we get the first of several vocals by Velma Middleton, whose voice and style Louis loved but most jazz critics found indifferent. Sometimes she used a loose vibrato that I didn’t care for, but as I mentioned in my review of Storyville’s excellent set of Armstrong in Scandinavia, I came to really like her because she had a nice, relaxed swing and a cheery way of playing off Louis (either on vocal or trumpet) that none of his other female singers on record (sadly, Midge Williams was never recorded with the Armstrong band when she sang with them) were able to do. The critics were probably put off by her size (she was immensely fat, and specialized in doing some rather grotesque fast, eccentric dances) moreso than by her voice. This track, sadly, is one of the muddiest in sound. Later on in the set, she does an excellent version of Little White Lies.

Hines plays a superb background improvisation behind Armstrong’s opening trumpet statement on I’m Confessin’, and continues in the same vein during his vocal. Louis’ trumpet solo on this is simply astounding. In Jelly Roll Morton’s Milenberg Joys, we can finally hear Sid Catlett on drums, crisp and clear, driving the band in his wonderfully loose-rhythmed way. Bigard has a nice solo on this one, as does the leader, but unfortunately Hines is pushed to the background and doesn’t sound very involved (well, Morton and Hines hated each other, anyway). This version of Lil Hardin Armstrong’s most famous composition, Struttin’ With Some Barbecue, is the most swinging version Louis ever recorded—even more swinging than his famous big-band version of the 1930s, and that one was pretty good as well. Hines takes a nice solo here but the microphone is a bit too far away from the keyboard to capture him properly. Bigard plays well, with Satch and Big T filling in with little riffs behind him, then come fine solos by both horns. Catlett is fairly audible on this one as well, kicking off the last chorus with a nice, slow press roll.

One could go on and on and on about every track on this set, but since I don’t want this to become a small book I’ll limit it to what I think were the highlights. Among them, a nice arrangement of Whispering with an almost calypso-like beat in the first chorus (and pretty good Shaw bass solos), a terrific Hines-Catlett duet on The One I Love Belongs to Somebody Else, an extremely lively version of Jack-Armstrong Blues (better than their RCA Victor recording), a stunning rendition of When the Saints Go Marchin’ In, great Jack T on Baby Won’t You Please Come Home (both trombone and vocal), a really loose, swinging Panama (the first version, on CD 2), a particularly loose and swinging S’posin, a surprisingly imaginative arrangement of Lazy River, the surprising (and rare for its time) trumpet-piano duet on Hines’ most famous song, Rosetta, and a real rarity, Armstrong playing King Porter Stomp. Hines gets a rare number all to himself on CD 3, playing Pale Moon with just the bass and drums, and an outstanding performance it is.

The live telecasts from 1948—the Ed Sullivan Show where Louis plays a really mixed-race band (with Peanuts Hucko on clarinet in place of Bigard) and the Eddie Condon Floor Show on WPIX—must have caused heart attacks in the South, particularly the former which had national distribution, but the music is wonderful, particularly in the former. Another surprise is the Bing Crosby radio show on which Armstrong and his band played with jazz violinist Joe Venuti. On this session, however, only Satchmo and Big T were present from the sextet; the other musicians were pianist Buddy Cole, guitarist Perry Botkin, bassist James Moore and Nick Fatool, an outstanding big-band drummer who had played with Benny Goodman. Their rhythm is tighter than Hines-Shaw-Catlett but not quite as swinging, yet it’s a rare treat to hear Venuti and Armstrong together, and Crosby joins Armstrong in a vocal duet on Lazy Bones. Being professionally recorded by ABC radio, the sound on these is quite clear. On the March 1949 broadcast from Los Angeles, however, Catlett and Hines are somewhat under-recorded.

No two ways about it, this volume of the complete Louis Armstrong is absolutely indispensable for any Armstrong fan. In addition to capturing his greatest sextet and showing him, for the last time, playing and singing a fairly large selection of contemporary tunes, his horn is in great shape and he really sounds inspired throughout most of these CDs—much more so than on his overrated early-‘50s Columbia albums, Satch Plays Fats and Satch Plays W.C. Handy. And despite the very different styles of the four principal soloists, they played off each other in a way that was almost uncanny. Yes, we got a little taste of this in a few of Armstrong’s late-1920s records with Hines and fewer yet with Teagarden, but this set is practically a Holy Grail of Louis Armstrong performing at his best with musicians who respected him and pushed him to greatness.