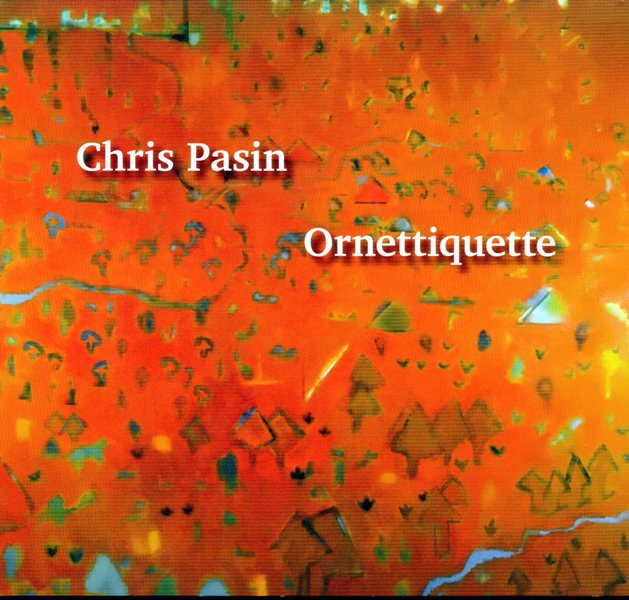 Chris Pasin is a New York-based trumpeter who is so infatuated by the late Ornette Coleman and his long-time musical partner, trumpeter Don Cherry, that he has named his band after him. This is his fourth album, but the first with his group Ornettiquette.

They do indeed play in a style very close to that of the original Coleman quartet (the one with Charlie Haden on bass and Ed Blackwell on drums, although Ornette quickly switched to another drummer). But to be honest, Pasin sounds more like Don Cherry than Adam Siegel sounds like Ornette. The latter is just too careful in his improvisations, lacking the adventure and enthusiasm of his model—an adventure and enthusiasm that Coleman retained into the mid-1990s when he made his “Sound Museum” CDs. Michael Bisio has some of Haden’s imagination but not his full tone or energy. The result is a group that does a fine job of paying tribute to the originals without quite catching up to them (Pasin excepted).

Of course, we’re talking about some of the most original and innovative musicians of their time. Now that Coleman is accepted as a jazz innovator and legend, we tend to forget how much he was reviled and hated by many famous jazz musicians when his quartet first hit the Five Spot in New York in the late 1950s. Roy Eldridge, Thelonious Monk and others called him a fraud and said he was “jiving” because of his refusal to improvise on the chord changes, but rather to play, as George Russell pointed out, in a linear fashion that explored harmony as a moving target rather than a baseline for improvisation. Coleman himself called it “harmolodics”; it wasn’t tonal or modal, but simply a way of playing lines in which the notes produced created their own harmony. I always wondered, when listening to his records, how on earth Charlie Haden kept up with them.

In Ghosts, a piece written by Albert Ayler, altoist Siegel goes off on a squawking, atonal rant, squealing his way through tortured lines. We also get a vibes solo by Karl Berger which just barely fits into the framework because he keeps trying to stay tonal while occasionally straying outside the “home key” bass notes being laid down by Bisio. Tomorrow is the Question features a pathetic, whispery vocal by something called Ingrid Sertso, but this is clearly one of the best tracks, musically speaking, on the album. The band plays joyously and sounds fully integrated. Just For You jumps nicely, with Pasin and Siegel playing the complex opening melody in unison, and here Siegel does a nice job of sounding like Coleman. Pasin, too, is especially excellent on this one.

When Will the Blues Leave? is one of Coleman’s best jump tunes, and Ornettiquette plays it extremely well. Whispery-girl returns to vocalize along with the band on the opening line, following which she sings a fairly predictable and equally whispery scat solo. I can’t tell you how much I just wanted her to shut the hell up; she literally ruins the track. Where do they find these people? In a police line-up? Unfortunately, she also returns on, and ruins, Lonely Woman, but happily they paid her and sent her on her merry way before wrapping things up with PTU.

A mixed bag, then. Ornettiquette is clearly a band devoted to its mission, Pasin is an absolutely terrific trumpeter, and his band mates play well if sometimes lacking oomph. Recommended for those who enjoy Coleman’s style of jazz, with the caveat about Sertso’s “singing.”