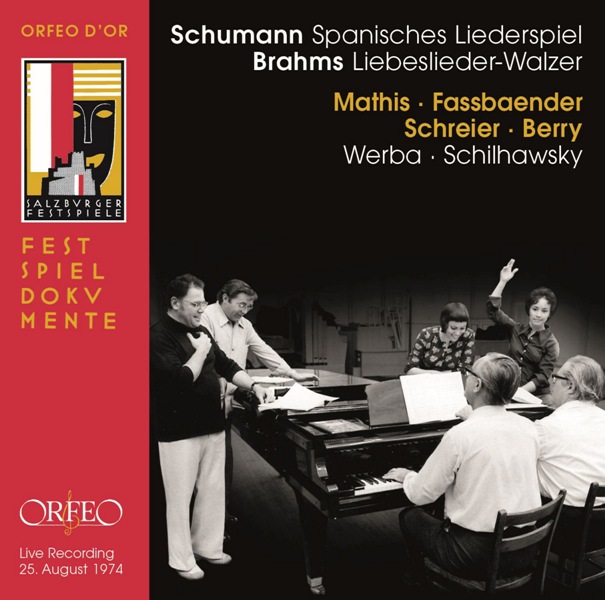 The tape from which this CD was made came from a somewhat intimate lieder evening late in the 1974 Salzburg Festival. As noted in the booklet, end-of-festival concerts such as this tend to be poorly attended as the audience that came for the opera productions have mostly already left, yet the Wiener Zeitung gave it a glowing review. Here it is at last in a commercial issue.

Neither set of songs call for deep interpretations. Schumann’s Spanish Song Book, of which I was formerly unaware (having been immersed in the Wolf version for so many decades), consists of light songs clearly written for entertainment value. Of the nine songs, only two are solos, “Melancolie” for contralto and “Geständnis” for the tenor, the rest being duets and quartets. The star singers involved worked hard to blend their voices though Edith Mathis’ heady, vibrant voice has a hard time fully blending with the smooth tones of the other three. I’m not saying this as a criticism of Mathis, whose singing I’ve greatly admired over the decades (much more so than her counterpart in light soprano roles at the time, Helen Donath, who to me was a singer without much purpose). When she gets a long solo stretch, as in the duet “In der Nacht” with Peter Schreier, she sings expressively indeed, but blending with other voices was a problem for her just as it was for such similarly “heady” sopranos as Marcella Sembrich, Gré Brouwenstijn and Cristina Deutekom, all of which I admired yet none of which could drain the vibrato from their voices even in soft passages.

There’s nice natural “space” around the voices that aids in the listening experience. I have it on good authority from someone who heard him in person that Schreier’s voice was very small, yet in an intimate setting such as this he seems to have no problem holding his own against such larger voices as those of Fassbaender and Berry, both of whom sang Verdi and Wagner in addition to Mozart. The two solo songs are clearly the highlights of the set, with Fassbaender sounding quite imperial and commanding with her big, powerful mezzo voice and Schreier’s great intelligence in phrasing making much of “In der Nacht.” It should, perhaps, be pointed out that Erik Werba was a particular favorite of Schreier’s. “Botschaft” is particularly well suited to Mathis’ voice with its leaps and scale runs.

This performance of the famed Liebeslieder Waltzes reminded me of the live version from the 1960s with Heather Harper, Janet Baker, Peter Pears and Thomas Hemsley, accompanied by Benjamin Britten and Claudio Arrau, except that, this being Vienna, they take some of the music at a slower clip and introduce more rubato into the proceedings, which damages the structure of the series somwwhat. Schreier’s voice is prettier in tone than Pears’ if not as richly blended. Much to my surprise, Mathis seems to blend a little better here than she did in the Schumann cycle. The quartet does a particularly wonderful job with “Ein kleiner, hübscher Vogel.”

An interesting release, then, recommended for fans of the solo singers.