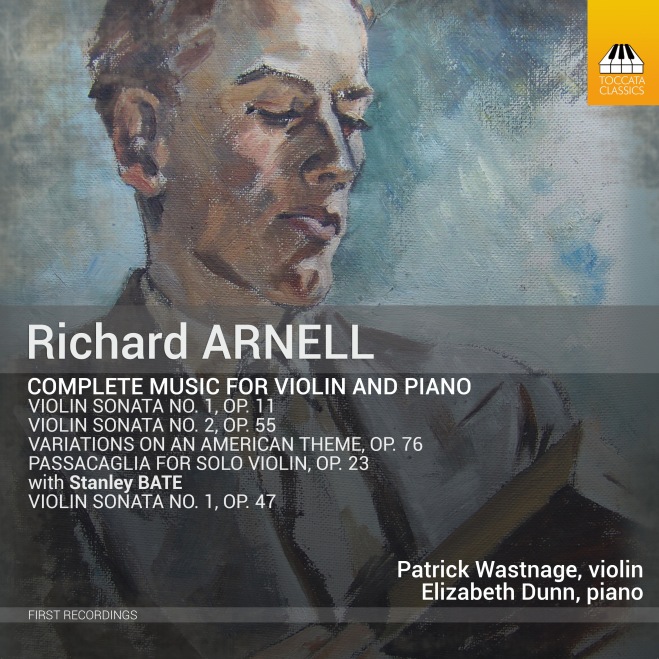 Toccata Classics is a label that specializes in the music of British composers, many of them barely known even in their home country. In this instance, the complete violin & piano music of Richard Arnell (1917-2009) was so sparse that the disc had to be filled out with a violin sonata by Stanley Bate (1911-1959).

Arnell’s music is typical of modern British music of the 1940s and early ‘50s: lyrical yet with modern harmonies to add interest. He was a fine craftsman and knew how to construct well-written pieces, yet what makes the music work here are the performances of violinist Patrick Wastnage and pianist Elizabeth Dunn, both of whom really dig in to it with energy.

The opening movement of the Violin Sonata No. 2, which starts off this disc, is typical: despite the tempo designation, Arnell vacillates between “Vivace” and “Moderato,” even using some decelerandos and a few full stops in the music flow, yet all of it is logical and fits together very well. In the slow movement, he introduces an odd stepwise pattern in the piano’s bass line that is briefly used as a transitional motive. The finale, too, has a certain quixotic feel about it that keeps the listener on his or her toes while listening.

The same aesthetic is heard in his Variations on an American Theme. As the liner notes confirm, Arnell’s “American theme” seems to be a sort of generic idea of his of what an American theme should sound like and not anything that is easily identifiable. Although composed in either 1953 (according to the CD inlay) or 1955 (according to the liner notes), it was not premiered until 1962, by which time Arnell’s musical style was surely considered passé.

Oddly, Stanley Bate’s violin sonata almost sounds like a carbon copy of Arnell’s style. It’s not a bad piece by any means, but it’s still a good piece. I was very much taken with Arnell’s Passacaglia for Solo Violin, an excellent piece and one of the most original on the disc. The final sonata, Arnell’s No. 1 for violin & piano, is a good piece but clearly not as good as his other works on this disc.

An interesting disc, then, if not consistently excellent in its musical quality.