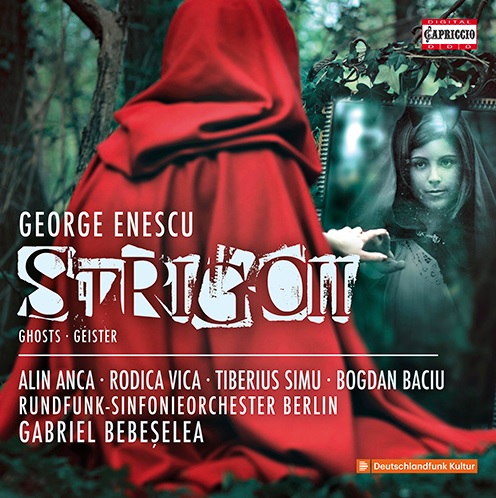 Here is a piece by Enescu that most people didn’t even know existed: his dramatic cantata Strigoii, or Ghosts, composed in the mid-1910s but lost during the first World War. The manuscript was only discovered recently and given to Cornel Târanu, who wrote the liner notes.

The text comes from a dramatic poem by Mihai Eminescu (1850-1889) about the premature death of King Harald’s bride. Much of the poem is sung by a narrator (bass) who explains that the grief-stricken king kneels beside his queen’s bier with bloodshot eyes, grieving for her, and then by Harald (Arald) himself, the tenor. Interestingly, Strigoii is translated into English here as “Ghosts” but in German as “Der Vampyr,” which suggests that his dead bride becomes not a harmless spirit but a vampire. The music is continuous, like Gurre-lieder or Bluebeard’s Castle, but broken into scenes, thus displaying Enescu’s skill in creating continuous musical narratives. Even more so than the Schoenberg and Bartók pieces, Enescu’s orchestral writing is the most complex and interesting aspect of the score. It does not so much mirror the vocal line as to provide a discrete soundscape over which the singing and narration occurs. Conductor Gabriel Bebeşelea, a name previously unknown to me, does a marvelous job with the Berlin Radio Symphony, bringing out all the drama and color of Enescu’s wonderful music. The only moment in the score that I thought sounded formulaic was the mundane major-chord ending of the second scene.

I was very unhappy with the wobbly voice of basso Alin Anca as the Narrator, despite his histrionic skills. For crying out loud, for a world premiere of a newly-discovered work by a major composer, couldn’t they come up with a consistently good group of singers? Fortunately, tenor Tiberius Simu has a splendid voice, clear and ringing, and likewise sings with great expression. Bogdan Baciu also has a magnificent voice, thank goodness, reminding me of some of the darker-sounding Slavic baritones I’ve heard.

Following Ghosts is an early Pastorale Fantasy for Small Orchestra, written when Enescu was only 18 years old (1899). It’s a nice, Romantic bit of writing, what I refer to as “GUCK music” because it’s the kind of thing you’d hear on my local classical music station, WGUC—tonal, Romantic, non-challenging to the intellect, but pretty.

The Pastorale may be a superfluous piece, but Ghosts is clearly a major work, and I’m very glad that Târanu was able to reconstruct it from Enescu’s formerly-lost manuscript. Well worth seeking out!