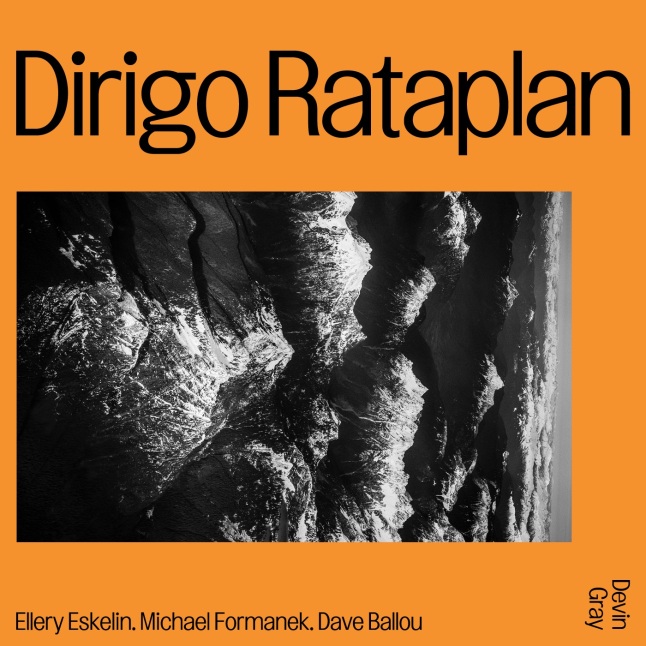 Despite the odd name of the group, Dirigo Rataplan plays somewhat straightahead, bop-influenced jazz with irregular meters thrown in for flavor, but they’re a really good group: tight, creative and with well-scored arrangements that make them sound like more than just four musicians. All of the compositions on this eponymous CD were written by the group’s leader, drummer Devin Gray.

The opener, Congruently, displays the band at its best, with trumpeter Ballou and saxist Eskelin playing lines that run opposite each other for a while, then in unison, then in harmony, then back again. And the melodic line just keeps changing and shifting. In the second number, Rollin’ Thru Town, the band really deconstructs the beat after the opening lick, slowing the tempo down and playing four different rhythms, one for each instrument, that somehow dovetail and make sense. Harmonically, the band leans towards tonality but occasionally plays outside notes, not so much that they lose the listener in a knot of noise but enough to keep the mind engaged. One interesting aspect of this performance is the work of bassist Michael Formanek, who now follows Ballou’s rhythm, now Eskelin’s, before falling into a more conventional 4/4 to coalesce the band at about the 3:15 mark, which lasts to the end of the track.

Trends of Trending has a sort of irregular bossa-nova beat, only more jazzified, with the two lead horns playing the odd melodic line in harmony, sometimes in outside jazz counterpoint à la Ornette Coleman, pulling both rhythm and harmony apart in interesting ways. This one almost sounds like a jazz band on acid. Staccato hiccups from the two horns interject themselves during Formanek’s solo.

Texicate begins as the most obscure and deconstructed tune on the CD, with Gray playing soft but complex patterns on drums while Eskelin’s tenor sax ruminates in the foreground. Eventually, Ballou comes in to add commentary here and there. The two horns then engage in a sort of staccato, contrapuntal dialogue with the bass joining them underneath. Oddly, they all somehow coalesce towards the end! By contrast, The Wire, though also exploring irregular meter, begins almost straightforward by comparison, becoming more complex as it goes along. Eskelin has a nice outside solo and Ballou almost sounds like Don Cherry in his solo excursion.

Quantum Cryptology is a slow, mesmerizing sort of piece with a slightly menacing undertone. Eskelin and Formanek play the opening chorus together, and later on Ballou plays an a cappella cadenza using descending chromatics to fill the gap between sections, then doubling the tempo while Gray plays brushes and snare drum underneath.  Eventually, a three-way conversation is set up between trumpet, sax and bass, now playing arco.

What we learn from cities has two different tempi, a slow one for the two horns and a faster one for the rhythm section, which don’t exactly match up perfectly, making for some metric dissonance (so to speak). The horns eventually fall in line with the quicker tempo, things get louder and more hectic, and the city learning becomes a sea of noise. A slow, disconnected mood also imbues The Feeling of Healing along with some edge-of-the-strings bass playing and somewhat cacophonic (but soft) licks by the trumpet and tenor sax. The music continues to deconstruct itself, moving into a passage played by what sounds like a large gong with sandpaper rubbed against the drum head and soft plucked bass, with the tenor and trumpet playing soft, whining figures around it. It isn’t so much the sound of healing, to me, as the sound of illness. Surprisingly, the musicians sort of come together at about the six0minute mark, near the end of the composition…evidently, the healing process.

A slow, dirge-like feeling is also evident in Intrepid Travelers, which again moves from disconnected phrases to a coalescing melody with development. Micro Dosage begins with odd, scattered figures strewn about the soundscape by trumpet and sax over rhythmically displaced bass and drums, which eventually become a rather menacing but still out-there group lick which ends the album.

An utterly fascinating excursion by this very talented band.