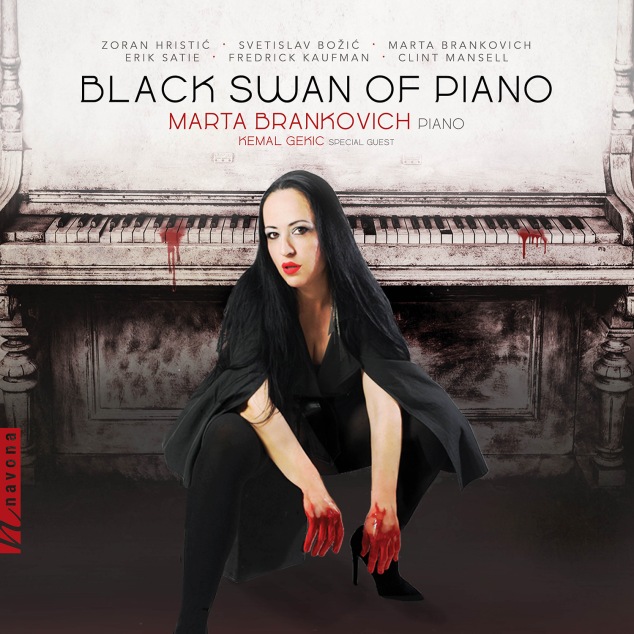 Navona Records and its sister label Parma are the new trend of classical CDs nowadays, labels that produce records paid for by the artists themselves. The upside is that they have a pretty good distribution system, including through Naxos of America. The downside is that they have what I can only describe as inadequate liner notes, which tell you very little about the composer or compositions included. This is a bit frustrating for the reviewer when most of the music is new, as in the case of this CD. The following is what you get, which is largely a brief recap of the music:

Victory and War are the first of Brankovich’s own compositions, but with her sharpened technique combined with an emotional drive, the pieces play like those by a seasoned composer. The works are directly inspired by melodies heard during her childhood in Serbia and the dramatic choral elements found in the Kosovo region. Her melodies refer to “the screams of the lost souls that vanished in the wars during the 90s in the Balkan region.” These compositions are dedicated to the innocent victims of violence during that dark time in her homeland.

Throughout the album, Brankovich intertwines Serbian and Western techniques with her own experimental style. The piano is stretched to limitless sonic possibilities thanks to Brankovich’s application of phrasing, tension, and mood. The solo pianist fills the soundscape effortlessly, allowing chords and melodies to linger. This is especially present in Božić’s Lyric of Athos and Mansell’s Lux Aeterna, originally composed for the 2000 film Requiem for a Dream. The album also consists of works by acclaimed composer and professor Fredrick Kaufman, Metamorphosis and Yin and Yang. Kaufman’s compositions provided key inspiration for Brankovich’s debut album, and she is joined on Yin and Yang by the notable pianist and scholar Kemal Gekić.

I admit to feeling that the gory cover, showing Brankovich sitting in front of a piano with blood dripping from both her hands and the keyboard, was immediately off-putting to me. I’m not a child and I do not respond to puerile images very kindly. But Brankovich is clearly an exciting pianist, very much at home in this modern idiom with its percussive qualities. She has a bright tone and a sterling technique: not just fast, but she articulates well. And the opener, Hristić’s Toccata, is a quixotic piece with varying sections and a fascinating underlying structure. The ensuing Lyric of Athos by Božić is a very Eastern European sort of piece, with Eastern harmonies and a lyric quality about it which Brankovich imbues with fire.

The pianist’s own composition, Victory, sounded similarly Eastern in harmonic bent and similarly lyric in scope, although with an insistent bass line on a repeated low A-flat (later shifting to E an octave up) over which she seems to improvise. I found the structure weak, however. War sounds like an extension of Victory, but is a tighter piece and to my ears more interesting.

I was utterly fascinated by her approach to the Satie pieces: somehow, she managed to give even these French works an Eastern European by her accents and phrasing. Certainly not a standardized approach to this composer, to say the least! I was, however, singularly unimpressed by Kaufmann’s Metamorphosis, a rambling sort of piece that starts nowhere, goes nowhere, and ends nowhere. Even the busy middle section sounded confused to me. In the same composer’s Yin and Yang, Brankovich is joined by pianist Kemal Gekić, but the music isn’t much of an improvement (although it is more atmospheric).

The final piece, however—Mansell’s Luz Aeterna—is quite a good piece for film music, and once again Brankovich imbues it with her Eastern European passion.

A mixed bag, then: excellent playing throughout, and some very interesting pieces and performances, but a few weak links.